Imagine this: Your electrical panel is in your neighbour’s basement.

Their house, located across the back alley, goes up for sale every four years, and you have no idea who is going to move in. The new owner could be your new best friend or an insensitive curmudgeon who threatens to cut off your power by throwing the main breaker switch. You’re an energy hostage to your neighbour.

But it gets more troublesome. The neighbourhood power plant is a couple of houses down, on your side of the street. You would like control of your energy supply, but you learn at the block party that nobody is willing to reroute wires so you can put the control panel back in your own home. The existing wires in the ground also belong to a regulated monopoly, so you have no competitive alternatives.

Welcome to the Line 5 fiasco.

Instead of wires and electrical power, the well-publicized standoff between Central Canada and the state of Michigan is about an Enbridge Inc. pipeline that carries oil, propane and other fuels vital to provincial economies on our side of the alley. The energy artery, built in 1953, carries 540,000 barrels of Western Canadian oil through a U.S. shortcut on the south side of the Great Lakes. Central Canada taps back into the system when the oil gets repatriated in Sarnia, Ontario. 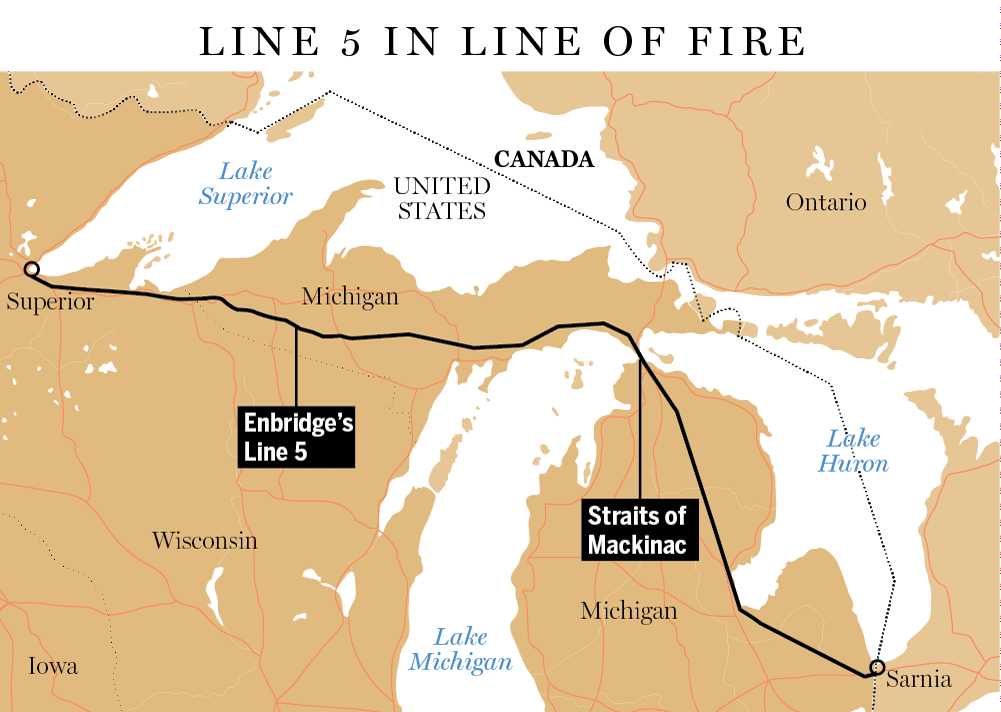 Right now, the state of Michigan is trying to flip the breaker switch — the details are not important for the purposes of this article. The point is Canada is not in control of its vital energy supplies.

We tend to think geopolitical threats to oil supply exist only in far-flung places such as the Straits of Hormuz, the Suez Canal or the Straits of Malacca. Maybe the International Energy Agency will add the Strait of Mackinac to its famous list of seven global oil transit chokepoints.

But let’s move on and not belabour this absurd situation that’s been brewing for years.

As Canada embarks on repiping and rewiring energy systems in the pursuit of decarbonization, let’s ensure the next seven decades of energy infrastructure are more secure than the last seven.

#1: Avoid putting the breaker box in someone else’s basement. It seems obvious, but in a world where countries are increasingly vulnerable to supply chain shocks, having full sovereignty over vital energy systems is a must.

#2: Create an environment for energy competition. Customers should have choice of suppliers. Price is optimized through competition. From a security standpoint, supplier competition also creates optionality; in other words, backup delivery systems.

#3: Decentralize where possible. Historically, the centralized mega-utility model of grids and pipes has worked well. Advances in technology are making small-scale distributed energy systems more competitive. For example, community level power generation is now possible. Rooftop solar is an example of localized energy independence. Distributed and grid-based systems can work together to mitigate security risks. Decisions should focus on having less of the broad economy dependent on concentrated energy systems.

#4: Diversify to avoid concentration. Mobility has been the ultimate example of concentration risk. Society has been wholly dependent upon petroleum-based systems for over a century. When oil is cut off, there is little choice for getting from A to B. Biofuels offer diversification but lack scale for backup. Electric vehicles run off a separate system, so their adoption offers welcome resiliency to singular supply shocks. But all-electric isn’t desirable if large regions are susceptible to power outages. Energy security is achieved through creating a diverse system of choices.

#5: Conduct stress tests. In an era of greater cyber threats, susceptibility to natural disasters and unforeseen acts of political leverage, there should be an increasing emphasis on proactively recognizing vulnerabilities in current and future energy systems — and acting to remedy any deficiencies.

Peter Tertzakian is Deputy Director of the ARC Energy Research Institute and Founder of Energyphile (www.energyphile.org) in Calgary, Alberta .

Previous : Canada’s steel industry has a secret weapon that could soon beat China’s cheaper bids
Next : Can Canada fend off a Colonial Pipeline-like cyberattack?