Battery power may have seemed like the future of the automotive sector when William Morrison, a Scottish inventor, debuted his electric car prototype at a parade in Des Moines, Iowa, in 1888.

At the time, the gasoline-powered vehicles entering the market were bizarre, finicky things. They were noisy, emitted a strange odour and required a crankshaft to start the engine. Drivers complained that shifting gears was a nuisance.

It wasn’t until Henry Ford began mass-producing the Model T, first released in 1908, that the internal combustion engine (ICE) became the cheaper option for consumers. The ICE would go on to dominate the marketplace for more than a century, leaving a deep imprint on everything from the structure of the global economy to the modern design of cities.

But that dominance could finally be diminishing, in part due to a surge in electric vehicle (EV) sales from automakers such as Nissan Motor Co. Ltd., General Motors Co. and Tesla Inc. Improved battery technology and incrementally lower costs for EVs has in turn propelled the theory of peak oil demand, in which the world’s thirst for oil will soon stop growing, or even taper off.

Companies that generate revenues by digging up and processing the fossil fuel are left to ponder an uncomfortable question: Could the oil industry’s rapid rise end in an equally rapid fall?

Opinions on the potential of EVs widely range from dismissive naysayers to devout believers. But their growing clout has nonetheless raised questions in the oilpatch over what a shrinking market would mean, particularly for the Canadian oilsands where investor returns take longer than in other regions.

Industry observers say the answer is not entirely clear, especially at a time when it is difficult to separate EV hype from hard data.

Oil is still among the largest power sources on Earth, accounting for 30 per cent of total energy consumption, alongside coal (30 per cent) and natural gas (24 per cent).

Even a sharp decrease in demand for the ICE wouldn’t outright destroy the oil market: only about half of the 97 million barrels of oil the world consumes every day are used for land-based transportation fuels. The rest is used as feedstock in petrochemical plants, jet fuel, bunker fuel, lubricants, heating oil and other products.

Some oil executives in Calgary’s corporate headquarters dismiss peak demand theory, or at least see it as too far away to garner any deep consideration. But some major oilsands players, including Suncor Energy Inc. and Cenovus Energy Inc., are envisioning — though not especially fearfully — their business models in a “carbon-constrained” world.

“We do believe that oil demand will likely start to peak within 20-30 years at a level that is higher than today, and although demand will decline thereafter, we expect oil will still be needed for decades,” Suncor’s chief executive Steve Williams said.

Oilsands players have collectively made notable improvements in reducing carbon emissions and other pollutants in recent years.

Canadian Natural Resources Ltd., Canada’s largest oil and gas producer by production volume, cut back its overall emissions intensity by 5.6 per cent in 2015 compared to 2014.

Suncor cut its emissions by nine per cent during the same period. The company hopes to cut its overall emissions intensity 30 per cent by 2030, according to its most recent sustainability report to stakeholders.

Even so, the oilsands are still among the most energy-intensive supplies on the planet, and some analysts wonder if Canada’s heavy oil producers will be the first victims of more rigorous climate change policies.

“We know that Canadian oilsands are quite carbon intensive, so they could come under pressure there,” said Paul McConnell, an analyst at Wood Mackenzie based in London.

Unlike the early 2000s, a peak demand scenario would mean that fewer new sources of supply would be needed and less often.

“When you have a plateauing of demand, you’re going to have an environment where price spikes and things like that diminish,” Tertzakian said.

Big multinational producers, analysts say, would forgo megaprojects in favour of incremental developments to keep competitive in a shrinking market.

This is already taking place to some degree: companies including Imperial Oil Ltd., Husky Energy Inc. and Suncor are building smaller, lower-cost “replicated” oilsands facilities that can be built in modest 10,000 barrel-per-day stages and repeated. Large-scale developments, by comparison, were often in the 100,000 bpd range.

Those companies, and others, are also testing new technologies to cut costs and reduce their carbon footprints.

For example, they are injecting products known as solvents into bitumen reservoirs in order to produce oil using less steam, cutting back the amount of natural gas consumed in the process.

They are also installing sensor systems that better predict and monitor choke points and inefficiencies at their facilities, thereby boosting productivity and reducing needless emissions.

Every day, there’s a new technology being studied in our offices

Conventional producers across Western Canada are lowering their per-barrel costs by tweaking old technologies, such as improving their ability to inject high-pressure water into reservoirs to reinvigorate old wells — a process known as “waterflooding.”

They are also piloting new ones, like using more automation in drilling and completing wells, and installing higher-sensitivity sensors that allow geologists to drill the “sweet spots” in oil formations.

“Every day, there’s a new technology being studied in our offices,” said Grant Fagerheim, chief executive of Whitecap Resources Inc., a light oil producer mostly focused on assets in Alberta and Saskatchewan.

But the debate over EV adoption — and the resulting decline in the need for oil — is more a question of when, rather than if. Bloomberg New Energy Finance, a research group, estimates electric vehicles will become cost competitive with the ICE on an unsubsidized basis as early as 2025.

Even under such a scenario, however, some argue that rising populations in places such as Nigeria, India and Indonesia could counter any gains in EV adoption in the Western world.

Moreover, a plateau in oil demand around 2025-2030 would hardly eliminate the market for oil.

“That still leaves us with a staggering 100-million-barrel-per-day consumption at that time,” Tertzakian said.

In the near term, EV adoption will be gradual. Globally, there are about one billion small-to-mid-size vehicles on the road today, with about 80 million new vehicles sold every year. Even if every new car sold today were electric, it would take more than a decade to displace the entire global fleet.

“I’m very cautious about saying more rapid adoption can’t happen, because we don’t know what the technologies are going to look like in 2025 or 2030,” Tertzakian said. “But the near-term trajectories do not really support a rapid substitution over the course of the next decade.”

Longer-term projections become much less certain — and could shift much more rapidly.

The International Energy Agency predicts that 54 per cent of new vehicles sales will be electric by 2040, and EVs will make up 33 per cent of the global fleet.

If major centres for electric vehicle sales such as China begin buying EVs en masse, the world could see a more radical shift in the demand for oil, effectively eliminating a massive portion of the oil market in a matter of years.

Developing the ideal battery for an electric car is a tenuous balance between cost, safety and energy density, said Linda Nazar, a professor at the University of Waterloo in Ontario who is among the country’s leading researchers of battery technology.

Researchers have for years been altering the physical components of batteries in order to maximize their capabilities, creating different combinations of nickel, manganese, cobalt, aluminum and other metals to find more efficient flows of ions between a positive and negative electrode (the basic process by which batteries operate).

But finding the right mix is a painstakingly slow process. A cheaper battery might be less efficient, while a safer and more stable battery might have lower energy efficiency.

“Generally, you have to make compromises,” Nazar said.

But realizing that next step change in efficiency, some believe, is the crucial link in the mass adoption of electric vehicles.

The U.K., France and some small European countries have already pledged to ban petrol and diesel-based cars over the next few decades. Many others, from China to Canada, have pledged to put regulations or incentives in place to boost EV sales.

However, critics say many such proclamations are not accompanied by hard policy changes. And in the absence of incentives, sales appear to dry up: Tesla sales plummeted when Hong Kong authorities scrapped a tax break on EVs in February 2017. The removal of the incentive nearly doubled the retail cost of a Tesla Model S.

But if voters continue to favour tighter environmental policy to wean the economy off oil, EV sales are bound to surge if consumer incentives are offered and charging networks are expanded.

That would bring about a radically different world than the one oil producers have enjoyed for more than 100 years, and will put a hard cap on an industry that has spent most of its time growing.

In the meantime, oil producers are likely to continue incrementally cutting costs and reducing their carbon footprint, grudgingly preparing for a peak demand scenario, but hoping oil’s century-long reign will hold course. 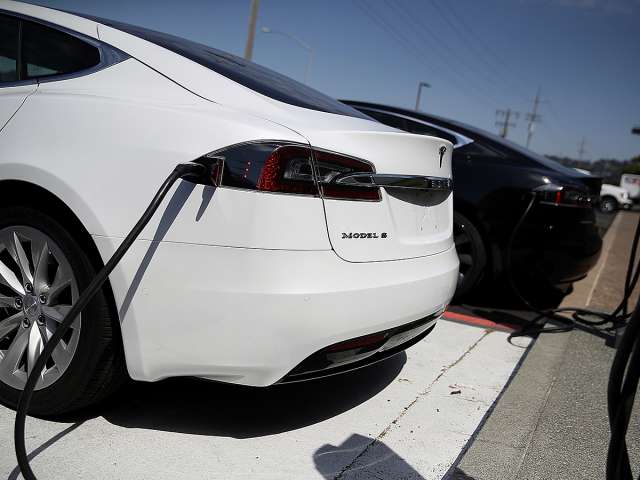 Previous : Canadian Home Prices Tumble Most Since 2008 Recession on Toronto
Next : Varcoe: Another puzzler in Alberta’s power contract mess