Legendary oilman Jim Gray has seen Alberta’s anger against Ottawa erupt when issues like the National Energy Program have boiled over.

But the fury usually subsides and the energy industry soon gets back to its knitting: producing oil and natural gas that is used across North America.

Today, the co-founder of Canadian Hunter Exploration is watching the resentment build again in Alberta’s energy sector over the country’s pipeline woes, the seeming indifference from Ottawa and the outright hostility from other parts of Canada, as the province struggles to get its oil to market.

“I admit the frustration levels are increasing,” Gray, a member of the Canadian Business Hall of Fame, said in an interview Monday.

“We must prevail and have to work this out together. And there has to be common sense (that) prevails here.”

The problems of the Canadian oilpatch have been well documented, from low commodity prices to barriers preventing new infrastructure from being built that could ship energy products out of the province.

The U.S. is frenetically ramping up energy output — it became a net oil exporter earlier this month, for the first time in more than seven decades, Bloomberg News noted. Meanwhile, Alberta will voluntarily cut back production to deal with a steep price discount for Canadian crude.

The contrast couldn’t be more apparent.

A report issued Monday by PwC pointed out the impact the price differential on Western Canadian oil is having on the sector in areas such as diminished foreign investment.

While industry capital spending south of the border increased 38 per cent to $128 billion last year, it sat at $45 billion in Canada, dropping from $81 billion two years earlier, the report noted.

You don’t have to be the Amazing Kreskin to see the anger bubbling up in the province.

The discount is costing the provincial and federal treasuries billions of dollars annually.

Last month, more than 2,000 vocal protestors showed up outside the prime minister’s speech in Calgary, demanding Ottawa “lay some pipe.”

“It unbelievable, the undertone of discontent,” said Brett Wilson, a Calgary entrepreneur and co-founder of the oil and gas investment firm FirstEnergy Capital.

“I love Canada, I want Canada to work together, but I’m also one of those people who doesn’t see a palatable outcome right now.”

Adding fuel to this fire are unhelpful comments from Quebec Premier Francois Legault, who insisted Friday his province wouldn’t accept an oil pipeline like Energy East running through Quebec. (New Brunswick’s premier would like to see the project revived.)

Setting aside the fact Energy East was shelved a year ago or that provinces don’t have a veto on such matters — interprovincial pipelines are a federal responsibility — Legault’s abrasive assessment has rankled many in the province. 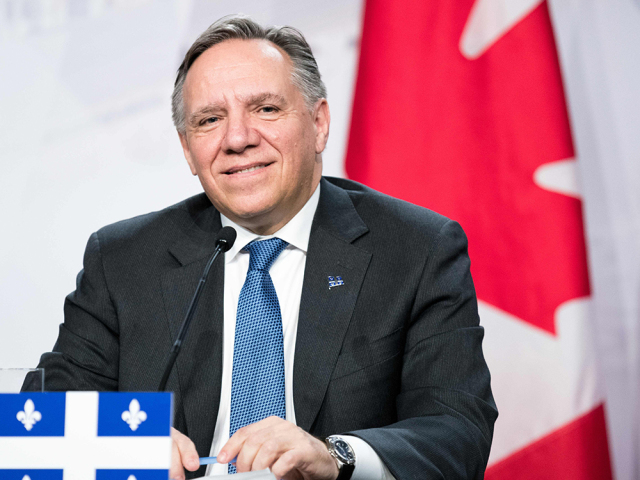 “There is no social acceptability for a pipeline that would pass through Quebec,” he told reporters, adding Quebec is willing to sell hydroelectricity to other provinces.

“I am not embarrassed to refuse dirty energy, while we are offering clean energy at a competitive price.”

Well, that’s one heck of a lousy way to find new customers.

It is, however, a sure-fire way to throw kerosene on to discontentment in Western Canada, as some Albertans worry about the industry’s future while the world moves to decarbonize, while still needing energy.

It misses the point that Alberta has capped overall greenhouse gas emissions from the oilsands.

And it avoids the inconvenient truth that Quebecers, just like the rest of Canadians, rely on oil. In 2016, the province’s demand for refined petroleum products averaged 355,000 barrels per day, about one-fifth of total Canadian demand.

“We produce oil to the highest standards of the world,” Energy Minister Marg McCuaig-Boyd said Monday.

“I get frustrated when I hear those comments and yet, they are importing oil from Saudi Arabia.”

Finally, the federal government revealed this week the scope of equalization payments for the provinces next year: Alberta remains a have province given the strength of its economy, while Quebec will receive $13.1 billion in 2019-20, up more than $1 billion.

That triggered the age-old debate about whether Alberta is being treated fairly.

Gray said he’s offended by Legault’s comments, noting a good chunk of the country’s source of wealth for equalization over the years has been generated by oil and gas development.

“I haven’t seen Quebec say they would refuse the money that is coming from the oilsands, from energy, (and) coming from these sources of energy they find so distasteful. Well, they don’t find our money distasteful,” he said.

“Yet, they have the hypocrisy to say they’ll stand between New Brunswick and Alberta in a pan-Canadian solution to a problem,” he said. “That is not the Canadian way and in fact it threatens the very effectiveness of the economy.”

Gray credits the Trudeau government for spending $4.5 billion to buy the Trans Mountain pipeline — now stuck in legal limbo — and agrees with the prime minister that short-term solutions to the problem are complex.

But it doesn’t mean that Ottawa is impotent to help.

Pulling Bill C-69, which will oversee environmental assessment of major energy projects such as pipelines, would be a start to address the concerns of the province and industry.

The Trudeau government could put some money towards buying rail cars and locomotives to bolster the oil-takeaway capacity from Alberta.

“It’s a Canadian tradition to blame the federal government and they haven’t done enough,” Gray added.

“We haven’t done a good job talking to the average Canadian taxpayer in every province of this country about the importance of our industry. . . There’s not a lot of trust out there for our industry and for our province. And there’s plenty of blame to go around.”

Yes, there’s a lot of fault to be assigned in this economic debacle.

There are just not enough pipelines.

And, apparently, not much sympathy from some quarters.