The head of oilsands giant Suncor Energy isn’t pulling any punches about Line 5.

The threatened shutdown of the pipeline by the state of Michigan won’t just hurt oil refiners, but consumers in Canada, says Mark Little.

“This is a significant month because the governor has called for the line to be shut down. We don’t think that they have the authority to do that,” Little said Tuesday on a first-quarter earnings call.

“If this line gets shut down, it takes half of the oil that flows into Ontario refineries and stops it from flowing there. This will have a consequence on the people in Ontario and Quebec.”

Built in the early 1950s, Enbridge’s Line 5 pipeline ships 540,000 barrels of oil and natural gas liquids from Western Canada to refineries in Ontario, Quebec and the U.S.

The federal and provincial governments, along with the Canadian oil industry, oppose Michigan’s order that Line 5 stop operating by May 12 — something Enbridge has said isn’t within the state’s authority to dictate.

The pipeline, which runs under the Straits of Mackinac, transports oil through Michigan to Sarnia and is essential to Canadian petroleum producers moving their oil to market, as well as refiners and consumers in the region.

Citing safety concerns, Michigan Gov. Gretchen Whitmer’s office gave notice in November the state would revoke an easement that dates back more than six decades and allows the pipeline to cross under the straits, which connects Lake Huron to Lake Michigan.

(The company has proposed constructing a tunnel for the Line 5 portion that runs under the straits, while noting the existing line has operated safely for decades.) 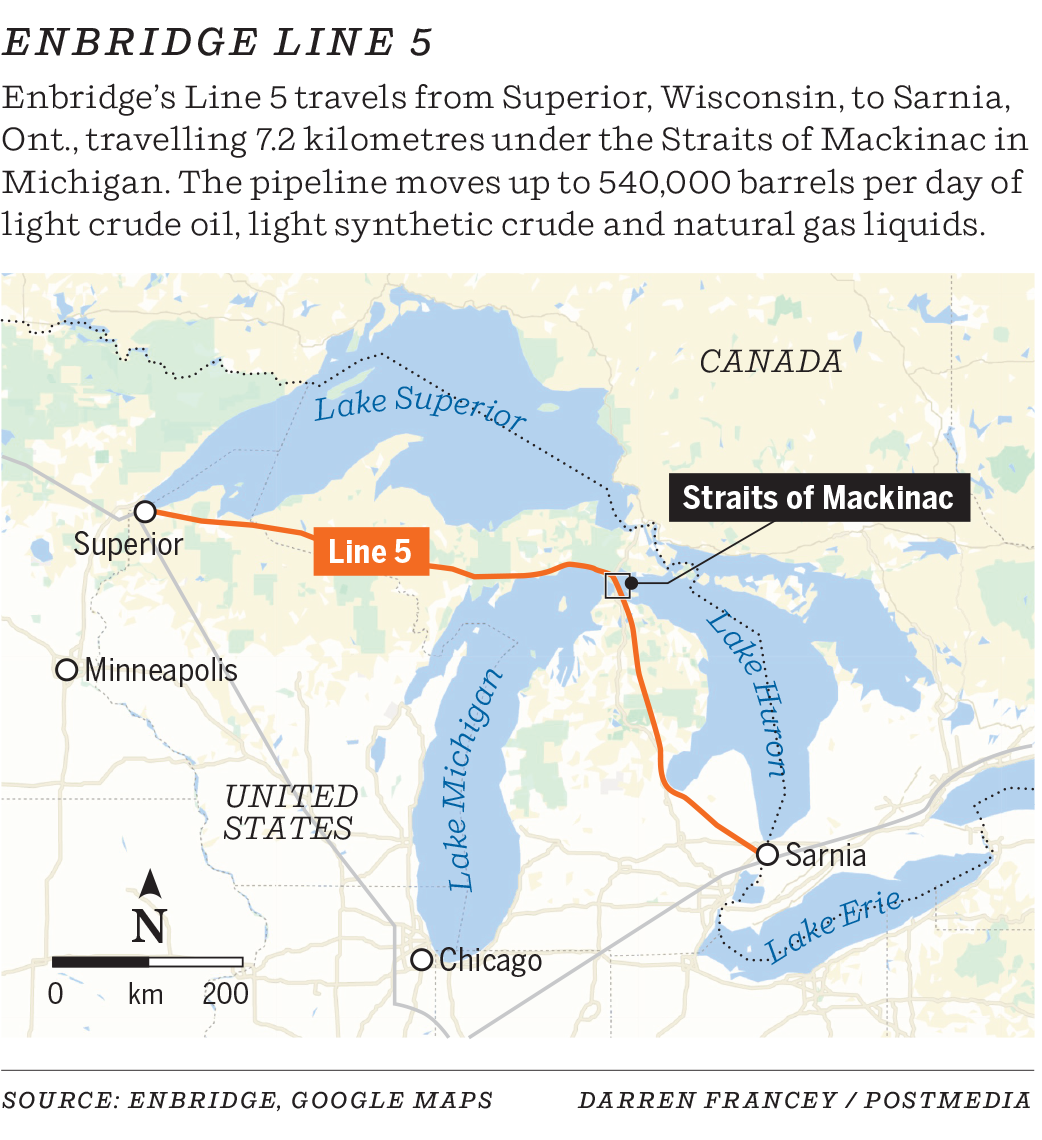 Enbridge has challenged Michigan’s order in U.S. federal court, maintaining the state lacks the authority to shut down the pipeline as oversight rests with the U.S. Pipeline and Hazardous Materials Safety Administration.

A judge ordered the two sides to work with a mediator to seek a resolution and additional meetings have been scheduled.

“We will not stop operating the pipeline unless we are ordered by a court or our regulator, which we view as highly unlikely,” Enbridge’s Tracie Kenyon said in a statement.

The attempt to shut down the line has commanded the attention of federal and provincial politicians across the country, given the potential fallout.

If operations are halted, Enbridge notes refineries in Ontario, Quebec, Ohio, Pennsylvania and Michigan would receive about 45 per cent less oil from Enbridge than they currently demand. Line 5 supplies about half of all propane demand in Michigan.

The pipeline is clearly critical for consumers — and blocking it would cause a lot of unnecessary angst.

“All you are doing is artificially constraining the market. . . . When you do that, there is going to be a product shortage. It is going to increase prices and hit consumers,” Little said in an interview.

“This is a hit to the economies and it’s being generated by this action by the governor.”

While Suncor has contingency plans to continue supplying its refineries in Montreal and Sarnia, these measures would increase the expense of doing so.

“The tougher it is to get into the marketplace, the more constraints you throw up . . . the higher the price goes,” Little said. 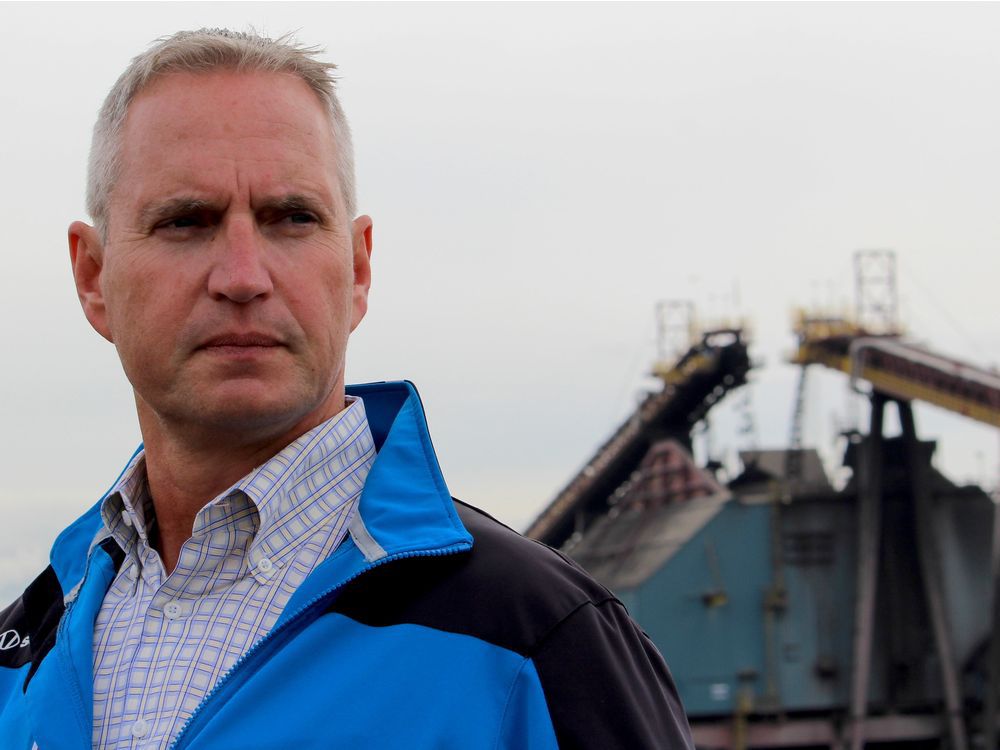 Last week, Imperial Oil CEO Brad Corson said the integrated producer is closely watching the Line 5 situation as the company uses the infrastructure to move oil to its refineries in Sarnia and Nanticoke, Ont.

Imperial also has plans ready in case the pipeline is shut down, although Corson views that as a “low probability” event.

Analysts say a disruption in Line 5 would hit consumers in the region and the effect would ripple across Canada.

A recent report by the industry consultancy Kent Group said refineries would need to find other, more expensive sources of oil if Line 5 is blocked, which would translate into higher diesel and gasoline prices in Ontario and Quebec.

“There will be a short-term spike in pricing and we think that will be six to eight cents a litre,” Vijay Muralidharan, a senior consultant with the Kent Group, a Kalibrate company, said in an interview Tuesday.

“It will be first felt in Ontario, but . . . the price increase will flow through across Canada.”

After a sharp rise in gasoline and diesel prices, other fuel supplies would likely flow into the region and ease some of the pressure, he added.

If a disruption lasted long enough, it could also affect petroleum producers by widening the price discount for western Canadian crude as oil becomes stranded in the region due to a transportation bottleneck.

Jackie Forrest, executive director of the ARC Energy Research Institute, noted there is excess crude-by-rail capacity available to move barrels to market today, but it’s likely not enough to cover all of the shipments moving on Line 5 for a protracted period of time.

“It would have knock-on effects on Canadian heavy oil prices,” said Forrest.

“It would reduce the amount of crude oil that we can put into our export pipelines and we already have quite a tight situation here.”

None of these outcomes is tenable. The pain would be felt in many parts of the country if the pipeline is suddenly stopped.

For Canada, the struggle over Line 5 continues as more voices speak out.