Firefighters struggling to contain the Alberta oil sands area wildfire are in the midst of the blaze as well as surrounded by explosive chemicals and compounds that are critical to extracting oil. Facebook photo.

EDMONTON/CALGARY, Alberta, May 24 (Reuters) – Fighting massive forest fires is dangerous and taxing enough, but those sent into the Alberta oil sands are not only wrestling with one of the worst wildfires in the country’s history. They are doing it surrounded by the volatile, explosive chemicals and compounds critical to pumping oil from some of the world’s largest reserves.

Now in its third week, the fire’s proximity to the billions of dollars worth of oil equipment, flammable liquids, and extraction sites had people fearful that the flames, which can jump as far as more than a kilometer with gusts of wind, could do catastrophic damage to critical infrastructure.

Dozens of safety workers and industrial firefighters are working at places like Syncrude and Suncor Energy’s upgrading facilities north of Fort McMurray surrounded by flames burning to the edges of the oil sands, facing temperatures running as high as 1,100 Celsius (2,000 Fahrenheit).

The heavy bitumen in the oil sands themselves is not flammable, but the facilities and people inside are at risk.

“The most harrowing moments were when we first arrived on scene, dealing with these forest fires growing on you, flames jumping fifty feet in the air,” said Aron Harper, 35, a firefighter and emergency medical technician employed by Suncor, who lives in Fort McMurray, Alberta province’s main oil hub.

“We were yelling at guys to get out of there because the thing was growing so fast. I’ve never seen a fire grow that fast in my life.”

Firefighters do not measure forest fires by temperature, but by a measure known as “head fire intensity,” said Travis Fairweather, Alberta wildfire information officer. It is calculated as the rate of heat energy released over time at the front of the fire, and this fire at times reached five times a level considered extreme, he said.

Almost half of Alberta’s 2,351 firefighters have been assigned to Fort McMurray and oil companies have drafted industrial firefighting specialists to protect operations in the area, where about one million barrels of capacity has been shuttered.

These specialists are armed with special foam used to spray exposed equipment and sprinklers that can cover distances of 150 feet (45.7 m).

In Alberta many facilities are built with protection against such fires. This includes firebreaks around them, where vegetation is cleared and replaced with pavement or gravel to stop the progression of fire. 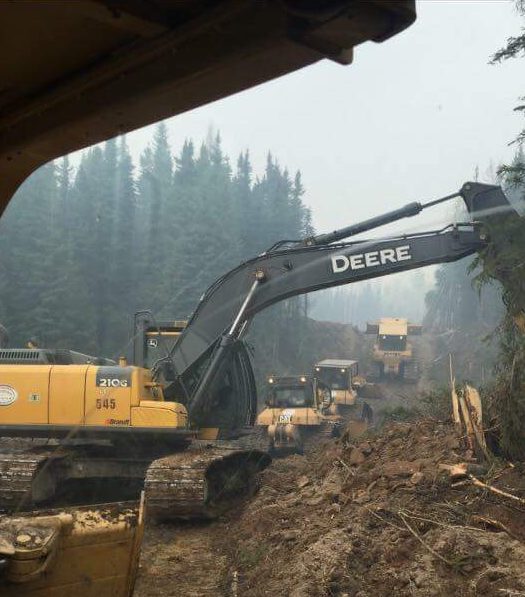 Alberta oil sands companies are clearing vegetation around their operations in an effort to widen their firebreaks.  Facebook photo.

But with this fire, companies including Enbridge and Suncor had to enhance their buffer zones by widening firebreaks. Philip Haggis, a wildfire technologist with the province of Alberta, found himself driving an all-terrain vehicle over blackened earth and through smoke-filled forests, leading a small convoy of bulldozers in containing the fire surrounding them.

Haggis was involved in protecting a Brion Energy Corp facility northwest of Fort McMurray. He was a “dozer boss” for the first week of the fire, supervising a team that removes vegetation – what he calls “fuel” – from the path of the blaze to prevent its spread.

The fire shifts without warning, and at least one team has been caught off-guard in a dead end.

“They got overtaken by fire,” Haggis said. “They had to get evacuated and some of their equipment got burned up.”

Enbridge Inc, which saw a fire come within just one kilometer (0.62 mile) of its Cheecham crudeoil tank farm, said it has not yet had to use a foam perimeter at its facilities but did spray tanks down with water to protect from the fires.

Early last week, after the fire forced the evacuation of thousands of workers from oil sands sites, Harper was tasked with securing the perimeter of Suncor’s facilities from behind the wheel of a massive 8-wheeled “ARFF” fire truck (aircraft rescue and firefighting) with a built-in 3,000-gallon water tank linked to a water cannon operated by a crew member.

For days they drove up and down a 10 km-stretch of highway adjacent to the plant, with the fire raging on the other side, and would beat back encroaching flames to make sure the fire didn’t jump the highway onto Suncor’s land.

“The major concern was if it ever jumped the highway. There’s a lot of valuable stuff behind us that you definitely can’t have catch fire,” he said.

“The weather, it was so dry, the wood so dry, the wind, everything was working against us. You think you’d have (the fire) out and you’d turn your back and you’re like, holy shit, this fire would come right back to life.”

(Reporting by Liz Hampton in Houston and Edmonton, Eric M. Johnson and Nia Williams in Calgary and Ethan Lou in Toronto; Editing by David Gaffen and Tomasz Janowski)

Previous : We need to care more about how our government spends
Next : Pengrowth Announces Closing of $300 Million Olds/Garrington Area Asset Sale