Albertans of a certain vintage will remember the finer moments of Stampede Wrestling when the Masters of Disaster or British Bulldogs would deliver a sudden one-two blow to an opponent.

Flying from the top rope, Duke Myers or Dynamite Kid would slam into their foe, before tagging right back out.

Alberta’s oil curtailment debate feels a little bit like that these days.

On Wednesday, Suncor Energy CEO Steve Williams climbed into the ring, criticizing curtailment and calling for the Notley government to get out of it.

Williams wasn’t quite as fiery, but his critique hit on a similar theme: the dangers of unintended consequences.

“I am disappointed in the fact the Alberta government has got us into this situation, but we’re working with the government to make sure the unintended consequences are minimized,” Williams said on a call to discuss Suncor’s fourth-quarter financial results.

“Our advice to government has been, you are seeing these impacts . . . and it’s time to start planning for what we call a soft landing or a soft exit.”

Imperial Oil CEO Rich Kruger: “What we are seeing is that capital is flowing, it’s just not flowing here.”

Many petroleum producers favour the strategy, which began in January with a 325,000 barrel-a-day cut.

Yet, integrated producers such as Suncor, Imperial and Husky Energy that benefit from lower feedstock costs for their refining operations oppose the measure.

They’re concerned curtailment will affect the investment climate and believe it’s already having a negative effect on the economics that support moving crude out of Alberta by rail.

Imperial reduced its oil-by-rail shipments from 168,000 barrels per day (bpd) in December to less than half that amount in January. It expects the figure to approach zero this month.

“Suncor seemed to be a bit more diplomatic in their approach to it, but it’s the same message,” said analyst Jennifer Rowland with Edwards Jones.

“You can in the short term solve the (price) differential issue, but if you are not solving the transportation issue, you haven’t done anything in the long term.”

Listen to Chris discuss curtailment in the weekly Inside Alberta podcast below:

Curtailment was designed to address the massive price discount for Western Canadian Select (WCS) heavy oil caused by ongoing pipeline constraints, and to reduce about 35 million barrels of oil inventory in Alberta.

The price differential between WCS and benchmark West Texas Intermediate crude had more than doubled from an average of US$19.70 a barrel last August to $45 in November, according to provincial figures.

As the price contagion spread to other grades of Canadian crude, lowering revenues for producers — and royalty payments to the province — Notley announced pro-rationing would be temporarily instituted in January and reviewed monthly. 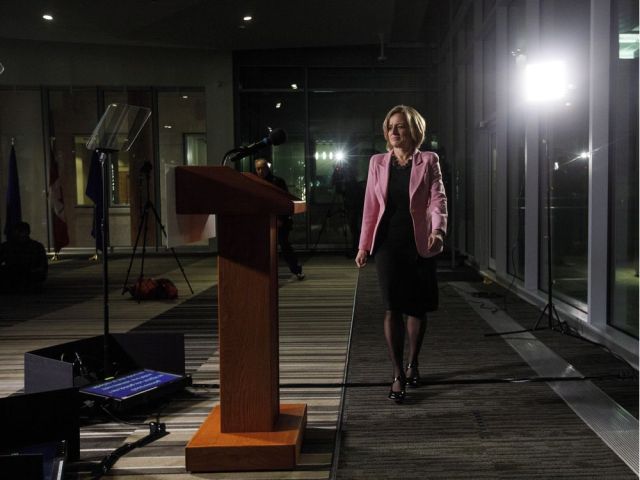 Premier Rachel Notley is pictured during her announcement in December that the province would mandate a cut to oil production.

The price discount has fallen below $10 a barrel in recent weeks and the sudden shift has undercut oil-by-rail economics.

As Kruger explained, the differential needs to be in the range of $15 to $20 a barrel to warrant the additional cost of sending crude by train to the U.S. Gulf Coast.

“The rail economics are seriously damaged and a lot of the rail movements are stopping or have stopped. That is going to have the opposite impact to what the government wants.”

The province will open up the oil taps a bit in February, allowing companies to produce an additional 75,000 barrels per day above January’s level.

The premier noted oil storage levels in Alberta had fallen faster than expected in January. Analysts question whether that trend will hold.

According to research firm Genscape Inc., western Canadian oil inventory levels decreased on par with the 325,000 bpd cuts in January, but a different story is shaping up this month.

With rail shipments declining, more oil will wind up in storage — it’s already up seven per cent since Jan. 25 — undercutting the curtailment strategy. 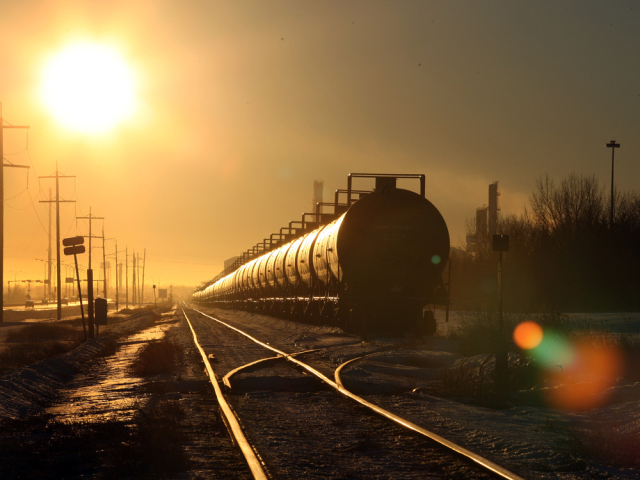 According to research firm Genscape Inc. crude-by-rail loadings in Western Canada fell by more than half last week.

“If you take rail capacity away, even with the curtailment, you’re still going to produce a certain amount of barrels,” Genscape crude analyst Mike Walls said in an interview.

“And if those barrels don’t get on the train to leave Western Canada due to economics, then those barrels will end up in inventory, which will essentially slow down the impact of any government-mandated cuts.”

A spokesman for Energy Minister Marg McCuaig-Boyd said curtailment is working and the province will closely monitor the situation and make adjustments as necessary.

It’s worth pointing out both Imperial and Suncor are large oilsands producers and they’ve also benefited from higher oil prices for their product.

So has the provincial government and every Albertan.

Every $1-a-barrel contraction in the price discount over the course of a year is worth $210 million to the provincial treasury.

But the complexities of trying to manage the market without destroying rail economics must be carefully scrutinized in the coming weeks.

Every action has consequences. The province can’t afford to get it wrong.

Williams said he hopes to see a fair and transparent end to curtailment, which was initially expected to continue throughout 2019.

“A signal we are trying to get into government is find a way out of this, because this is going to start to look very difficult.”

Previous : A huge oil and gas deposit, three times the size of past finds, has been found off fuel-starved South Africa
Next : Washington Governor will try to influence Trans Mountain ‘every way’ it can