Total Energy Services will shutter branches in Western Canada for the first time in its history — and CEO Daniel Halyk isn’t pulling punches about what’s wrong with the state of the country’s energy sector today.

Oil and natural gas prices in Canada are suffering steep price discounts because of a lack of pipelines, while the federal government’s new Bill C-69 to overhaul major energy project reviews is expected to exacerbate the challenges.

Regulatory and tax changes have contributed to higher labour, to rising fuel utility expenses and to other operating costs.

The oilfield services firm recently made the decision to close five branches this year after assessing anticipated oilpatch activity in Western Canada, along with the outlook for its growing business south of the border and the recent delays to the Trans Mountain pipeline expansion.

In an interview Monday, Halyk said it was a difficult decision to close the rental and transportation service branches, which provide field support for companies drilling and completing oil and gas wells.

But it had to be done.

“I am looking forward and saying we can’t build pipelines, governments are putting more stringent and uncertain hurdles in front of private capital that wants to build this infrastructure,” said Halyk, whose company employs about 3,200 people.

“The final straw was when we can’t get a pipeline, that some have described as a no-brainer, built…. As a Canadian it sickens me. But as a business person, you go where the work is.”

Halyk’s comments come as the Canadian oil and gas sector is experiencing what some in the industry are calling an “existential crisis” about its ability to grow and what they see as a lack of federal support.

The province is looking at short-term options to unclog the transportation bottleneck to move more oil out of Alberta, but there are no easy fixes.

Due to a lack of energy infrastructure being approved and built over the past decade, Canadian oil pipelines are already full. In turn, Western Canada crude prices have tanked in recent months.

The price for Western Canadian Select oil hit an all-time low last week and its discount to benchmark U.S. crude for December delivery sat at US$42.95 a barrel on Monday, according to Net Energy.

All this comes as global oil prices have dropped because of higher international output  and growing inventory levels.

“There is too much oil again and it’s clear…there will be too much oil in the market, particularly in the first half of next year,” said Judith Dwarkin, chief economist with RS Energy Group in Calgary.

In Alberta, the situation is exacerbated by pipeline problems.

The price differential is now so large, several producers — including Canadian Natural Resources and Cenovus Energy — have called on the Alberta government to temporarily curtail oil output to allow the price discount to ease.

Premier Rachel Notley said Monday the government has a number of options to consider, and no alternatives have been being taken off the table.

“Right now, time is of the essence,” Sonja Franklin of Cenovus Energy said Monday in an e-mail.

“We continue to believe the only effective way to address wide differentials in the short term is through temporary industry-wide production cuts.”

Other producers and refiners fiercely oppose the concept, saying the industry should not be inviting government interference in the free flow of energy.

They believe the situation will resolve itself as uneconomic oil will be shut in by companies and prices recalibrate. Producers have voluntarily announced about 140,000 barrels a day of combined output reductions.

Imperial Oil CEO Rich Kruger said all companies should live with the consequences of investment choices made over the decades.

“Government intervention with the objective to manipulate market prices would send a very negative signal to investors about doing business in Alberta and in Canada,” Kruger, head of the country’s largest refiner, said in an interview.

“Short-term market manipulation will not resolve the underlying structural issues. To me, it’s kind of like treating a patient with a major head injury with Aspirin, and hoping it solves the problem.

All of this gloomy talk is unfolding at a time when most producers are assembling their capital budgets for next year.

So far, announced spending plans have been mixed, although some companies are delaying the release of their capital programs due to the ongoing uncertainty.

In a report issued Monday, AltaCorp. Capital analyst Nick Lupick said he expects the larger explorers and producers to “err on the side of caution and conservatism” for 2019.

Tamarack Valley Energy CEO Brian Schmidt said the differential could lead to some deep cuts in capital for the industry next year if prices continue at current levels.

“If something doesn’t change, this is very serious,” said Schmidt, who opposes the idea of government-mandated output cuts.

“I laid off a rig here yesterday; these guys were ready to go to work — crews all lined up and now they’re laid off. Why are we talking about curtailment? Why don’t we talk about how to move product and get better prices.”

Players in the oilfield services sector are bracing for lower spending and activity from petroleum producers next year if the situation doesn’t improve.

The drilling sector, which has already seen 20 of its best drilling rigs leave the country in recent years, is watching cash flow levels for producers being squeezed, which will inevitably impact capital budgets if it continues for several more months. 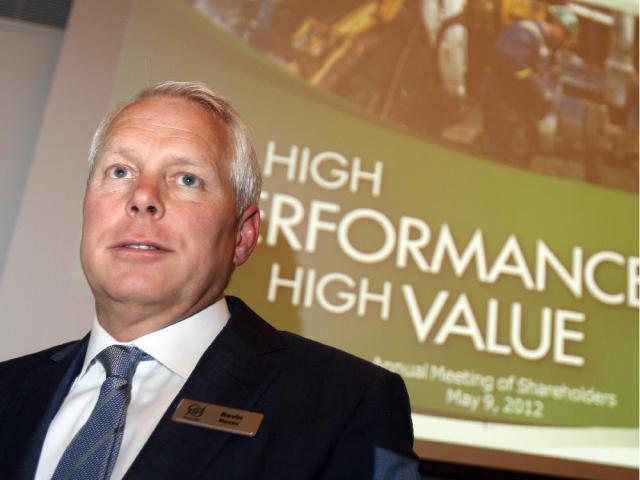 “There is a high degree of anxiety with my customers,” said Kevin Neveu, CEO of Precision Drilling, the country’s largest driller.

While oilpatch drillers are now focused on the traditionally busy winter drilling season, he believes the bigger question is whether spending tails off in the second half of next year. Meanwhile, Precision is seeing its activity in the U.S. up 30 per cent year over year.

“I have been in the business as a professional since 1982. I have never seen a wider divergence in sentiment than I do today between the U.S. and Canada,” Neveu added.

Earlier this month, the Petroleum Services Association of Canada (PSAC) forecast drilling in the country next year will dip by about five per cent to 6,600 wells, with overall spending dropping by about $1.5 billion to $1.8 billion.

Mark Scholz, president of the Canadian Association of Oilwell Drilling Contractors, notes the number of drilling rigs in Western Canada has fallen from about 850 five years ago before the price crash to 590 today.

A government-imposed curtailment on oil output would only make the situation worse, he warned.

“We unequivocally do not support that direction,” Scholz said. “If we shut down the winter drilling season, there will be collateral damage in the service industry, no question.”

As the battle royal over the curtailment question plays out, the Notley government is prodding Ottawa to take action and buy locomotives to help ramp up crude-by-rail shipments.

Notley said Monday she is appointing three envoys to consult with industry in the coming days about short- and mid-term solutions to shrink the oil price gap. She is also creating a unit in the premier’s office to prioritize more upgrading and refining within Alberta.

Investors are also watching the pipeline drama play out, with many sitting on the sidelines or heading for the exits. The S&P/TSX Capped Energy Index has dropped 24 per cent in the past six months alone.

“Until politicians show they are willing to get these things built, investors have just said we’ve had enough with Canadian energy until there is some political will to get some of this stuff done.”