David Milgaard could see I was a tad uneasy when he dropped by the Toronto Star newsroom unexpectedly in July 1993, dripping wet and half naked.

It was a year after he had been freed from prison — after spending nearly 23 years behind bars as the victim of one of Canada’s most notorious miscarriages of justice.

Milgaard, then 40, was wearing no shirt or shoes when he made his surprise visit to the Star’s newsroom to say hello and thank you for reporting on the case.

He was dripping rainwater on the newsroom floor and beaming.

Milgaard said he shed his shirt and shoes because he wanted to feel the sun and rain on his back and the pavement under his feet. He said he missed those things while behind bars.

Perhaps he needed to remind himself that he was finally free.

Milgaard died on Sunday of natural causes after a short illness. He was 69.

He was 40 when he showed up unannounced — shirtless and shoeless — at the Star. We had known each other for a couple of years then.

He appreciated that I seemed a bit uneasy talking to a semi-clad man and accepted a free Blue Jays souvenir T-shirt.

He also had a piece of pie and some juice and stared out at boats in the Toronto harbour. A passing canoe caught his eye, and he talked of relaxing in northern Manitoba, away from everything except his thoughts and nature and maybe a few friends.

At that point, Milgaard was already doing a little work with a social justice group based in Saskatoon that helped prisoners who claimed they are wrongfully convicted.

After leaving the Star, he shed the shirt again and went running down Yonge Street in the rain, his arms outstretched as if he was going to fly.

He smiled much easier that day than when I visited him in Stony Mountain Penitentiary in November 1991.

He almost walked away from that first interview, after I asked him why he didn’t just say he did the killing so that he could display the remorse necessary for him to be granted parole.

At that point, he appeared to have little hope of ever clearing his name.

He said he could never lie that he attacked Miller — even if a false confession meant his freedom.

“If someone asked you to admit to something and you didn’t do it and it’s really terrible, I’m sure you wouldn’t say you’re guilty,” he said. “Because you’re not.”

On top of the slashing scars on his arms were a couple of large rose tattoos, also from prison.

Milgaard was a skinny 16-year-old when he was arrested for the 1969 rape and knifepoint murder of Saskatoon nurse’s aide Gail Miller.

Milgaard grew from a teen to a middle-aged man in Canada’s roughest prisons, where he protested his innocence to anyone who’d listen.

He was raped, had his teeth punched out and often demanded to be put in solitary confinement just so that he could escape everything.

His arms became scarred with about a dozen slashes. They were about an inch long, ugly and deep. Some were from suicide attempts and others were just the slashing that’s common in prison, when prisoners choose pain over the dull feeling of being one of the living dead.

He said he hated it when strangers looked at him and he thought they saw him as a rapist and a killer.

“It was a nightmare,” Milgaard once said. “People do not have much love and care inside those walls.”

Milgaard’s conviction was overturned by the Supreme Court in 1992 and the Saskatchewan government stayed the charges.

Milgaard’s mother, Joyce, fought tirelessly with a team of lawyers, including David Asper and Hersh Wolsh of Winnipeg and James Lockyer of Toronto, to win his release from prison.

Lockyer, who helped found the organization Innocence Canada, confirmed the death after speaking with Milgaard’s sister on Sunday.

The Supreme Court of Canada threw out Milgaard’s conviction and he was finally exonerated in July 1997 after DNA tests proved that semen found at the crime scene didn’t match his.

Fisher was convicted in December 1999 of first-degree murder in Miller’s death and sentenced to life in prison.

The Saskatchewan government eventually issued Milgaard a formal apology and awarded him a $10-million compensation package.

Milgaard shared the money with his family because he said they suffered too. 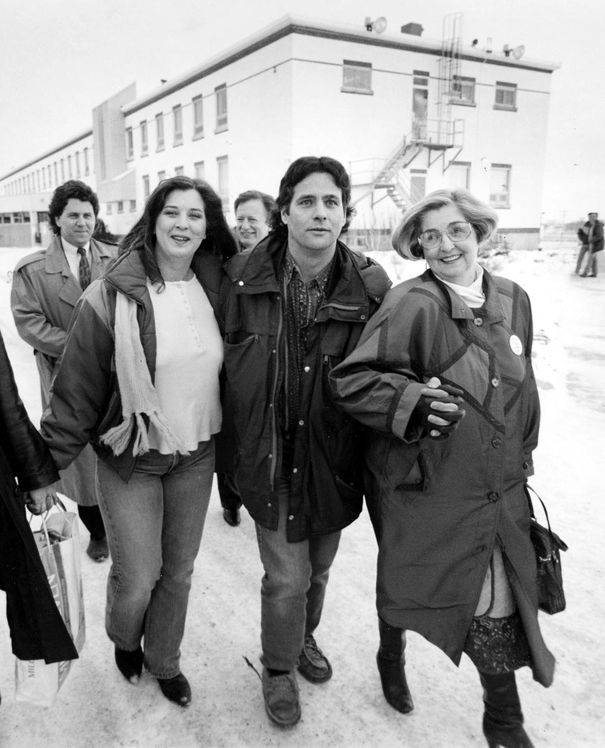 The compensation package allowed his older sister and brother to go back to school and his baby sister to buy a house and his father to finally retire, at age 69.

“My whole family, as far as I’m concerned, were in prison, just like I was,” he told the Star in 1993. “They deserve compensation.”

Milgaard hurt his parole chances by escaping twice — once, for two months in 1980, when he lived in Toronto selling encyclopedias.

He was shot during one escape attempt.

He also attempted escape through suicide.

At the time of his trial in 1970, the crown argued that Milgaard raped and knifed Miller to death in a purse-snatching gone wildly awry, after the youth from the prairie town of Langenburg, Sask., pulled into Saskatoon early one morning looking for a friend’s home.

Fisher was sentenced to 13 years in prison in December, 1971, after being convicted on two counts of rape in Winnipeg, and three counts of rape and one of indecent assault in Saskatoon.

By that time, Milgaard had already spent two years behind bars.

Nine years later, on Jan. 6, 1980, Larry Fisher was released on parole and living under the custody of his mother in North Battleford, Sask.

On March 31, 1980, Fisher was charged with the rape of his mother’s neighbour.

Milgaard constantly stressed that Fisher deserved a fair shake from the justice system that wrongfully convicted him.

There was a public inquiry into his wrongful conviction, beginning in January 2005.

In Milgaard’s later years, he helped to raise awareness about wrongful convictions and demanded action on the way Canadian courts review convictions.

“I think it’s important for everybody, not just lawyers, but for the public itself to be aware that wrongful convictions are taking place and that these people are sitting right now, behind bars and they’re trying to get out,” Milgaard said in 2015.

“The policies that are keeping them there need to be changed. The wrongful conviction review process is failing all of us miserably.”

After his release, he married a woman who had grown up in Saskatoon, once believing that Milgaard was a killer.

He had a special arrangement with his wife. When he needed to get away, he simply left, but let her know so that she didn’t worry.

With files from The Canadian Press

Peter Edwards is a Toronto-based reporter primarily covering crime for the Star. In 1999, he wrote a book with David Milgaard’s mother, Joyce, on her bond with her son and the fight to clear his name. Reach him via email: [email protected]

Anyone can read Conversations, but to contribute, you should be registered Torstar account holder. If you do not yet have a Torstar account, you can create one now (it is free)

Conversations are opinions of our readers and are subject to the Code of Conduct. The Star does not endorse these opinions.