There is much irony in the Alberta Teachers’ Association repeatedly hiring anti-oil-and-gas types to speak at its conventions.

First, they paid David Suzuki $50,000 to speak to teachers; now it’s Tzeporah Berman. She’s not exactly a household name in Canada, but well-known as an attacker of all things petroleum — even though, judging from her appearances at every energy hotspot with a rolling television camera, she uses more than her fair share of oil and gas, just like Suzuki.

One major irony, of course, is the reason why our teachers are the best paid in the country has everything to do with Alberta’s main economic driver — its world-class, ethical energy industry that sends billions of dollars in royalties into government coffers. Also, many employed in Alberta’s energy patch have traditionally received generous salaries, ensuring that billions of tax dollars get sent to Edmonton and Ottawa to pay for our cherished social programs.

As Herald columnist Don Braid has already pointed out, hiring a woman who advocates and believes in breaking the law to make a point sends the wrong message to teachers and students. Not exactly the message you want to impart to students when you’re telling them to follow the rules and don’t bully others.

The Notley government distanced itself from Berman Monday, saying in a written statement by the Premier’s director of communications, Cheryl Oates: We have been clear that when it comes to Alberta’s oilsands, Tzeporah Berman is dead wrong.”

Berman was once afforded greater credibility thanks to Notley appointing her to the Alberta NDP government’s Oil Sands Advisory Group in 2016, which Berman thankfully eventually resigned from.

But what’s most ironic of all is that Berman’s views align with many of Notley’s most high profile ministers, including Notley, whose views on oil and gas only recently changed once she became premier.

Consider Shannon Phillips, Alberta’s Minister of Environment and Parks and the Minister Responsible for the Climate Change Office. Phillips was involved in No Drilling Lethbridge and helped draft the Alberta Federation of Labour’s opposition to Enbridge’s Northern Gateway pipeline, which would have transported Alberta bitumen to tidewater at Kitimat, B.C. The cancellation of that pipeline by Prime Minister Justin Trudeau — despite it being approved through a costly, multi-year process and then passed by the House of Commons under Stephen Harper — was partly informed by the fact that some Albertans, like Phillips, were opposed to the pipeline.

Phillips also co-authored a book with Greenpeace mouthpiece Mike Hudema, entitled: An Action a Day Keeps Global Capitalism Away. Seriously. You can’t make this stuff up! In the 2004 book’s preface, Hudema wrote: “It would not have been possible to put this book together without her. She pushed me to write it, edited my work, and contributed to its content. I owe her a heavy debt.”

Phillips, in heavy damage control mode, says she just “moved some commas around.” Oh sure. No author says someone contributed to a book’s content if that didn’t occur.

Sadly, when it comes to Phillips, I could go on and on, but NDP ministers with even more important portfolios than hers have similar views.

Oates’ statement also said: “(Berman’s) upcoming speech has no bearing on the curriculum work being overseen by Minister (David) Eggen and he will continue to engage more reasonable experts on various subject areas while working to finalize the K-4 curriculum by the end of the year.”

Here’s hoping Notley’s office is right. One YouTube video shows Eggen, then the executive director of the Friends of Medicare, opposing “new approvals” of projects in Alberta’s oilsands.

“There’s plenty of responsible, good Albertans that do oppose new approvals for the tarsands,” he said, going on to lead a sparse crowd on the legislature steps in a chant of “No new approvals.”

In another YouTube video, Eggen called the oilsands “a catastrophe” that is “poisoning the land, poisoning the water and killing the people.” This fella is in charge of the curriculum in Alberta? A good chunk of the billions spent on Alberta education comes from the oil patch and he’s claiming that it’s killing people rather than helping to educate them and heal them in our oil-fuelled healthcare system. It’s alarming. 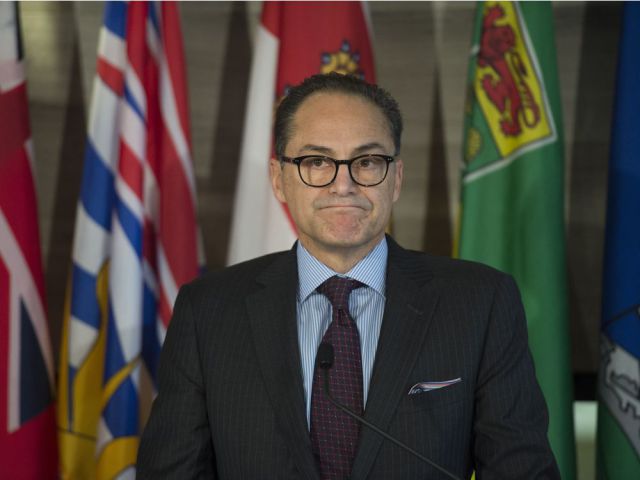 Alberta’s Finance Minister, Joe Ceci, has been quoted as slamming the oilsands in a Maclean’s article from Dec. 29, 2008.

“We should be able to say to Calgarians that we’re investing in things that are contributing to a positive world,” said Ceci, then a long-time Calgary alderman. “If environmental factors on some of the companies out there are less than sustainable, then we should not be investing in those areas.”

Brian Mason, the ND’s former leader and now Minister of Transportation, was quoted in a 2013 newpaper, saying: “The oilsands has given Alberta and Canada a black eye with the rest of the world.”

Then, of course, there’s Premier Notley, so desperate to hang on to power that she has suddenly seen the light, when it come to oilsands development. From previously speaking out against the oilsands in general, she also opposed and spoke against the building of the Keystone XL pipeline and the Northern Gateway pipeline.

But, now she wants to spend billions of Alberta tax dollars on the 60-year-old Kinder Morgan Trans Mountain pipeline that Trudeau’s federal Liberal government purchased for $4.5 billion. The twinning of the existing pipeline might have been built by the private sector had all the unrealistic, anti-oil types like Notley and her cabinet ministers been onside with the project, rather than protest Alberta oil and gas at every turn for many years.

With friends like those in the Alberta NDP cabinet, who needs enemies? The enemies to Alberta’s energy industry are running Alberta’s government. That’s the biggest irony of all.