From the lack of available pipeline capacity to the potential adoption of electric cars, there is no shortage of threats facing the Canadian oilsands. But the latest menace lies in a seemingly innocuous and highly common element: sulphur.

Long a byproduct of the heavy oil industry, sulphur is so common that it’s become a part of the general landscape at mining sites such as Syncrude Canada Ltd.’s Mildred Lake facility (now majority owned by Suncor Energy Inc.), where massive blocks of sulphur byproduct are stacked several storeys high, kind of like a yellow-stained low-rise apartment complex.

Global regulators are trying to stem sulphur-dioxide emissions, which will potentially shrink the market for heavy crude, but new marine regulations targeting the sulphur content used in shipping fuel could soon force Canadian oilsands companies to stomach an even steeper discount.

“This is a very straightforward issue,” said Allan Fogwill, president of the Canadian Energy Research Institute (CERI). “What we’re facing is a devaluation of oilsands assets in the marketplace.”

Fogwill and the industry’s concern is a result of new International Maritime Organization (IMO) regulations that aim to dramatically lower sulphur content levels in bunker fuels that propel marine vessels to 0.5 per cent from 3.5 per cent. The changes come into effect January 2020.

The new regulations could force more oil companies to strip higher volumes of crude out of their product, adding more cost to an already capital-intensive process. In the absence of new technologies that would further refine Canadian crude domestically, analysts say exporters may face a widening discount for their product.

CERI released a report at the end of July that found as many as 574,000 barrels per day of oilsands production, or roughly 20 per cent of unconventional oil projects, would not be economic under a scenario where sulphur levels are lowered to the new IMO standards. 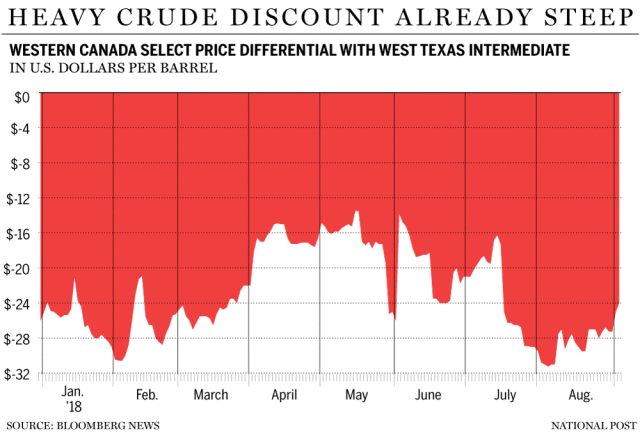 The report estimated the discount for Western Canada Select (WCS) compared with West Texas Intermediate (WTI), an international benchmark, could widen to as much as US$33 per barrel by 2025, compared to a recent average discount of around US$15 per barrel.

The additional discount would only intensify a pricing gap that has plagued the oilsands industry because of its inability in recent years to build major pipeline projects such as Enbridge Inc.’s Northern Gateway and TransCanada Corp.’s Keystone XL.

But Canadian operators are in a bit of a bind. The bitumen lodged deep beneath northern Alberta is one of the most sulphurous oil resources on the planet. High sulphur concentrations give bitumen its nasty-sounding “heavy sour” title, in contrast to the “light sweet” crude produced in, say, the U.S. Midwest.

The result could be that more companies will try to strip sulphur out of their product, turning sour crude sweet. But that process isn’t cheap.

“It’s a big part of what our upgrading process does,” said Will Gibson, a spokesperson for Syncrude, which is among the Canadian operations that produce a lighter “synthetic” crude.

The end product from that process is significantly different than its sour counterparts. Syncrude Sweet Premium oil was selling for around US$64 per barrel Thursday, compared to roughly US$37 for WCS, a heavy blend.

For every barrel of bitumen treated in upgraders, about half is separated out to make diesel and gasoline, while the other “heavy” half is used to make thicker, cheaper products such as bunker fuel and fuel oil. Meanwhile, diesel or gasoline product might account for 80 per cent of every barrel of lighter crudes.

Separating that heavier portion of the oil barrel, or stripping away the remaining sulphur and other detritus, requires an intense amount of energy, which raises both costs and emissions for producers.

For refiners, installing coker units on site to remove sulphur can cost anywhere between US$800 million and US$2 billion, said Jihad Traya, a consultant at global firm HSB Solomon Associates LLC. That cost is steep, especially since refiners remain unsure how big the discount on heavy crude will be after 2020.

Canadian firms already upgrade about 1.1 million barrels per day domestically into synthetic crudes, or roughly half the oilsands’ total production. The other heavier crudes are refined at foreign facilities, almost exclusively in the U.S.

Very few Canadian companies that depend on U.S. coker units to upgrade their product have begun investing in new technologies to reduce sulphur concentrations, Traya said.

Large integrated firms such as Royal Dutch Shell PLC or Suncor and Canadian Natural Resources Ltd. are fairly well prepared to absorb the IMO’s changes. But smaller companies focused on upstream production have instead opted to either accept the discount, or hope that more foreign refiners will make the investments themselves.

“They hope that someone else will take the risk,” Traya said.

They hope someone else will take the risk

But the push to reduce sulphur content levels — and by extension, sulphur-dioxide emissions — is unlikely to go away.

“There’s nowhere to go but down with sulphur,” said Neil Camarta, founder of Calgary-based Field Upgrading Ltd., which is developing a technology to strip sulphur out of heavy oil at a low cost.

Field Upgrading currently operates a micro facility that churns out 10 bpd of low-sulphur product, with plans to expand that amount to 2,500 bpd. The company is currently seeking financing for the expansion. Camarta said the pilot project was built with the explicit intention of meeting lower thresholds for sulphur contents in marine fuels.

“I think this (issue) will come back to haunt the oilsands around 2020,” he said.

An appetite for lower sulphur emissions will become especially prominent as sulphur levels in crude resources continue to rise around the globe. The Paris-based International Energy Agency has repeatedly warned that sulphur levels are reaching higher and higher levels as producers use up the lightest and easiest-to-access crudes.

That trend has regulators focusing on downstream consumers. According to the IMO, marine vessels are responsible for around 13 per cent of sulphur-dioxide emissions under current fuel standards. The latest tightening could dramatically reduce that level, as long as shippers comply with the international standards.

Daan van Wieringen, a researcher at Netherlands-based Tauw Group, said sulphur-dioxide levels in some European bitumen sources are higher than commonly realized. He studied various European bitumen blends as part of a white paper in which he argued for tighter sulphur regulations.

“The concentration of H2S (hydrogen sulphide) is sometimes so high that there is an immediate danger to life and health,” Wieringen said.

Sulphur-dioxide emissions can cause respiratory ailments, according to the World Health Organization and others, and can even be deadly in high concentrations.

There is neither a clear consensus about how much the IMO regulations will cost producers, nor how much of that cost will specifically be shouldered by upstream companies.

We don’t think this will be a permanent thing

“There will be a discount applied to higher sulphur products to the refiner that will be passed along to upstream barrels,” said Nicholas Lupick, an analyst at AltaCorp Capital Inc. in Calgary. “But what’s yet to be determined is the exact cost. To say that increased cost will be borne 100 per cent by one piece of the supply chain simply isn’t true.”

Part of the challenge in forecasting the potential impact is uncertainty over whether shippers will simply opt to install scrubbers that effectively clean a ship’s exhaust before letting it out. The technology would allow shippers to continue burning higher sulphur-content fuels.

Companies such as Norway’s Frontline Ltd. and Miami-based cruise-ship operator Carnival Corp. have already opted to install scrubbers in their fleets.

In the absence of that, refiners that want to accept a more sulphur-heavy feedstock will have to install coker units to strip away excess sulphur. 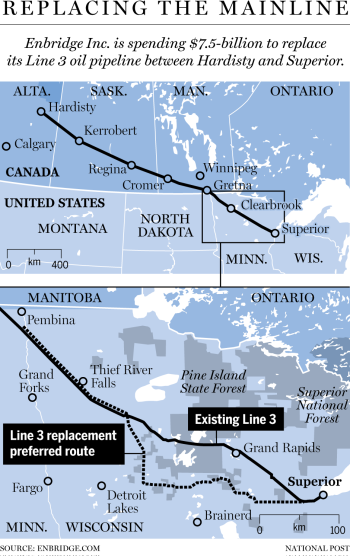 Either way, the impact on the oil market could be temporary. IHS Markit analyst Kevin Birn said a steep discount for sulphurous crude would only spur refiners to more quickly recalibrate their facilities and take on heavier blends, which, in turn, would mop up any excess supply.

“We don’t think this will be a permanent thing,” he said.

There is also growing demand for the petroleum coke — another product of the cheapest and heaviest portion of the barrel — in India to fuel its numerous power facilities, which could help offset any waning demand in heavier marine fuels.

CERI’s Fogwill said the technology required to decrease sulphur levels is already available, but requires potentially steep investments at a time when major oilsands players are more focused on delivering cash to their remaining shareholders.

But some companies may simply have to accept a discount and hope new pipelines ease their market woes.

“It’s not like they don’t have options,” Fogwill said. “But as with anything, these options will cost money.”