CALGARY — Rising oil prices will provide much-needed relief to balance sheets in both the private and public sector in Alberta, but even skyrocketing crude won’t rescue the province’s budget problems or direct investment in the province.

Crude oil prices have climbed steadily since Nov. 2020 and are now trading in a range that will lift the Canadian dollar, help alleviate some of the strain on Alberta’s budget and allow the country’s largest oil producers to generate additional billions in cash this year.

Earlier this month, Brent crude briefly hit US$70 per barrel, and Bank of America has suggested the benchmark could breach the US$100 per barrel milestone once again amid rising global demand.

West Texas Intermediate benchmark oil price traded down 1.6 per cent Tuesday to US$64 per barrel, which is still roughly double the North American benchmark’s price from last summer. Similarly, the Western Canadian Select benchmark for domestic heavy oil blends fell 58 U.S. cents per barrel Tuesday, or 1 per cent, to trade at US$52.81 per barrel — slightly off its 52-week high of US$54.74 per barrel reached last week.

Higher oil revenues as well as the availability of COVID-19 vaccines and stimulus spending in the U.S. lead to a “stronger and more secure outlook” in Canada and point toward strength in the Canadian dollar, Deutsche Bank commodities and foreign exchange strategist Michael Hsueh said in a Monday research note.

Alberta, Canada’s largest oil producing province, has budgeted for the year under the assumption of much lower oil prices, so higher oil prices could buoy the province’s financial situation. The budget assumes the WTI benchmark would average US$46 per barrel and WCS blends would average $40.70 per barrel, resulting in an $18.2-billion deficit.

But even in Alberta government’s high oil price scenario of US$55.50 per barrel this year rising to US$64.50 per barrel in 2023/2024, the province is still looking at a $3.4-billion budget deficit at the end of its forecast period in 2023, which University of Calgary economist Trevor Tombe said is an indication that there are structural problems in the budget as Alberta is relying on a quarter of the budget’s revenues to come from resource royalties.

“A $1 change has an impact on the overall budget balance of $230 million and that includes more than just the resource royalties themselves. It also includes the other implications of an oil price change on corporate incomes taxes and other revenue items as well,” Tombe said.

However, the relationship between oil prices and the Alberta government’s revenues do not move in a straight line.

“A $10 change is not ten-times a $1 change,” Tombe said, because large upswings in oil prices trigger events like major oilsands projects repaying their capital costs earlier than expected, which in turn leads to incrementally higher revenues. 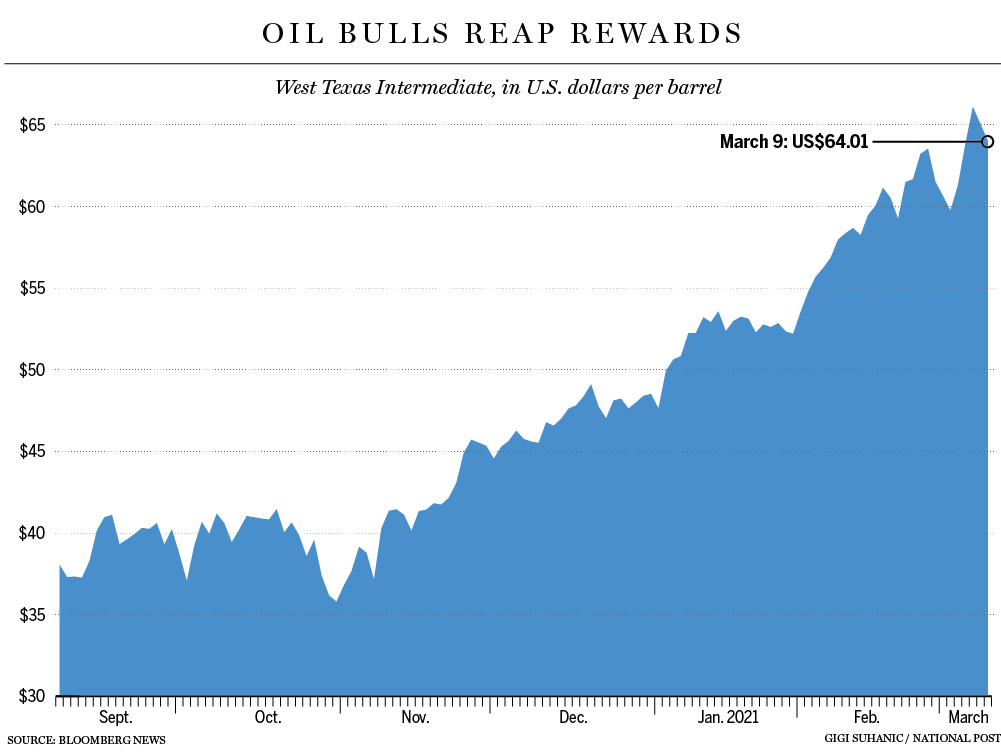 St-Arnaud said he doesn’t expect the recent uptick in oil prices will necessarily lead companies to drill new wells or greenlight new projects this year because many have promised capital discipline and have pledged to pay down debt that had piled up during the depths of the 2020 oil price crash and COVID-19 outbreak.

“With oil where it is right now and what we’ve seen over the past few months, the very, extremely negative scenario that most were contemplating last summer when oil prices were US$30 per barrel isn’t happening, but it doesn’t mean that oil companies will start to rehire quickly,” St-Arnaud said.

“I think a lot of them have taken on a lot of debt last year to keep operations going. So they’re probably going to move at the moment to, ‘Let’s repay, let’s repair our balance sheet to put ourselves in a better position in the future,’” he said.

“After a brutal first half last year, the resource sector has seen output surge at a 24 per cent annualized clip in the past six months. And with oil now north of US$60, we expect Alberta to lead the nation with 6.5 per cent GDP growth this year, and that may well be a cautious call,” wrote Douglas Porter, chief economist at BMO Capital Markets said in a note earlier this month.

The province’s three largest oil producers Canadian Natural Resources Ltd., Suncor Energy Inc. and Cenovus Energy Inc. have said their priority this year would be focused on paying down debt and paying shareholders rather than drilling or building new facilities to grow production.

Suncor president and CEO Mark Little said on his company’s fourth quarter conference call on Feb. 4 that his company would not ramp up spending this year in response to oil prices. “I can assure you that we will not increase our 2021 capital guidance above our current range,” Little said, and repeated it on the call for effect.

Suncor said it would repay between $1 billion and $1.5 billion in debt this year, while Canadian Natural has implemented a new debt target of $15 billion compared with current long-term debt of $20 billion and has said it could reach its goal this year.

At current oil prices, analysts believe all three producers could generate billions in additional cash flow this year after expenses.

Stifel FirstEnergy analyst Robert Fitzmartyn pegged CNRL’s free cash flow potential this year at $7.8 billion in a March 4 research note, which he called a “leading” position in the industry.

Despite expectations for higher cash flow this year, most forecasts show spending levels in the oilpatch will not rise sharply from 2020.

Spending is expected to be well below 2019 levels, when producers spent $25.8 billion in conventional oil and gas and $9.3 billion in the oilsands, according to the institute.