On his first day as president, Joe Biden pulled the pin on Keystone XL.

The political fallout reverberated on both sides of the border, as pipeline opponents set their sights on other infrastructure that transports Canadian oil into the United States, such as Enbridge’s Line 3 replacement project.

“It should set a precedent,” said Anthony Swift of the Natural Resources Defense Council (NRDC). “The same case that Keystone XL failed to pass, Line 3 certainly fails to pass as well.”

Hours after his inauguration, the 46th U.S. president

, a cross-border oil pipeline that has been under construction since last year — and one Biden has long promised to block over climate considerations.

. The decision will lead to thousands of workers losing their jobs.

It didn’t say so officially, but the project will likely end up in the graveyard of unsuccessful pipeline proposals, joining Energy East and Northern Gateway.

But the broader question needs to be considered: Will the decision have ramifications for other pipelines required to move Canadian oil and natural gas to the country’s largest customer?

“It does set a precedent because this has not been done before . . . something of this scale and this kind of ping-pong approval process and challenge,” Canadian Energy Pipeline Association CEO Chris Bloomer said in an interview.

“It is a risk and a worry because there is relentless opposition that can muster a lot of traction.”

If the American administration won’t sit down and have further dialogue about the pipeline, Kenney said Prime Minister Justin Trudeau should impose “

The premier reiterated his concerns a retroactive cancellation of the KXL permit that was signed off by former president Donald Trump will set a precedent that could be imposed on other pipelines.

“There are people now working in the White House who I believe may very well counsel the president to use on other pipelines the power that he used today,” said Kenney, whose government has invested $1.5 billion in Keystone XL.

Canada exported about 3.4 million barrels per day (bpd) to the United States in October and is the largest international supplier of oil to the country. Keystone XL was designed to ship 830,000 bpd southward, connecting the oilsands in Canada — with the world’s third-largest proven oil reserves — to the massive refining hub along the U.S. Gulf Coast.

The decision to block it came as the Canadian energy sector was finally making progress on building pipelines to unclog bottlenecks in the oil-transportation system and improve returns for petroleum producers.

Aside from work on Keystone, construction has also been underway on the Trans Mountain expansion and Enbridge’s Line 3 replacement project.

“It is a loss, it is problematic and it is significant, but there are alternatives,” said Tristan Goodman, president of the Explorers and Producers Association of Canada.

Killing Keystone XL was always going to be a highly political decision, given Biden’s campaign promise to cancel the presidential permit.

But it also highlights how vulnerable Canada remains with one major customer for its oil.

“The real issue Canada has to think about is just how durable is our long-standing, trustworthy economic partnership with the United States?” said Hal Kvisle, the former CEO of TransCanada Corp. (now TC Energy) when Keystone XL was first proposed in 2008.

With the development sidelined, attention turns to other pipelines, including Enbridge’s Line 3 project and its existing Line 5 pipeline, which has encountered political opposition in Michigan.

“They are in more trouble than they were yesterday, that’s for sure,” said Keith Stewart, senior energy strategist with Greenpeace Canada.

However, there are key differences.

While Keystone XL was a proposed development, the other projects are operating pipelines. Any changes to those lines would directly affect consumers, not just producers.

Line 3 will replace the older pipe in the ground and ship an additional 370,000 barrels per day (bpd) of oil out of Western Canada to Superior, Wis., once it’s completed in the fourth quarter of 2021.

Enbridge’s Line 5 transports oil to refineries in Central Canada through Michigan. The governor gave notice in November that the state intends to revoke a six-decade-old easement that allows the pipeline to cross the Straits of Mackinac, while Enbridge disputes its authority to do so.

The industry is also concerned that Wednesday’s decision will create more uncertainty for new projects.

“Just because you have an approval doesn’t mean you have approval — it’s bizarre,” Bloomer said.

All of this puts more pressure on the Trudeau government to get the Trans Mountain project built. 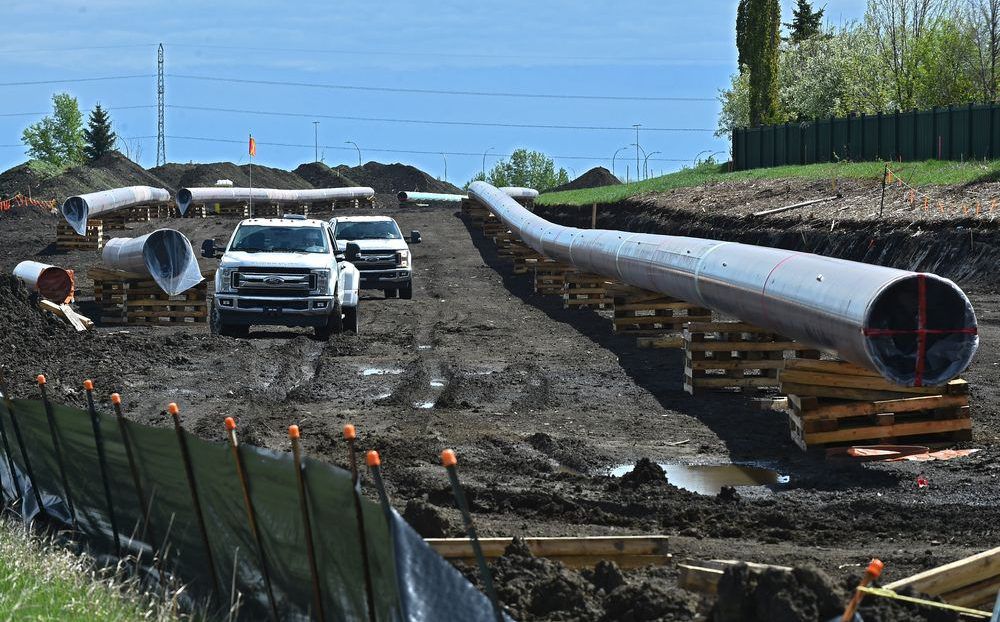 The pipeline to the B.C. coast from Alberta is one development that remains within the country’s control, and it will allow for increased exports to customers in Asia.

What will Ottawa do next?

In an interview, Natural Resources Minister Seamus O’Regan noted Biden had made a clear campaign commitment on Keystone XL, but acknowledged he was “brutally disappointed we didn’t get the opportunity to make the case” for the project.

Asked if the decision increases the risk to other pipelines, O’Regan stressed the new U.S. administration is filled with pragmatic and “entirely predictable people.”

“We are their biggest supplier, they are also our bigger customer. So managing this relationship and getting it right is vital not just to us, it’s vital to them as well.”

It is vital, but the need for political symbolism was more important than the future of Keystone XL to the new president.

“On one hand, I’d argue Keystone XL will come back at some point because it just makes perfect sense,” Kvisle added.

“The other argument is that Canada should give up on it, and Canada really ought to think about diversifying our market.”