So does Coun. Druh Farrell.

Just in case Calgary businesses haven’t heard, the property tax shift coming in 2019 — caused by the eroding value of those shiny downtown office buildings — is a five-alarm financial fire.

The solutions, however, remain elusive, even after a lengthy meeting by a city committee Tuesday delving into the issue of the shifting tax burden onto businesses operating outside the core.

But the scale of the issue is now apparent to everyone.

“It’s tough for people to watch when they see their bills going up. It’s putting businesses at risk and the answer coming back from the city is we don’t know what to do.”

In a series of charts in a detailed 69-page report, city administration paints a bleak picture of what’s happening with the value of downtown office buildings in the wake of the recession and oil price crash.

Since 2015, a glut of vacant office towers, a lack of tenants and declining sale prices on these buildings have created a revenue hole for the city, and a headache for businesses outside the core shouldering more of the tax burden.

In one succinct snapshot, the report notes 142 non-residential tax accounts saw a collective $12.6-billion evaporation in their assessed values between 2015 and this year.

In turn, this created a $193-million tax gap that has been spread to other non-residential property owners across the city.

“This was not a collapse of our commercial sector. This was a very specific number of buildings in our city that (took) a hit based on the loss of approximately 35,000 employees in our downtown,” city manager Jeff Fielding told the priorities and finance committee.

“That’s how specific it is. And that’s why it’s so difficult to fix.” 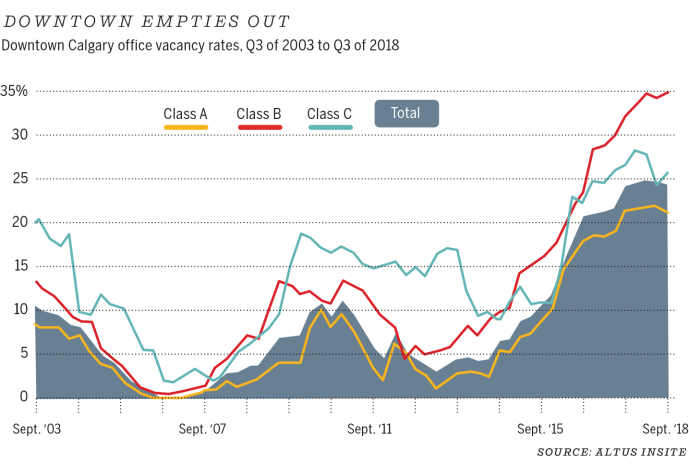 The tax shift will cause more grief for businesses outside the core in 2019, as non-residential properties pick up more of the slack as part of the annual revenue-neutral property tax reassessment system.

The city still needs the $193 million, and non-residential property owners are on the hook for it.

In the past two years, council used money from its reserve funds — about $45 million annually — to limit tax increases on local businesses to five per cent.