Buy production — or drill for it?

While Black Friday sales haven’t arrived quite yet, the idea of Canadian petroleum producers shopping for additional output — instead of spending money to explore for it — has become a growing question for the sector.

As the industry wraps up reporting impressive third-quarter results, highlighted by rising commodity prices and surging profits, two announcements this week could provide some answers on what to expect from the oilpatch in 2022.

Canadian Natural Resources, which recorded a $2.2-billion profit in the third quarter, announced Wednesday the friendly takeover of junior gas producer Storm Resources for $960 million, including the assumption of debt.

On the same day, the Petroleum Services Association of Canada released its drilling forecast for next year, projecting 5,400 oil and gas wells will be completed across the country in 2022. 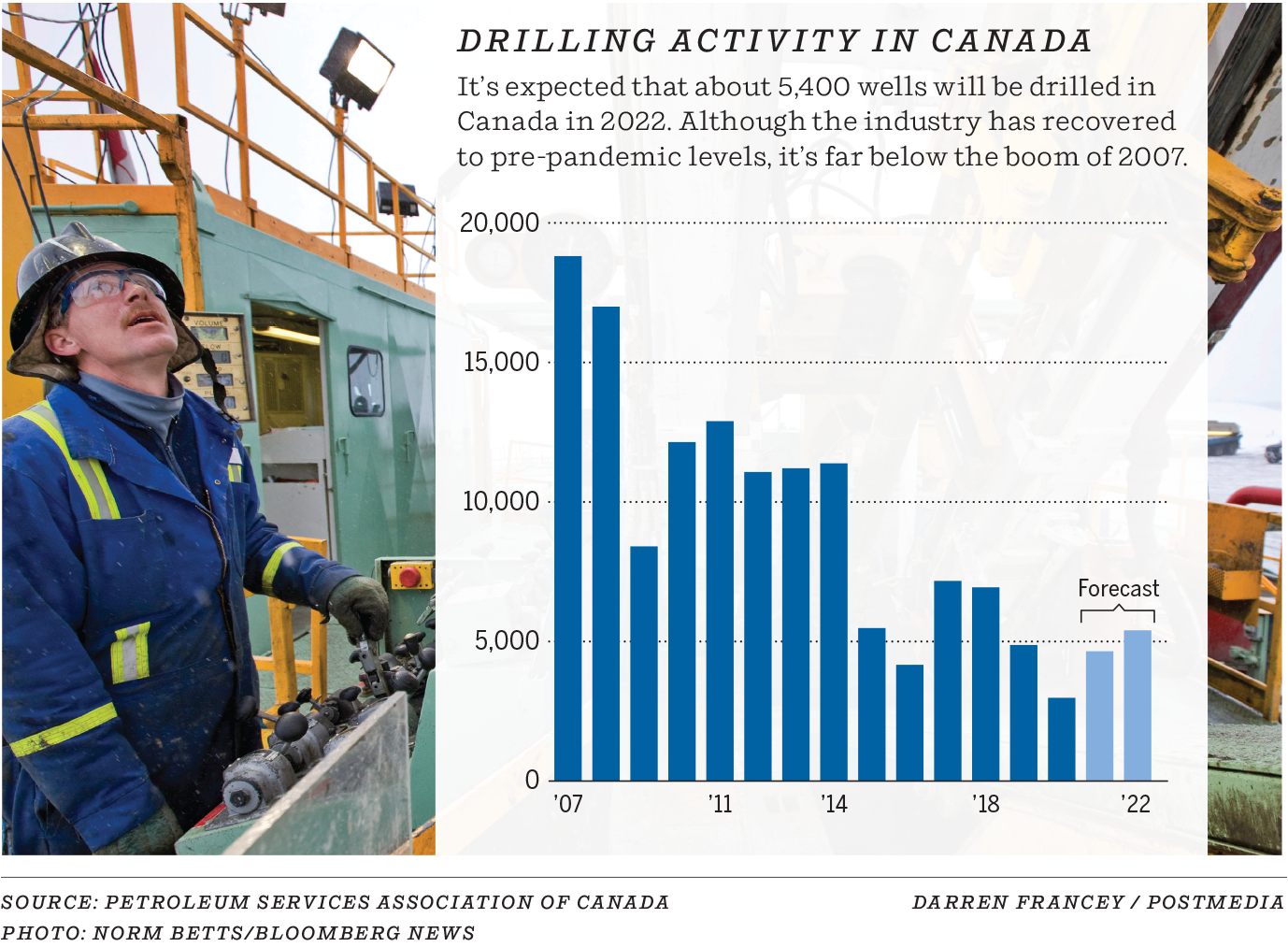 “Companies that have the capital to go and backfill (production), that have the size to make acquisitions, are doing so, recognizing the value that some of these smaller names trade at today,” analyst Jeremy McCrea of Raymond James said Wednesday.

“The mentality is it’s probably better to acquire, as opposed to go out and drill.”

Storm, which produces about 27,500 barrels of oil equivalent (boe) per day, accepted a cash offer from Canadian Natural of $6.28 per share, representing an all-time high for the junior producer.

The Calgary-based company, which began operating 11 years ago, focuses on producing gas in the Montney formation in northeastern British Columbia.

“It represents a big premium, especially when you look at the share price a year or 18 months ago,” Storm CEO Brian Lavergne said in an interview.

“We didn’t have a debt issue, there was no outside force that compelled us to do something. It’s more just the attractiveness of an all-cash offer, and that gives shareholders options.”

Storm’s share price, which hovered around $6 in September 2014, tumbled to $1 during the depths of the pandemic in March 2020, but it has rebounded by almost 200 per cent this year.

While the S&P/TSX Capped Energy Index has risen sharply since August, it’s up only 14 per cent since the start of 2020.

During the same period, benchmark U.S. oil prices have climbed by 29 per cent, closing Thursday at US$81.59 a barrel.

Many producers are rapidly paying down debt, buying back shares and hiking dividends, but haven’t dramatically increased spending. However, they are able to acquire companies that operate in the same areas and find efficiencies.

“At this time, investors want return of cash. I do think acquisitions will be something that (Canadian Natural) and others will look to as a way to grow,” said analyst Phil Skolnick of Eight Capital.

ARC Energy Research Institute expects the industry will generate $89 billion in after-tax cash flow this year, but will only reinvest $34 billion.

“Companies are doing quite well and there may be a modest increase in (drilling) activity. However, we are not expecting a big change because of the other demands for capital,” said institute executive director Jackie Forrest.

“Shareholders are not rewarding them for increasing production.”

Canadian Natural pumped out 1.24 million boe per day in the third quarter — up eight per cent from the April to June period — and increased its quarterly dividend by 25 per cent.

Asked if there’s future production growth coming in the industry next year, Canadian Natural president Tim McKay said the company is still working on its 2022 budget.

A handful of junior and mid-sized producers have recently increased their capital programs for 2022, with some accelerating drilling plans into the fourth quarter that were previously planned for next year.

Kelt Exploration released third-quarter results Wednesday and bumped up its capital program this year by about $20 million to about $195 million. It announced a $205-million budget for next year and said it will reassess its spending in the first quarter.

Earlier this week, Vermilion Energy increased its capital program this year by $75 million to $375 million, in part to boost spending for condensate-rich gas drilling in Alberta and for light oil drilling in Saskatchewan.

The company anticipates its 2022 budget will be between $400 million and $450 million, although a formal program won’t be released until next month.

According to the Petroleum Services Association of Canada (PSAC), the entire industry will drill 4,650 wells this year and then increase that number by another 750 wells in 2022.

While it represents a double-digit jump in drilling work, it’s not the kind of rapid growth seen during previous upturns in oil and gas prices.

“Customers are still not deviating away from what their original plans were,” said PSAC president Gurpreet Lail.

“We are not seeing that trickle down into activity.”

Labour shortages are another factor that will limit how quickly the oilfield services sector can grow in 2022, she added.

At Storm, Lavergne said the sector has been on a roller-coaster for several years, noting Alberta natural gas prices were marooned around $2 per gigajoule in 2018 and 2019 and have only recently taken off.

“Last year feels like a distant memory now, but it was only . . . 18 months ago that everything was an exercise at survival. Now we are at the opposite end of the spectrum, where we have a lot of cash flow and can’t invest it fast enough,” he said.

“It takes time to build confidence, to build up activity. People want it to happen right away, but it just doesn’t work that way.”

Previous : Cuda Oil and Gas Inc. Announces Resignation of Board Members
Next : Disconnect between COP26 and our energy reality