What’s in a corporate name?

Plenty, as TransCanada Corp. found out this week, announcing it intends to adopt the name TC Energy later this year.

The decision, which must still be approved by shareholders, sparked a flurry of questions and some consternation in the energy sector and the city.

Some industry players believe the move speaks to the continuing hemorrhaging of investment out of the country, and the difficulty for firms such as TransCanada and Enbridge to build new energy infrastructure at home.

Others worry it could be a precursor to the company relocating its head office out of the city as it erases Canada from its corporate label.

More likely, it simply means the energy giant wants a new brand as it continues to expand south of the 49th parallel.

“You could read it either way. Either the glass is half full or half empty,” said former Alberta energy minister Ted Morton.

“A name change like that does open the door. It removes the Canadian identity from the company . . . I don’t think you move to Houston if your name is TransCanada pipelines. But if your name is TC Energy, then it is easier.”

Analyst Jennifer Rowland with Edwards Jones in St. Louis said dropping the word Canada is deliberate, as investor sentiment toward the country’s oil and gas has soured due to problems building pipelines, and the infighting between provinces over energy developments.

But does this change mean Canada will be de-emphasized in the years ahead, or that the head office will eventually be relocated to Texas?

Kvisle, who retired in 2010, recalls TransCanada considered the idea of changing names a decade ago as it began to grow in the United States through the purchases of Gas Transmission NorthWest Corp. and ANR Pipeline Co., and by building the Keystone oil pipeline.

A new name reflects the company’s major growth in Mexico and the United States this decade, punctuated by the US$13-billion acquisition of the Columbia Pipeline Group in 2016.

Yet, the new handle doesn’t mean TC Energy will eventually shift its executives and head office out of the country, Kvisle said.

“I don’t think so. It simply reflects the wider spread of the company’s activities,” he said.

“Given the large pool of people in Calgary that are capable of executing what TransCanada wants to do, I would not see much interest on the company’s part in moving to the U.S.”

TransCanada was forged in the 1950s amid a fierce national debate about building a cross-country pipeline to move western Canadian gas to consumers in Central and Eastern Canada.

Today, TransCanada is a North American powerhouse with assets across the continent, from gas and liquids pipelines to interests in electricity generation.

About 52 per cent of the company’s earnings before interest, taxes, depreciation and amortization were expected to flow last year from the United States, compared with 40 per cent in Canada.

As for the new name, company spokesman Grady Semmens said the “TC” harkens back to the company’s Canadian roots.

“We continue and plan to remain a Canadian-based corporation headquartered in Calgary,” he said.

Such talk won’t stop the speculation, however, given the obstacles surrounding the construction of new energy infrastructure in Canada and the flow of energy investment into the U.S.

The decision by Encana, another company created with a name to reflect its Canadian heritage, to acquire Texas-based Newfield Exploration Co. last year has sparked similar questions about its future in this city.

Encana CEO Doug Suttles now works out of an office in Denver. He said last year the company would have a “headquarter-less model,” with locations in Calgary, Denver and Houston. 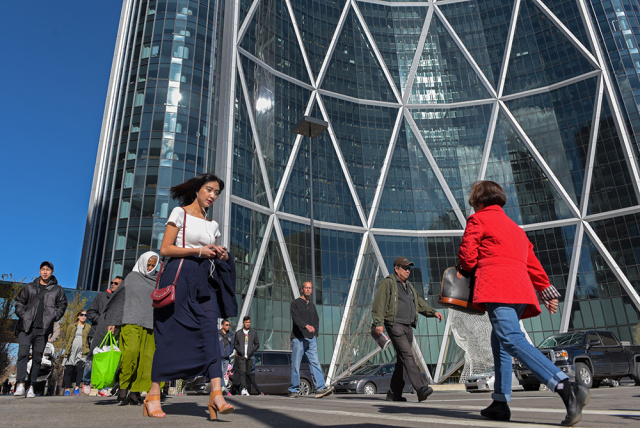 The Bow Tower in downtown Calgary, headquarters of Encana and Cenovus.

“When you have the vast majority of your investment somewhere else — in the U.S. in this case — and where the CEO and board is located . . . you have no longer a Canadian company,” former Encana CEO and founder Gwyn Morgan said in an interview.

The idea of relocating a corporate head office to another country is a sensitive one, because of the potential ramifications.

Former TransCanada chairman Dick Haskayne has long been concerned about what the loss of a major head office would mean for the country.

To be clear, Haskayne doesn’t think TransCanada is moving south.

But he believes the broader issues of capital flows and companies leaving the country are critical for the sector. Haskayne said the country must identify business areas where it has natural advantages and can succeed globally, such as in oil and gas.

“The head office is important. That’s where the decisions are made . . . as a head office town, you need all of the other support systems, the consulting firms, the banks,” he said.

“We have to pick things we are good at, and this is a huge natural resources country.”

Underlying the debate is the industry’s ability to successfully build additional energy infrastructure and expand production.

Battles continue to be fought over the Trans Mountain expansion and, as seen this week, over B.C. Coastal GasLink, a subsidiary of TransCanada. The effect of the federal government’s proposed Bill C-69 on building new pipelines has also ignited industry worries.

“When we make it easier for our homegrown companies to invest outside the country than inside the country, it’s part of this bigger problem we have today,” said Kvisle.

However, he worries the entire industry is facing more obstacles, becoming more uncompetitive due to government policies, and executives are reacting by shifting to where more opportunities exist.

“I don’t think TransCanada changing its name will change anything in Calgary one way or the other, but what has changed everything is the fact the upstream industry can’t get their product out,” he said.

“There is no real growth in Canada and there’s lot of growth in the United States. That means that’s where you build and invest.”

Previous : Heavy crude differential tightens again
Next : ‘We felt we needed to stand up’: Flames give an assist to pro-energy movement