Now there are suggestions Canadians, through the federal government, should consider investing in rail cars and locomotives to get oil to market.

The whole situation would be laughable, if it wasn’t so pitiful.

Here we are, in one of the richest oil-producing countries in the world, facing a massive price discount on Canadian crude as a transportation bottleneck causes pain for petroleum producers, as well as provincial and federal coffers.

And the solution, apparently, is more government investment.

After meeting with industry leaders in Calgary on Monday, Premier Rachel Notley said she wants the Trudeau government to consider making an investment that would increase the number of locomotives and rail cars capable of transporting oil out of the province.

The meeting comes as the price differential on Western Canadian Select (WCS) heavy oil is stuck around US$42 a barrel, and the sale has spread to light oil prices in Alberta, as well.

With Canadian crude heavily discounted, the Alberta government now pegs the estimated loss to producers, governments and the Canadian economy at $84 million a day — or $30 billion a year.

Desperate times call for desperate measures, such as asking Ottawa to consider investing in the railway business to get more oil moving.

It’s not a terrible request.

In fact, it appears to be one of the few options on the table to shrink the punishing price differential between WCS and benchmark West Texas Intermediate crude.

But just like Ottawa’s decision to buy the Trans Mountain pipeline this spring, it’s terrible the oil transportation situation has come to this woeful state.

“One of the things we can do in the short to medium term is increase rail capacity. I think there is a role for the federal government to play in that effort,” the premier told reporters.

“We need more cars. We need to order more locomotives in order to get more cars onto rail. That’s the bottom line.”

Premier Rachel Notley speaks at the McDougall Centre in Calgary on Monday, Oct. 22, 2018.

Alberta is putting together a plan it will present to the federal government in the coming days, laying out the specific costs and options of taking action.

The province believes adding enough locomotive power to move two large-unit trains out of Alberta each day would help unclog the oil transportation system and lower the price discount, although new pipelines are still the long-term solution.

The federal government would be repaid for its rail investment by way of increased revenue (such as through higher corporate taxes) and by enhanced economic growth in the country.

The premier has industry groups in her corner.

“We would certainly support that,” said Gary Leach, president of the Explorers and Producers Association of Canada.

“Ottawa, just as they have put money into the Trans Mountain pipeline, they should look at what needs to be done on rail cars, because it’s costing even the federal treasury millions of dollars a day.”

Tim McMillan, head of the Canadian Association of Petroleum Producers, contends the Trudeau government has stymied private-sector investment from building much-needed pipelines, including the Northern Gateway project, that could have solved the bottleneck.

“We find ourselves in the situation where the federal government needs to step in to help correct some of the distortions they have created,” McMillan said.

“It’s the time for the federal government to think outside the box.” 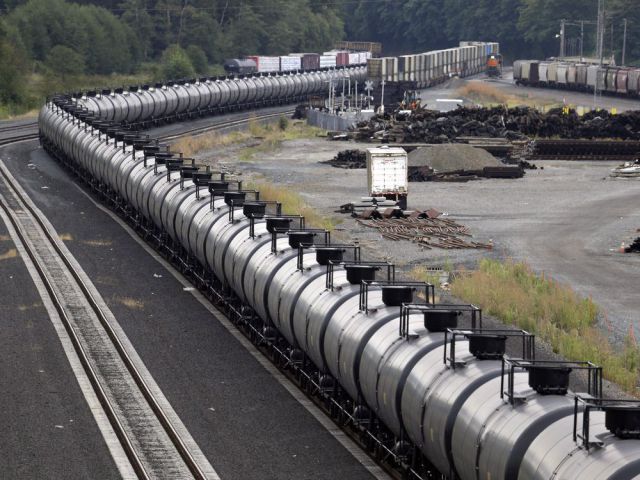 A northbound oil train sits idled on tracks, stopped by protesters blocking the track ahead, in Everett, Wash., on Sept. 2, 2014.

Oil-by-rail exports have been increasing this year, hitting an all-time record of 206,000 barrels per day (bpd) in July, up 73 per cent from a year earlier.

The industry expects the number will reach 300,000 bpd by the end of this year, and demand for rail will keep growing in 2019 as oilsands production increases.

Energy consultant Greg Stringham, who headed an oil-by-rail committee for the Alberta government earlier this year, said the market will likely need around 450,000 barrels per day of rail capacity sometime next year as pipelines run full.

The next major pipeline to be completed, Enbridge’s Line 3 replacement project, is not expected to be operating until late next year.

The only obvious option for the oilpatch is increasing the capacity of rail, but it’s not an immediate solution.

It typically takes around 12 months for railway companies to order new locomotives, and the real crunch period for western Canadian oil prices is unfolding right now and into 2019, Stringham said.

As Canadian Pacific Railway CEO Keith Creel said last week on a conference call: “The pipelines will come. It’s not a matter of if, it’s when.”

Stringham estimates Alberta needs another two unit trains to boost the rail transportation capacity by about 120,000 barrels per day. To do so, Ottawa — or the province and industry — would need to finance about 80 new locomotives that producers could access.

“About $300 million to $400 million would buy you the locomotives. Now, you can’t just go to the local GMC dealer and say I want locomotives. That’s where the issue is and it’s more than a cost issue, it’s a timing issue,” said Stringham, a former CAPP vice-president of oilsands.

“I think rail is the only mid-term option. The real difficulty is there are no short-term options that can deal with what is going to happen in the next six to nine months.”

The Trudeau government wasn’t eager to address the issue Tuesday, with a statement by Natural Resources Minister Amarjeet Sohi avoiding the question of whether Ottawa would consider a request to invest in locomotives.

Like a train rumbling down the track, the discount on Canadian oil is picking up speed.

Ottawa has to decide soon how to best slow it down.

Previous : Ontario’s biggest industries have to wait to see how much the new carbon tax will cost them
Next : How the Major Players Have Performed in the First Half of 2018! – XI Technologies