Western Canada Select was down almost 20 per cent to $22.71 a barrel early Monday, in line with the drop for West Texas Intermediate (WTI), which had fallen to US$32 a barrel, down more than $8 from Friday’s close.

Brent futures suffered the second-largest drop on record in the opening of trading in Asia, behind only the plunge during the Gulf War in 1991. As the global oil benchmark plummeted to as low as US$31.02 a barrel, Goldman Sachs Group Inc. warned prices could drop to near $20 a barrel.

that begins in April. Every $1-a-barrel drop in the average price over the entire year costs the treasury $355 million in lost revenue.

On Sunday, Alberta Energy Minister Sonya Savage said the government will closely follow the developments on oil markets and the potential effect on the province.

“There are challenges ahead but our energy industry has lowered costs and become efficient over the years. Albertans are resilient and we’ll get through this,” she wrote on Twitter.

Premier Jason Kenney, who last week suggested his government’s promise to balance the provincial budget by 2022/23 may not happen, will address the issue at a 4 p.m. news conference Monday in Calgary. 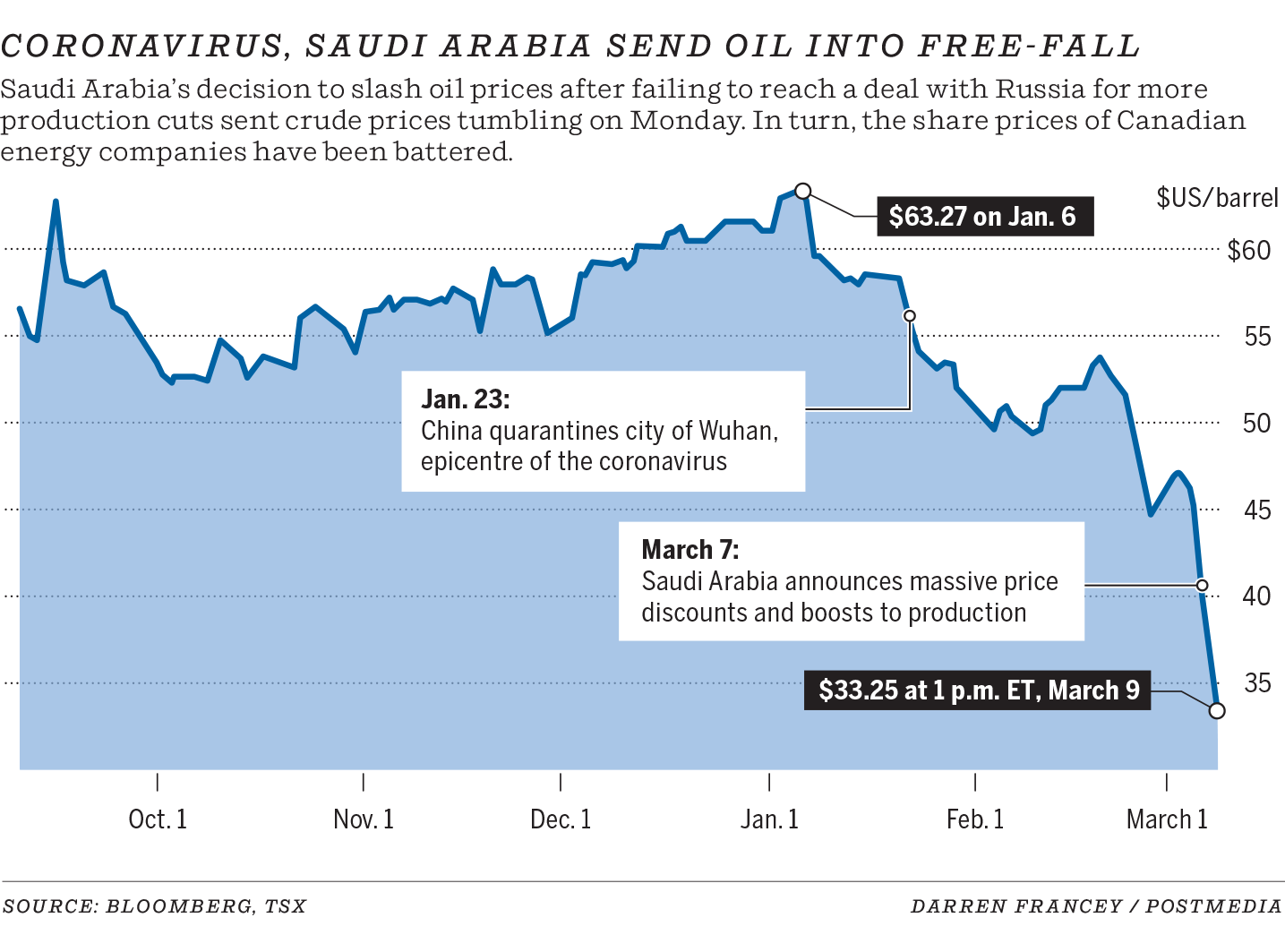 The oil decline hammered Canadian energy stocks Monday. The 30-company S&P/TSX energy index plunged as much as 22 per cent, its biggest intraday decline in decades. Among the biggest decliners were Cenovus Energy Inc., which dropped as much as 49 per cent, and MEG Energy Corp., which tumbled as much as 47 per cent.

Some Alberta producers have already trimmed capital budgets or deferred drilling into later in the year, while Vermilion Energy chopped its dividend in half on Friday.

With the oil price dropping into the $30-a-barrel range, more spending cuts will likely be coming.

Companies entered the year with oil above US$60 a barrel. Now, many Canadian producers will have to re-examine their planned spending programs as their cash flow levels drop.

“This is a pretty bad sign. We are already having trouble with jobs. But if this was to continue, it’s fairly predictable that we would see increased job losses in Alberta,” said Tristan Goodman, president of the Explorers and Producers Association of Canada.

“You are going to see every executive team show up on Monday and re-evaluate where they are.”

Michael Tran, RBC Capital Markets managing director of global energy strategy, noted after a proposed agreement between OPEC and Russia to lower output fell apart on Friday, Saudi Arabia responded by slashing its selling price for crude into a number of regions by an unprecedented amount.

“Some in the market suggest this is a price war essentially getting started again. Others are looking as it as an attack on the U.S. shale industry. Whatever the motive, the bottom line here is it’s a game of survivor right now,” said Tran.

Companies that are efficient and low-cost producers that have strong financial hedges in place, locking in higher prices, will be set apart from the rest.

A weaker Canadian dollar will also help “provide a bit of a cushion, although not necessarily a lifeline for Canadian producers versus some of their counterparts south of the border,” he added,

The cataclysmic plunge in global oil markets will resonate through the energy industry around the world, and could also reshape global politics, eroding the influence of countries such as Saudi Arabia. The fight against climate change may also suffer a setback as fossil fuels become more competitive versus renewable energy.

Hammered by a collapse in demand due to the new coronavirus, the oil market is sinking deeper into chaos on the prospect of a supply free-for-all. Saudi Arabia slashed its official prices by the most in at least 20 years over the weekend and signalled to buyers it would ramp up output — an unambiguous declaration of intent to flood the market with crude. Russia said its companies were free to pump as much as they could.

Aramco’s unprecedented pricing move came just hours after the talks between Organization of Petroleum Exporting Countries and its allies ended in dramatic failure. The breakup of the alliance effectively ends the co-operation between Saudi Arabia and Russia that has underpinned oil prices since 2016.

The state-owned Saudi producer has privately told some market participants it plans to raise output well above 10 million barrels a day next month and could even reach a record 12 million barrels a day, according to people familiar with the conversations, who asked not to be named to protect commercial relations.

Following this very closely, along with potential impacts in Alberta. There are challenges ahead but our energy industry has lowered costs and become efficient over the years. Albertans are resilient and we’ll get through this. https://t.co/IAMCIciWnI

Oil prices have suffered massive drops each time that Saudi Arabia has launched a price war to drive competitors out of the market. West Texas Intermediate fell 66 per cent from late 1985 to March 1986 when the country pumped at will amid a resurgence of U.S. oil output. Brent crude briefly dropped below $10 a barrel when the kingdom had a showdown with Venezuela in the late 1990s.

With oil demand already plummeting due to the economic effect of the COVID-19 virus, traders forecast that prices will drop even farther. “The oil market is now faced with two highly uncertain bearish shocks with the clear outcome of a sharp price sell-off,” said Jeffrey Currie, head of commodities research at Goldman Sachs in New York.

The Canadian energy sector has been through a turbulent five-year period, with oil prices dropping sharply in early 2016 and then again in late 2018, as the discount on Western Canadian Select heavy oil widened sharply, battering producers.

“In this case, we have something entirely new — an epidemic (the COVID-19 virus) crushing demand in the largest oil-consuming region of the market, causing a surplus, and then you have Saudi Arabia deciding to throw extra supply on it, hopefully to accelerate the recovery, but it will also accentuate the price collapse,” said Kevin Birn, vice-president of North American crude oil markets at consultancy IHS Markit.

Oil prices this low will hurt other oil countries, including the United States, Russia and Saudi Arabia, Randy Ollenberger, an analyst at Bank of Montreal, told Bloomberg. About a third of U.S. exploration and production companies need WTI prices of US$55 a barrel to break even.

“The impact is usually the same every time. It’s going to be hard, it’s going to be tough. The Western Canada Basin has weathered this before, but it’s never fun.”