This spring, as the coronavirus pandemic battered the global oil industry, a 240-kilometre pipeline that could hold the key to Alberta’s future as an oil and gas-producing region quietly opened.

Known as the Alberta Carbon Trunk Line, the pipeline captures carbon dioxide emitted by a bitumen refinery and a fertilizer plant outside Edmonton, and carries it to an oilfield where it is pumped into the ground, where it is forever buried, and some is used to increase the amount of oil recovered.

The 14.6 million tonnes of sequestered CO2 represents close to 20 per cent of oilsands emissions, and offsets emissions from more than 2.6 million cars in Alberta. It is currently operating at around 11 per cent of that capacity.

The pipeline runs from Alberta’s industrial heartland, situated northeast of Edmonton, for 200 kilometres to oil reservoirs in the central part of the province.

The project shows how Alberta’s fossil fuels sector is taking steps that could help it survive in a world where carbon emissions is making it a pariah among large institutional investors, who are increasingly focused on climate change. 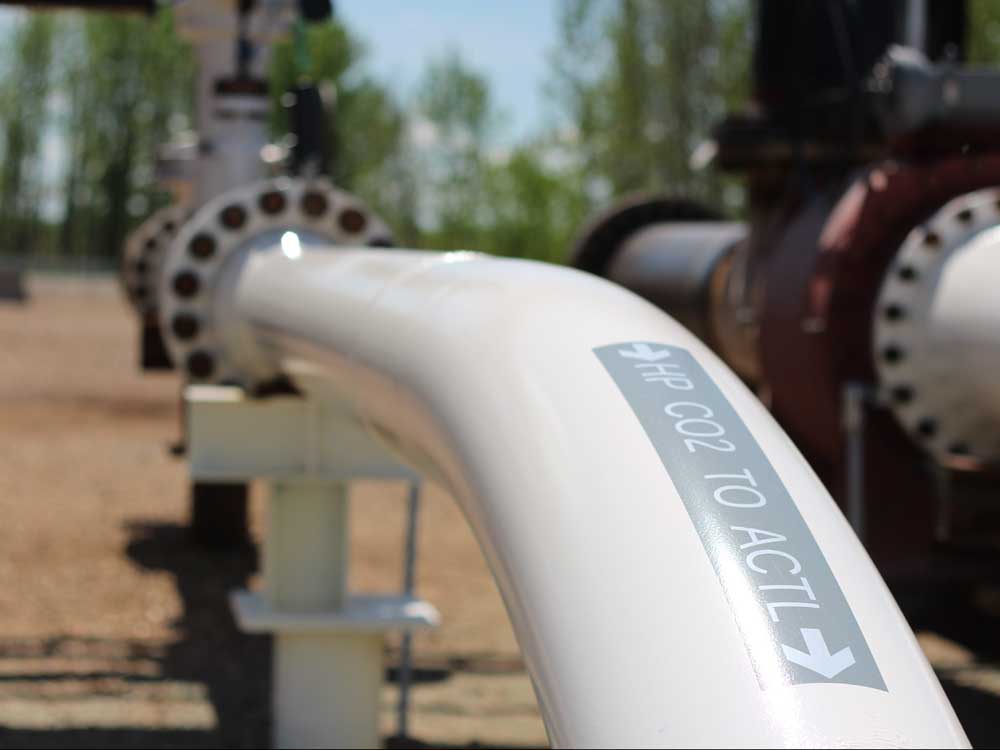 The ACTL, which has been operating since late March, officially announced its start this week, after the operators involved felt comfortable that the kinks had been worked out.

Jeff Pearson, president of the carbon business unit at Calgary-based Wolf Midstream, which constructed and operates the pipeline, said there is ample room for growth.

“It’s the backbone infrastructure,” said Pearson. “It’s like building the Trans Canada (highway) when you’ve got a few cars running up and down, but you know cars are going to take off.”

He said that the 240-kilometre pipeline, as its name suggests, is considered a trunk. Now that it’s built, his company believes it can begin to add lateral pipelines, much shorter in length, that can connect more carbon emitters with oil producers.

Currently, Enhance Energy Inc., a Calgary-based private oil and gas company, takes all of the CO2 and uses it at its Clive oil field in the province. The CO2 acts as a solvent and increases the amount of oil recovered, but also remains in the oil reservoir.

About 300,000 tonnes of the CO2 comes from a Nutrien Ltd.-owned fertilizer manufacturing plant, with the remaining 1.3 million tonnes coming from the North West Redwater Sturgeon Refinery , Pearson said.

Within several dozen kilometres of the trunk line, however, there are other oil refineries and oil producers, and Pearson said his company is in conversations with them.

“The first one took ten years to build,” he said. “The next ones are not going to take nearly that long.”

While the pipeline is billed as the largest pipeline to capture CO2 emissions from human activity, and was designed with excess capacity so more facilities can connect to it in the future, it does not necessarily provide a long term solution to climate change.

Even as it mitigates refinery emissions, it facilitates oil recovery, which may be burned by cars or in other ways, which still creates emissions.

“You’re still getting oil out of the ground, so it isn’t exactly solving the climate problem,” said Mark Jaccard, a professor at Simon Fraser University, who studies energy economics. “Eventually, though you are putting this stuff into deep saline aquifers.”

He said refineries have long stripped pollutants such as lead and sulphur from emissions, and so it makes sense that CO2 can be stripped out too.

At the moment, the Alberta Carbon Trunk Line, captures approximately 70 per cent of the CO2 emissions from the NWR Sturgeon Refinery, but Jaccard said that number can change as technology evolves.

Alberta oilsands producers have some of the highest costs in the industry, he said, so taking steps to transform CO2 from a waste product into a product that helps recover more oil will be necessary for the industry as carbon pricing raises costs for all producers.

“There is just so much oil in the earth’s crust, and so many cheap ways to get it, and Alberta is in a precarious position,” as a high cost-jurisdiction, he said.