CALGARY — Alberta’s government may not been keen to extend its forced oil production cuts beyond the end of this year, but analysts say the unexpected delay of Enbridge Inc.’s Line 3 pipeline over the weekend may force its hand.

The year-long delay for the Alberta-to-Wisconsin pipeline is also expected to prolong pressure on the province’s oilpatch by delaying new projects, deterring investors and causing oil-by-rail shipments to skyrocket above 500,000 barrels-per-day next year, obliterating previous rail records.

Analysts and government officials called the delay “disappointing,” “depressing” and a “setback” on Monday and said the severity of this delay is compounded by the fact that the two other active pipeline proposals out of Western Canada – Keystone XL and Trans Mountain — have also been delayed.

Enbridge shares tumbled six per cent to $44.52 at one stage Monday as the market digested its announcement from the weekend that the $7.6-billion, 370,000-barrels-per-day Line 3 pipeline project would not be moving Canadian oil to the U.S. Midwest until mid- to late-2020. The new in-service date is roughly one year later than expected.

Each of these oil producers supported the provincial government’s controversial move in December to impose a limit on how much crude domestic companies could pump, but analysts now expect that limit will be in place longer than expected.

“The limit on production is and always has been a temporary solution, and we don’t plan to extend it beyond the end of 2019,” said Mike McKinnon, spokesperson for Alberta Energy Minister Marg McCuaig-Boyd.

Since the curtailment order came into effect in January, the discount for Canadian heavy oil has shrunk from a record high of US$50 per barrel to under US$15 per barrel needed to justify paying the additional cost of shipping oil by rail.

“We expect that at full, uncurtailed production capacity the call on oil-by-rail services in Western Canada will surpass 500-600,000 bpd by mid-2020 before Line 3 can enter service,” Johnston wrote in a note.

Most analysts now expect curtailment will extend into next year.

“At the time that the government did the calculations on the production cuts and oil-by-rail, they had in mind that the pipeline would be online by year end,” said Dinara Millington, vice-president of research at the Canadian Energy Research Institute.

Similarly, Edward Jones analyst Jennifer Rowland said, “The cuts are going to stay through 2019 and maybe through 2020.”

But the delay would further hurt investor sentiment in Canada. “Companies have already been hesitant to make growth investments in Canada and this is just going to prolong it,” Rowland said.

ARC Energy Research Institute senior director Jackie Forrest said oil companies and the Alberta government have cumulative capacity for 600,000 bpd in oil-by-rail contracts, which is “more than enough to clear the market in 2020.”

She said companies may not use all of that capacity but does expect oil-by-rail to surpass records set in 2018 and in previous year.

National Energy Board data shows oil-by-rail exports from Canada hit a record high of 330,402 bpd in Dec. 2018, the last month for which data is available.

Before that ramp-up in oil-by-rail shipments, the previous record for crude shipments was 178,989 bpd set in late 2014.

Forrest said she did not expect delays to Line 3 would have a meaningful effect on the discounts for Western Canada Select heavy oil blends relative to the West Texas Intermediate benchmark as companies already anticipated needing crude by rail in 2020. They’ll just need more of it now. 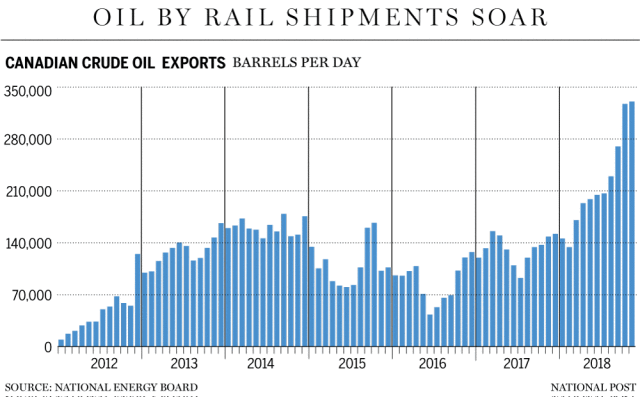 However, two new oilsands production by Cenovus and Canadian Natural with capacity of 50,000 bpd and 40,000 bpd could “put some added pressure on the forward curve for WCS differentials” if their start dates are not delayed in response to Line 3 decision, Raymond James analyst Chris Cox wrote in a research note.

“You’re not going to see the same amount of growth that some operators were planning for,” said Stephanie Kainz, senior research associate at RS Energy Group.

“This really isn’t great for Canadian oil,” she said.