There’s a race going on to attract billions of dollars of investment across the global energy sector into carbon capture and storage projects.

When will Canada get out of the starting blocks in this contest?

Canadian oilsands producers continue to work on a foundational $14-billion carbon capture and storage project in northern Alberta and are looking for federal and provincial governments to provide more assistance — and more clarity — as the U.S. cranks up its incentives for such developments.

Outside the oilsands, conventional petroleum producers are also eyeing the potential of carbon capture, utilization and storage (CCUS) technology to decarbonize.

However, a report by BMO Capital Markets warns that Canada is “falling behind” in CCUS policy following changes last month in the United States designed to attract investments into such big-ticket initiatives.

“The U.S. … policy advancement further underscores the need for substantially more robust incentives in Canada to bolster its global competitiveness in the decarbonization race,” says the report.

“The Canadian Investment Tax Credit (ITC) announced this spring falls far short and there remains the need for additional funding support from provinces, and/or better assurances around the value of future (offset) credits to improve project returns.”

In August, the U.S. Congress passed the Inflation Reduction Act, which included provisions to hike subsidies for projects to capture carbon dioxide emissions and sequester them deep underground.

The new policy increases the U.S. government’s existing tax credit for such initiatives to $85 for each tonne of stored CO2, up from $50.

It widens the gap between incentives offered by Washington and Ottawa’s new investment tax credit for Canadian CCUS developments.

“It has changed the competitive landscape between Canada and the U.S,” said Mark Cameron, vice-president of external relations for the Pathways Alliance oilsands group.

“For Canada to have a level playing field, there would have to be additional support.”

Details of the Canadian credit, initially promised in the 2021 federal budget, were unveiled in last April’s budget.

It set the federal tax credit rate at 50 per cent for spending on equipment to capture CO2, and it offers a 37.5-per-cent credit for investing in equipment used for transportation and storage in such projects.

Consultations over the structure of the investment tax credit are slated to wrap up on Sept. 30.

For Alberta and the oilsands sector, carbon capture technology is viewed as essential to ensuring the industry decarbonizes as Canada strives to reach its net-zero goals by 2050.

The oilpatch is Canada’s highest emitting industry; it also generated 16 per cent of the country’s exports in 2020 and employed almost 180,000 people directly.

The Pathways Alliance, which represents six of the country’s largest oilsands producers, has been working together for more than a year to reach net-zero emissions by 2050.

The group’s foundational project features a 400-kilometre CO2 transportation line that would initially connect 11 oilsands facilities, mainly in the Fort McMurray and Christina Lake areas, to an underground storage hub in Cold Lake. 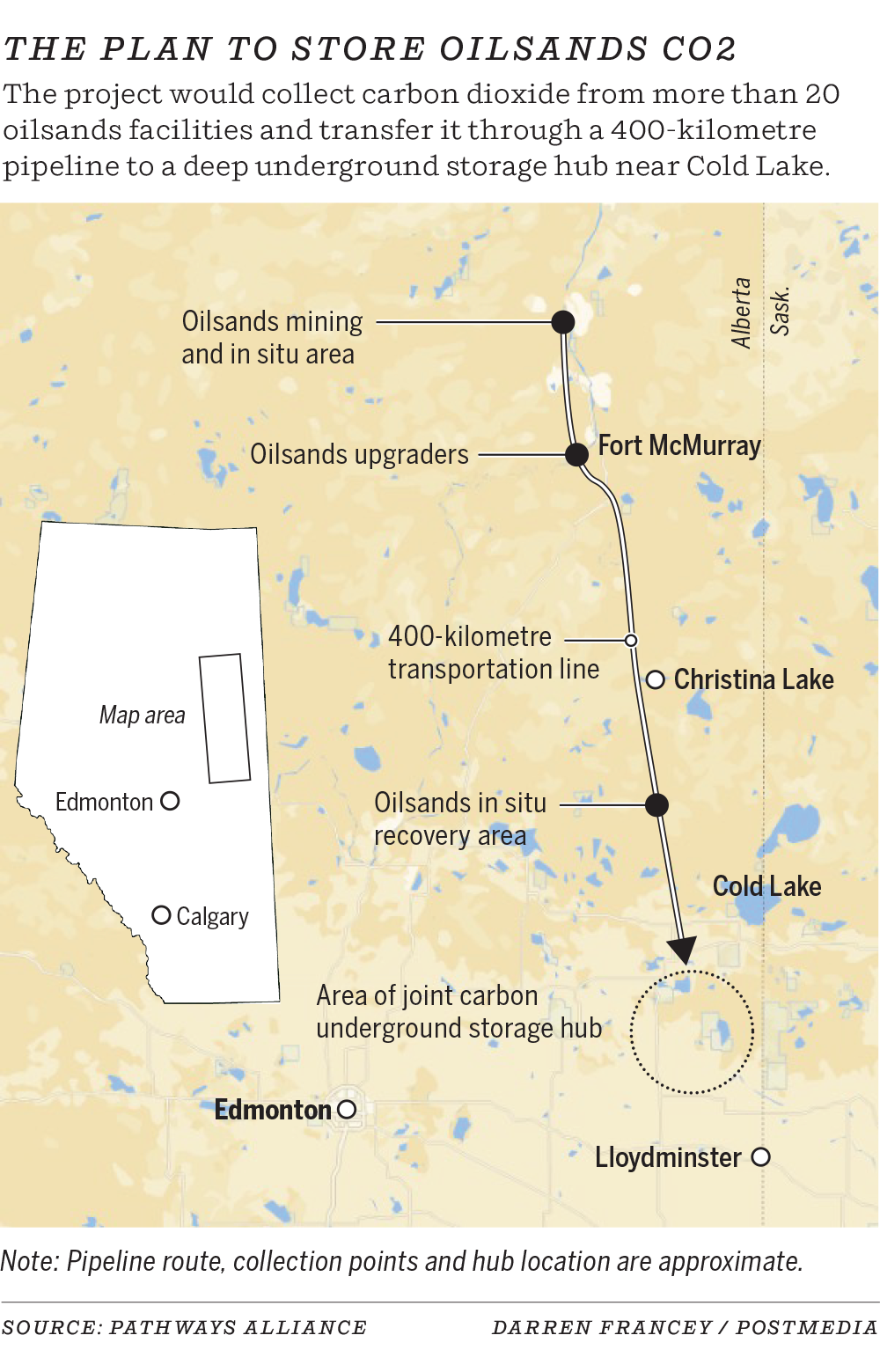 The first phase of the project is expected to cost about $14.5 billion.

The BMO report notes the U.S. program essentially offers companies a guaranteed price for carbon offsets generated by CCUS projects over a 12-year period and said it will likely “fuel another surge in project announcements.”

The Canadian investment tax credit provides no such guarantee.

In an interview, Jared Dziuba, report co-author and BMO analyst, said Wednesday that changes to the U.S. policy “puts them way ahead of the curve, relative to Canada,” to decarbonize its heavy industries.

BMO estimates the new U.S. program will cover about two-thirds of the total costs of more complex CCUS applications, while Canada’s credit will cover less than 25 per cent of total costs for facilities.

According to the Canadian Association of Petroleum Producers, the federal investment tax credit is less than half of what’s available in the U.S. or Norway.

There is staunch opposition from some environmental groups to the idea of Ottawa subsidizing CCUS projects in the oilsands.

The Pembina Institute has backed the role of carbon capture and storage and the federal tax credit but doesn’t support increasing it.

“Our view would be a 50-per-cent tax credit for CCUS is extremely generous,” said Pembina’s deputy executive director, Simon Dyer.

It remains unclear if Ottawa will alter its incentives, given the latest move in the U.S.

Asked about the prospect of any changes, the press secretary for Finance Minister Chrystia Freeland said in a statement the Canadian tax credit is designed to encourage industry to “move quickly.”

The tax credit was welcomed by the Pathways Alliance members, but they’ve not made a final investment decision.

Oilsands producers have also been looking for provincial assistance or assurances to proceed.

“It’s a very expensive project,” Canadian Natural Resources president Tim McKay said recently. “It would be good for them to basically show their support of carbon capture in the province.”

In Alberta, where the province made early public investments into CCUS, the government has said it will be providing a multibillion-dollar contribution to new developments because oilsands operators can deduct their capital expenditures on such projects from royalties paid to the treasury.

That could account for up to 30 per cent of a project’s capital costs, said Energy Minister Sonya Savage.

“They can’t have both royalty reductions and cash from the government,” Savage said in an interview last month.

“They have to put some of their own capital into it.”

Companies are looking for more details on how the royalty deductibility in Alberta would apply to its projects, while they’re also seeking more certainty from Ottawa on carbon offsets.

“We have the potential to be a global leader if the policy items add up to be competitive,” said Dziuba.

“It just feels like we’re continually sort of one step behind in Canada.”