These pro-energy, pro-pipeline rallies that have been taking over downtown streets since Prime Minister Justin Trudeau’s visit three weeks ago have been so polite they’re actually kind of cute.

Need to cut through the crowd to get to the front, just say, “Excuse me, sorry,  pardon me.” The crowd will part like the Red Sea and you’ll be greeted with smiles.

Many who have joined these protests are eager to have their reasoned, logical and eloquent positions — about the fuel that still drives the Canadian economy — heard and understood. It’s not unusual for their protest signs to not just be three or four words long — as is customary — but two or so sentences long. Numerous signs can be described as paragraphs!

For instance, at Monday’s rally in front of city hall, Keven Blencowe, a landman with Canadian Natural Resources, holds a sign that reads: “From 2008 to 2020 it’s estimated Canada will have lost $92 billion due to the oil price discount. This is a gift from Canada to the USA.” Two sentences — 27 words!

Ask anyone in the crowd — young, old, white collar or blue — why they’re there and they can eloquently explain how all of Canada should be concerned about Alberta’s oil and gas being landlocked. They use words like “differential,” “curtailment,” “social licence” and “diluent.” By contrast, I’ve covered protests where many of the people interviewed had no idea what they were protesting. I recall one anti-globalization protester — after being pressed to explain what was being protested — say they were against “the man.”

Calgary Police Service Acting Sgt. Rich Wall was providing security for this latest CanadaAction.ca-organized noon-hour rally in front of city hall and while he and his team were alert, he was not worried.

“These pro-pipeline crowds are always as good as gold,” said Wall, who estimated 2,700 people turned out.

“I was in front of the Hyatt when Prime Minister Trudeau was in town and that was a big, loud crowd, but alway polite, respectful and peaceful,” added Wall.

People at a pro-pipeline rally in downtown Calgary on Monday.

In other words, these are not the kinds of protests you see on television, where police must wear riot gear, cars are overturned, effigies of politicians are set ablaze or windows broken.

These protests are made up of those who pay their taxes (on time or early), raise good kids (who volunteer), support local charities (with time and money), work hard and always say please and thank you.

All 15 elected members of council passed a motion unanimously Monday supporting Alberta’s energy industry, and the mayor and many councillors spoke at the rally.

Cody Battershill, the eloquent, earnest young Calgarian who founded Canada Action — which has been organizing these attention-receiving rallies — took to the microphone after Mayor Naheed Nenshi was lightly booed when he revealed that he was going to make some comments in French.

“Excuse me everyone,” Battershill broke in, politely. “We need to respect that this message needs to get across the nation and appreciate what council has done here today and I ask for your respectful silence while the mayor is speaking to our fellow Canadians in Quebec. We need to have a positive and balanced, respectful conversation.”

But therein lies the problem. The conversations everywhere else are not respectful, balanced and positive.

They are slanderous, negative and disrespectful. On the heels of learning that Quebec would be getting an extra $1.4 billion of equalization for a total of $13.1 billion, Quebec’s premier said there was no appetite in la belle province for Alberta’s “dirty oil” to be shipped via pipeline through its land. So, it’ll take Alberta’s oil money, but not it’s oil. No wonder all mentions of Quebec got booed. 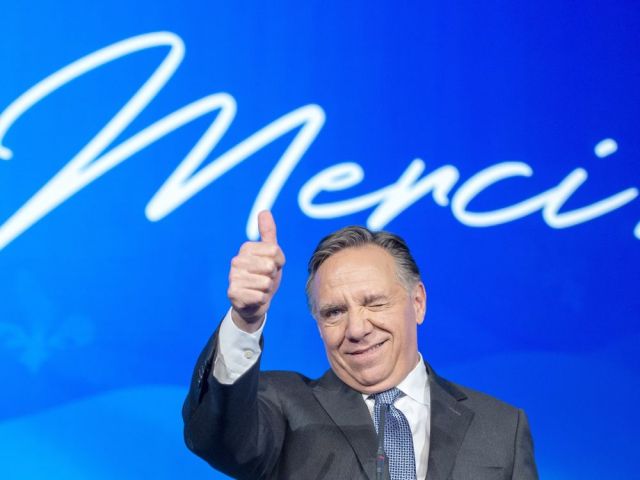 The foes of the country’s largest natural resource industry don’t play fair at all. In fact, they are being useful idiots for their U.S. puppet masters, who are funding the anti-oil, anti-pipeline advocates.

Apparently, Whistler was just one of more than one dozen municipalities that voted in favour of asking for payment from energy producers to pay for preparing for the costs of climate change. West Coast Environmental Law has received more than $300,000 CDN from the Tides Foundation since 2012.

As researcher Vivian Krause has shown, U.S. interests have been supporting Canadian environmental groups to help strand Canadian energy — which helps improve the stock of U.S. energy companies, that receive our oil and bargain basement prices.

Twelve-year-old Salem Geczi was playing hooky from school — with the blessing of her mom, Kathleen — to lend her voice to the “crisis Alberta is facing” and to learn some important lessons on civic engagement. 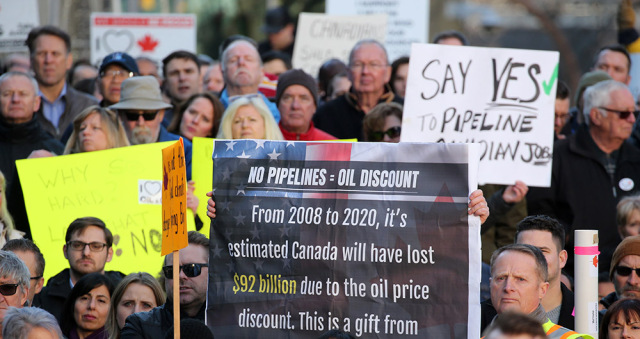 Pro-pipeline signs tend to be well-thought out.

“My dad works in the oil field to support me because this wheelchair was not free — it cost $4,000,” said the sign she was holding.

“We’re proud of the work my dad does,” she said, simply. “He works hard and that should be respected. I didn’t like the booing but I understand it.”

As for Battershill, 34 — who started this fight 10 years ago and surely deserves some kind of award for his efforts — he got the largest cheer from the crowd Monday, but he doesn’t want this movement to become as rude and ill-informed as the critics it’s fighting.

Now that would be tough to accomplish. So, let the politeness continue, keeping in mind that a little bit of rudeness now and again just might wake up the rest of the country.