Alberta’s electricity sector has been jolted by policy changes over the past four years, from phasing out coal-fired power plants and building a new capacity market to aggressively promoting renewable energy.

But what will happen after the spring election?

At a renewable energy summit in Calgary last week, industry players tried to understand what the election might mean for the future of Alberta’s electricity sector.

“We are watching it (the election) very closely,” said Brian Vaasjo, CEO of Edmonton-based Capital Power Corp., which operates coal-fired generating plants and is building a new wind project in Alberta.

“We don’t expect power and power prices to be an election issue . . . and certainly wouldn’t want it to become a political issue and have policy developed a little bit on the fly.”

What is clear is that Alberta’s electricity sector has been dramatically transformed since the Notley government took power in 2015.

As part of its climate plan, the government announced all coal-fired electrical generation would be phased out by 2030. The province later agreed to pay the plant owners $1.36 billion in compensation.

Another key policy pillar was setting a goal that renewable electricity would make up 30 per cent of all power generation by 2030, a big change for a province that has traditionally relied on coal to carry the power load.

So far, the rates achieved have been record-low renewable electricity prices in Canada.

The second and third auction results announced in December saw successful wind projects come in at an average price of 3.9 cents per kilowatt-hour, below current wholesale prices.

Finally, the NDP government announced in 2016 it would transition away from the energy-only market created during deregulation two decades ago, a system that saw generators paid only for power sold into the grid.

Under a newly designed market to be in place by 2021, generators will receive “capacity payments” for having power available, regardless of whether it’s used or not.

The change is expected to attract further investment into building more generation.

“We made our decisions with an eye to stability,” she said in an interview.

“We may have to respond to changes in technology or power market structure over the course of the next four or five years, but the basic architecture is there.”

With the United Conservative Party running ahead in recent polls, a change in government could see a new direction for the sector, although it’s unclear exactly what changes would be in store.

While electricity is not normally a top-of-mind issue for voters, power prices can turn into campaign politics, as was seen in Ontario last year.

Doug Ford vowed to cut electricity prices and, as premier, he’s cancelled more than 750 renewable energy contracts and pulled the province out of a cap-and-trade carbon market.

UCP Leader Jason Kenney has promised to axe Alberta’s carbon tax, although he’s indicated a levy on industrial greenhouse gas emitters — similar to one instituted under the Stelmach government — could remain. 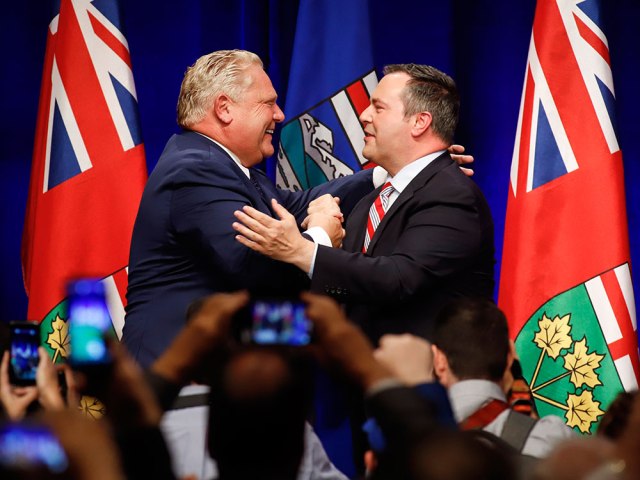 While the party is still fine-tuning its campaign platform, UCP energy critic Prasad Panda said it would respect previously signed contracts that are in the interest of Albertans.

The Calgary-Foothills MLA said in his personal view, the phase-out of coal-fired power plants is “too far down” the road to halt.

The bigger questions likely surround the fate of the capacity market and renewable energy program.

Panda said there’s still time for the UCP to review the decision to shift to an electricity capacity market by 2021, as the party needs more information to fully assess it.

As for renewables, he noted the first three auctions nabbed a low price, but he believes hitting the 30-per-cent target by 2030 “is going to be a stretch.”

“In principle, we like renewable energy and support that, as long as market forces invest in that without taxpayer subsides,” he said in an interview.

Alberta has added more than 1,300 megawatts of power through the renewable program and this trend will grow as costs fall, although the pace of development could slow depending on future government policies, said Duane Reid-Carlson, chief executive of electricity consultancy EDC Associates.

Players active in developing wind and solar power are confident such energy sources will keep expanding in Alberta, with or without the existing government program.

“Renewables are now cost competitive with traditional sources of power generation, if not even the lowest cost source,” said Dan Balaban, CEO of Greengate Power Corp. in Calgary.

“It’s a sector that should continue to thrive, regardless of who is in government.”

But the future of carbon pricing and structure of the electricity market remain key variables moving forward.

It’s estimated Alberta will need to attract $25 billion in new investment in power generation by 2030 to reach its renewable target.

“The renewable electricity program certainly makes Alberta the attractive place to invest that it is currently . . . it provides revenue certainty,” said Evan Wilson of the Canadian Wind Energy Association.

“A price on carbon is certainly a real foundation to development.”

Vaasjo said Capital Power has long expected it would face a carbon levy in the range of about $30 per tonne, although how widely it’s applied is a key detail.

Ultimately, players across the sector believe one of the biggest issues is creating long-term certainty for Alberta’s power industry as quickly as possible, regardless of who wins the upcoming election.

“There has been a tremendous amount of change and we are getting to a point where there is some stability,” said Vaasjo.

“We’re hoping things would continue to be stable, or will get to be stable again very quickly.”