Green Impact Partners will begin construction on the $1.2-billion Future Energy Park in Calgary this spring, following land-use approval from the city earlier this week.

The project will use non-food-grade waste wheat to produce renewable natural gas, ethanol and cattle feed. The energy park will pump $50 million in taxes back into city coffers and create $150 million in direct revenue to rural wheat producers on an annual basis.

The project was first announced in May when the local company secured 52 acres in southeast Calgary, and it has been undergoing engagement since then. The land-use approval paves the way for the project to proceed.

“Excitement and relief are good ways to describe it,” said Jesse Douglas, CEO of GIP. “We had planned to start this year and we were really, really anticipating doing that, and until you kind of have the piece of paper in your hand you don’t know if you’re going to.”

The facility is being promoted as the largest carbon negative energy facility in North America, with a carbon intensity score of negative-20. Once operational, the facility is expected to produce about 3.5 million MMBtu of RNG, more than 300 million litres of ethanol, and about 235,000 tonnes of cattle feed every year.

The park will create 800 jobs during two years of construction, with GIP promising to use local engineering, construction and environmental firms for the project. 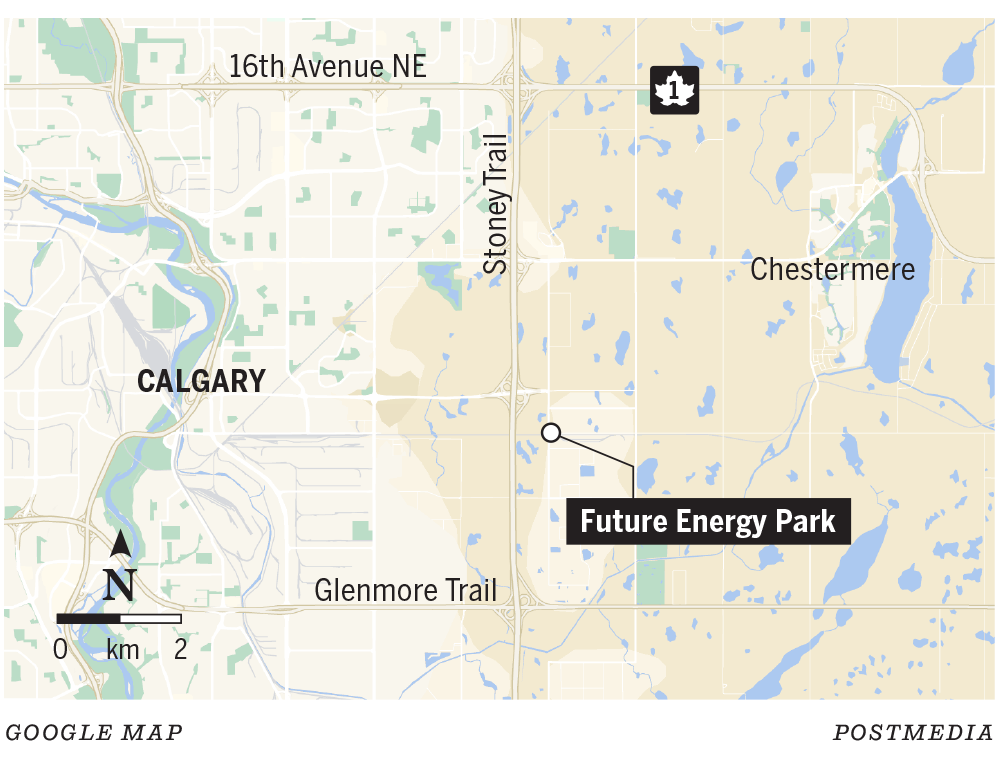 “This project is a great example of how we move forward to a more sustainable future, both from an economic and environmental perspective,” she said in an interview with Postmedia.

The Future Energy Park site is at the corner of 84th Street S.E. and 50th Avenue S.E., along the border of Rocky View County and the city.

The mayor said the site is well suited for traffic requirements and other needs of the project.

She said through engagement and committee and council meetings at city hall, there were some concerns raised over potential odours created by the project, but the company gave assurances that smells and noises will not be an issue. GIP has confirmed this through studies.

Douglas said since the project was first announced in May of 2022 they have been actively making adjustments to the plan, raising the level of investment from $1 billion to $1.2 billion, with inflation also a contributing factor. This includes about $10 million in changes to specifically address concerns from stakeholders and neighbours over the appearance of the facility, noise and traffic. The project has been mainly funded through private investment.

GIP has a target of opening in 2025, with its products and byproducts having a wide range of uses in the local economy.

This is one of 15 projects in the works for GIP in Canada and the U.S., but also its largest and is designed to help fill a growing demand for green energy.

It will process waste wheat to produce renewable natural gas and ethanol, and the byproduct of the wheat is high-end livestock feed and fertilizer.

Douglas said the natural gas and ethanol it will produce can be mixed seamlessly into current supplies to help offset the use of fossil fuels.

The applications for biofuels are widespread and can be blended with fuel for anything from passenger cars to jet airplanes. This is an important piece in meeting carbon emission reduction targets, though engines that run entirely on ethanol are a ways off.

“I think that the potential is there . . . but we probably are better to blend it right now and leave that existing technology,” he said. “We’ve got the average car lasting on the road for 20 years, we want every car to be able to burn this.”