Last December, most premiers and the prime minister adopted a landmark national climate plan to cut carbon pollution and spur clean growth. For Canada’s clean energy sector, a national climate plan is incredibly welcome. It signals to developers and investors that Canada is an important market for climate solutions, and that the demand for clean power will grow over time.

In the near term, one of the best opportunities for Ottawa to send that signal is to adopt smart and effective regulations for power that comes from from natural gas. That’s because, to make real headway on cutting carbon pollution and to spark clean growth, we need to power more and more of our activities and industries with clean, carbon-free electricity.

As we make that shift, power from renewable sources—like sunshine, wind and water—will increasingly play a starring role, while fossil fuels like coal, oil and natural gas will transition to roles as understudies or exit the stage.

In the clean energy future we are moving towards, we’ll drive cars or hop on buses and commuter trains powered by electricity rather than gasoline or diesel fuel. We’ll build homes so efficient, they’ll need very little energy for heating and cooling—and the energy we do need will come from a cleaner electricity grid, or from our own rooftops instead of from natural gas and oil. We’ll design innovative industrial processes that integrate energy savings and clean energy technology every step of the way.

So Canadians will still be manufacturing things, shipping goods, and running a world-class economy—but the fuel for those activities will be a lot cleaner than what we’re burning today.

At this point, you might be wondering whether renewable energy is up to the job. Wind and solar power are often dismissed as niche technologies—nice for homes in California, maybe, but not capable of fuelling an entire economy.

And the prices of clean energy technologies are falling all the time. From 2010 to 2016, the cost of utility-scale solar power in the U.S. plunged by over 78 per cent; the cost of wind energy systems fell by over 62 per cent.

Those falling prices have made clean energy so competitive that even U.S. President Donald Trump won’t be able to turn back the clock.

Nor should he want to: climate change aside, over 200,000 Americans work in the solar industry today—more than the total employed in oil and gas extraction. And according to the U.S. Bureau of Labor, “wind turbine service technician” is the fastest-growing occupation in the country.

Software, smart grids, efficient buildings and energy system expertise are all in demand, and Canada is well-placed to deliver them.

Our southern neighbour always looms large in Canada, with good reason—but the clean energy market is truly global. The planet’s biggest clean energy investor? China, a country that invested over US$88 billion last year, well ahead of the second-place Americans at US$58 billion.

So, while we should export more clean power to the U.S., a country that burns far more coal than we do, we can also sell clean technology to growing markets around the world. Software, smart grids, efficient buildings and energy system expertise are all in demand, and Canada is well-placed to deliver them.

In fact, clean power is a competitive advantage for our country. We have one of the cleanest grids in the world today, with over two-thirds of our electricity coming from renewable sources (largely hydro power). That’s a very strong foundation to build on.

And the new national climate plan did exactly that, starting with its commitment to phase out traditional coal power by 2030.

Getting off coal is important for tackling climate change, but it’s also very good news for Canadians’ health—a 2016 study by health and environmental organizations found phasing out coal by 2030 would prevent more than a thousand premature deaths and some 870 hospital visits, while saving nearly $5 billion in costs to society, including healthcare expenses and lost productivity.

In the new climate plan, governments also pledged to build more transmission lines, so that regions generating clean electricity can send it to the parts of the country (or the continent) still burning fossil fuels for power. They have committed to more energy storage, which also helps electricity markets take advantage of more wind and solar power. And they’ve said they will help remote and northern communities replace diesel—an expensive, noisy, and dirty fuel—with cleaner electricity. 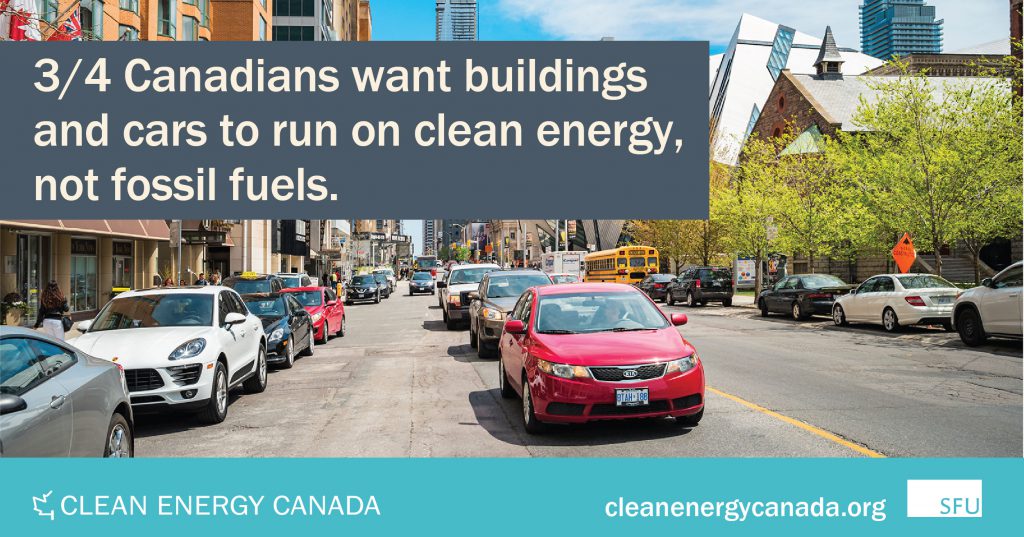 Canada is already building this clean energy future on a firm foundation. There’s no good reason to stop at the ground floor.

To make sure the next level is solid, the federal government needs to adopt smart limits on emissions from natural gas-fired electricity. Natural gas may burn cleaner than coal, but it’s still a fossil fuel. As we make the shift to a grid that’s as clean as possible, there will be a need to limit the role of natural gas in Canada’s electricity system in the decades ahead.

Ottawa has proposed draft regulations to curb greenhouse gas emissions from new gas plants, but the current version of those regulations would not require companies to match the level of emissions performance achieved by the best available gas plant technologies. The proposal would also set a static, unchanging standard for the amount of greenhouse gas emissions natural gas plants release—but we know that our power grid needs to get cleaner and cleaner over time. To achieve that goal, natural gas will eventually need to play a much less prominent role in our energy mix than it does today.

The final regulations Ottawa adopts should send that signal loud and clear. A standard that gets stronger—either year over year, or through second and subsequent phases of increasing stringency—would let potential investors and operators know that the future for natural gas power plants is one of diminishing value.

Making the shift to clean electricity is central to Canada’s national climate plan—and regulating emissions from natural gas is part of that transition. As we position our country to compete and thrive in the next century of clean growth, let’s be sure to build on our country’s renewable power advantage.