Out of the vastness of southwestern Saskatchewan, a solution is emerging to a little-discussed problem — a gap in the global helium supply chain.

In recent years, as fears of a helium shortage creeped up, prospectors have journeyed to the Canadian heartland and drilled deep into the earth in search of helium; and at least one company there has already started commercially producing gas.

Party City is just the tip of the iceberg

The ramifications of a helium pinch came into focus earlier this month when New Jersey-based Party City announced it had raised prices in certain categories of balloon in the face of “helium headwinds.” Its chief executive said “mother nature” would determine whether there’s enough helium to meet the company’s demand; and he demurred on whether prices would ever come down.

Party balloons, however, constitute only a small percentage of the helium market; and its use in magnetic resonance imaging, or MRI, machines, space exploration, semiconductors and other technology applications has stoked wider concerns that a price spike could disrupt more than the sale of balloons — and the Instagram and other social media posts for which balloons form essential backdrops.

“Party City is just the tip of the iceberg,” said Nicholas Snyder, chief executive of North American Helium, who divides his time between New York and Calgary, and whose company has been exploring in Saskatchewan near the Montana border.

Snyder said his company’s goal is to begin commercial helium production within two years. He claimed his company has discovered the first new helium fields in several decades, and has ambition to begin producing about one per cent of global supply within two years, gradually ramping that amount up further.

“We’ve been focusing really on not just one deposit, or field, but a long term helium production business in Canada,” he said.

Of course, his claims to being the first of anything-helium related in Saskatchewan do not go uncontested.

“We were the first crazy folks to poke a hole in the ground for helium’s sake,” said Jeff Vogt, chief executive of Richmond, Virginia-based Weil Resources Group, which began producing a small amount of commercial helium near Mankota, Saskatchewan in 2016.

Now, his company is also exploring nearby in Alberta. 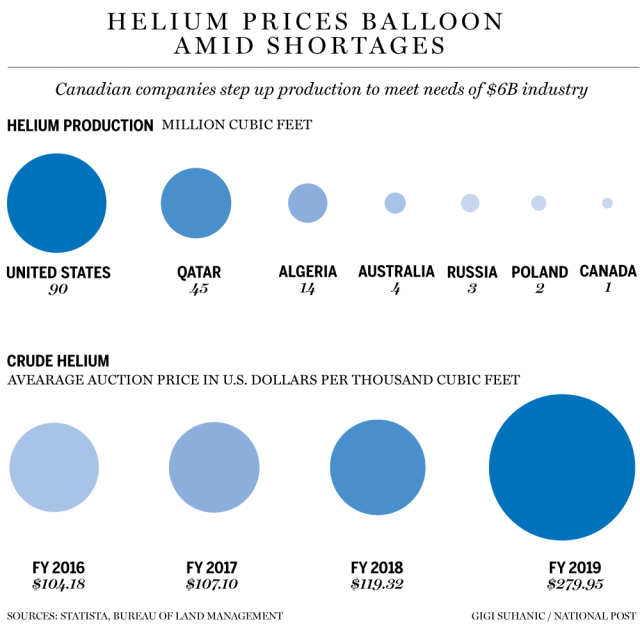 Although helium is not exactly scarce, it is generally a byproduct of natural gas or liquefied natural gas production, and its value by comparison to those commodities is minuscule.

“I’ve heard it described it as the flea on the tip of the tail on the dog,” said Phil Kornbluth, of Kornbluth Helium Consulting, a market analyst who sits on North American Helium’s board. “It’s not a huge business.”

He estimated that the current market size is now US$6 billion after prices shot up dramatically in 2019.

Still, with most production tied to other gases, supply cannot be easily ramped up to meet demand, and Kornbluth said the market is currently in shortage.

“I haven’t heard of any semiconductor labs being shorted or rocket launches being shut down,” said Kornbluth, but he added prices are up and not all customers are receiving their full allocation.

Much of the price increase results from the fact that the U.S. federal government has been selling down a stockpile originally started in the early part of the 20th century, when blimps were still in wider use.

Snyder said his company has been selling a stockpile of helium for prices in excess of US$500 per thousand cubic feet, nearly 80 per cent higher than the reported US$280 price at the most recent U.S. federal government auction.

Both Snyder and Vogt describe their quest to find and produce helium in almost mythical terms: Gravity cannot hold onto it. Once it escapes into the atmosphere, it is gone forever.

“This is about the geological trapping of a molecule that otherwise floats up to the sun,” said Vogt.

Members of the party store industry say it’s easy to understand why helium is held in such high regard.

“Balloons are the quickest, cheapest and most colourful way of decorating a room,” said Mel Grevler, founder of Party City Supply Depot Ltd, a 12,000-square foot store in Thornhill, Ontario.

So far, Grevler says he has been able to avoid hiking the price of balloons by locking in a contract for helium several years ago when fears of a shortage first emerged.

Asked what would happen if helium became too expensive for balloons, Grevler doesn’t skip a beat.

“It would be a crisis,” he replied.