Coming out of a global pandemic, Canadians want an economic restart that is green, says the country’s new finance minister.

In the grips of a downturn that has sent unemployment rates skyrocketing, they also want jobs, says Chrystia Freeland.

A new report by a coalition of more than 35 business, labour and Indigenous groups indicates with the right policy changes, Canada’s natural resources sector — including the forestry, energy, mining, and related manufacturing industries — could create up to 2.6 million jobs and expand the economy by 17 per cent.

And the sector can do it in an environmentally responsible way.

“Few other realistic growth opportunities exist that could come close to matching the (nearly) 2.7 million new jobs that could be made possible,” concludes the report, Securing Canada’s Economic Future: Natural Resources for Real Jobs and Real Recovery.

“Canada has an unmatched array of natural resources … that can drive national prosperity, while simultaneously making Canada a world leader in emissions reduction technology and action on climate change.”

The report is backed by groups such as the Canadian Chamber of Commerce, First Nations LNG Alliance, Canadian Manufacturers & Exporters, and the Forest Products Association of Canada.

If this sounds like familiar terrain — that we can balance the economy and the environment — it is.

But it’s taken on greater prominence with the economic crash and need to put people back to work.

The coalition has forwarded the report and its 19 recommendations to the Trudeau government, which is preparing to release a budget later this year.

Coalition organizer Stewart Muir of Resource Works said Canada has the ability and know-how to produce its natural resources while lowering emissions with technology, such as through carbon capture and storage, or using hydroelectricity in resource extraction.

“I don’t see green recovery as inconsistent in any way with our report. We really have to go in this direction, so let’s use the tools we’ve got,” said Muir.

Some of the recommendations are broad, but essential, such as calling for the country to “endorse the Canadian natural resources brand,” and to maximize Indigenous economic participation and employment.

It calls for improving infrastructure in the country, establishing a national low-carbon energy grid and promoting electricity interties between provinces.

The government can assist emissions reduction technologies by adopting a tax credit for deploying carbon capture, utilization and storage.

It recommends developing an “integrated climate and natural resource strategy that reconciles climate objectives and export of low-emissions resource commodities.”

A lot of these ideas are built on promoting Canada as a safe, environmentally responsible supplier of minerals, forest products and energy that the world needs.

“In some respects, the brand has lost a little bit of prominence over the years and it’s something we should be shouting from the mountaintop,” said Brock Mulligan of the Alberta Forest Products Association.

“In Canada, we do it the right way and the world ought to know that.”

This comes as the Trudeau government has adopted a national target of net-zero emissions by 2050.

Whatever happens with the recovery in the wake of the pandemic, it’s clear Ottawa wants to build a durable greener economy for the future. 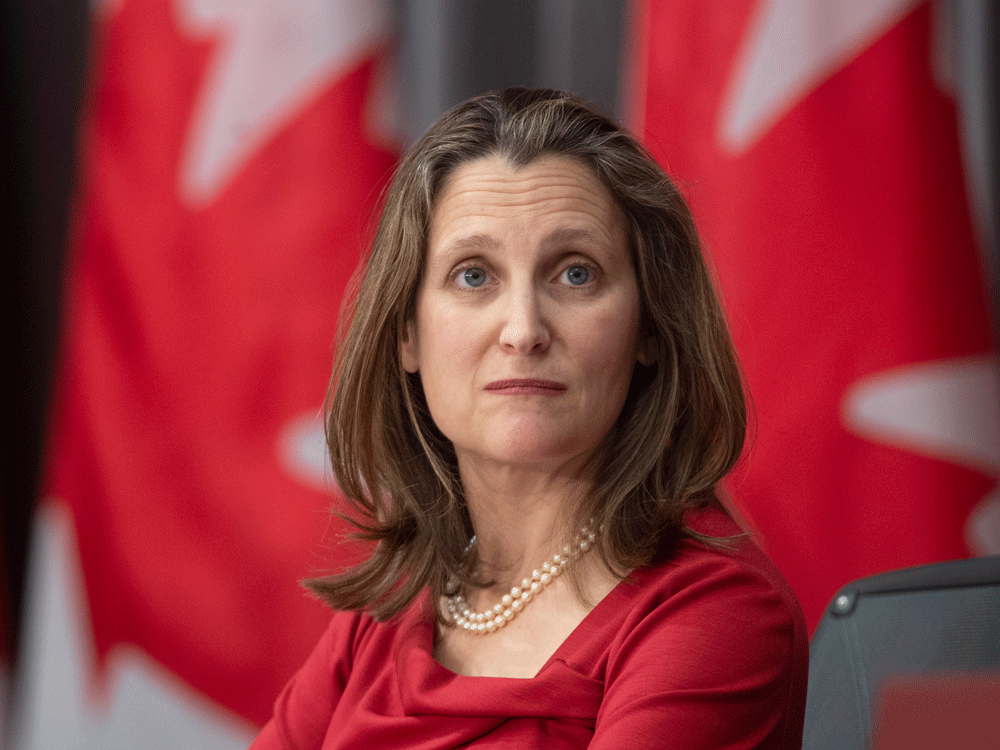 “All Canadians understand that the restart of our economy needs to be green. It also needs to be equitable. It needs to be inclusive. And we need to focus very much on jobs and growth,” Freeland told reporters Wednesday.

Those behind the resource report insist these goals aren’t at odds with their plan.

“Some of the biggest opportunities for reducing emissions … come from the natural resources sector,” said Scott Crockatt of the Business Council of Alberta.

The report notes natural resource industries contributed $236 billion to Canada’s gross domestic product, or 11.3 per cent of the nation’s economy, in the first quarter of 2019.

“We can’t turn our backs on our largest and most valuable export industry,” Energy Minister Sonya Savage said in a statement.

Economist Kent Fellows at the University of Calgary did the number crunching in the report and said the additional growth and jobs could start quickly as policy changes reduce trade costs and increase capital productivity.

Reaching the 2.6 million jobs target would take place over five to 20 years, he added.

However, the resource industry faces barriers and misperceptions, including the idea extracting minerals, harvesting trees or producing oil and gas is an outdated part of Canada’s economy that isn’t needed in the future.

It also ignores investments in technology can lead to environmental improvements.

Keith Stewart, senior energy strategist with Greenpeace Canada, said the report has a few interesting points, such as a recommendation to develop a national hydrogen industry, but most of it leans on previous industry demands, such as tax cuts.

“It’s almost like they’re saying that once COVID is over, it’s going to be back to business as usual,” he said. “They are not really preparing for the resource economy of the future.”

But Canada will need many sectors of the economy to bounce back if we’re to dig out of a deep hole.

The pandemic has led to an unprecedented shock and, as one expert put it, while we should favour a green-based economic restart, we should also be a little nervous if it means handicapping one sector of the economy.

Canada has an integrated economy and we will need the resource sector to play its part in creating new jobs for the future.