When Alberta government officials were building the new provincial budget in early January, oil prices were dancing above US$60 a barrel.

to a Calgary Chamber of Commerce breakfast, benchmark crude prices were bouncing around US$45 a barrel, almost $13 below the oil projections released in his new budget last week.

Timing is everything in politics.

Now, Toews has to convince Albertans and market watchers his new financial plan is not only necessary, but plausible.

“The Friday before budget week, we had experienced a lot of economic turmoil that week with the coronavirus fears … (but) it seemed like things were settling down,” he told the crowd.

“By Monday, everything was going the other direction and so by Thursday, when I was actually presenting the budget, it felt like Rome was burning behind me.”

spread of the coronavirus

. Commodity prices and stock markets have tumbled in recent weeks, until a rebound on Monday.

The S&P/TSX Composite Index jumped more than 290 points on the day, after sliding by nine per cent last week.

In a blog, ATB Financial economists pointed out Monday “the negative economic effects of the coronavirus will be temporary, but are also looking like they will be deep.”

All of these factors make the province’s forecast oil prices for the year, set at $58 a barrel for the upcoming 2020-21 budget year, look particularly vulnerable, a point Toews acknowledged.

“We really believe that given the events of the last week or 10 days, in the upcoming year there is a risk that our $58 may not hold on WTI,” he said.

“Know this: there are a number of other variables that can actually counteract a reduction in WTI (oil).”

It’s not often a finance minister has to say one of his key economic projections may not hold, even before

kicks into place on April 1.

But it happens to be correct.

DBRS Morningstar vice-president Paul LeBane said cutting the provincial deficit over three years seems reasonable, but noted “there is a lot of volatility in the market and who knows what oil is going to end up averaging this year.”

But when the new forecast is so far underwater, it makes for a big target.

On the economic front, concerns about the fallout from the coronavirus have increased in recent days.

Premier Jason Kenney and Energy Minister Sonya Savage had planned to travel to Houston next week for the annual CERAWeek 2020 conference, but the energy gathering was cancelled Sunday due to

As far as the budget is concerned, b

oth the finance minister and premier stressed the government can only control things within its power, such as provincial spending and trying to make Alberta as competitive as possible.

The province needs to attract more business investment and see more jobs created after a miserable 2019.

On Monday, Kenney announced a

to clean up about 1,000 additional oil and gas wells. The loan is expected to create up to 500 direct and indirect jobs in the oilfield services sector. 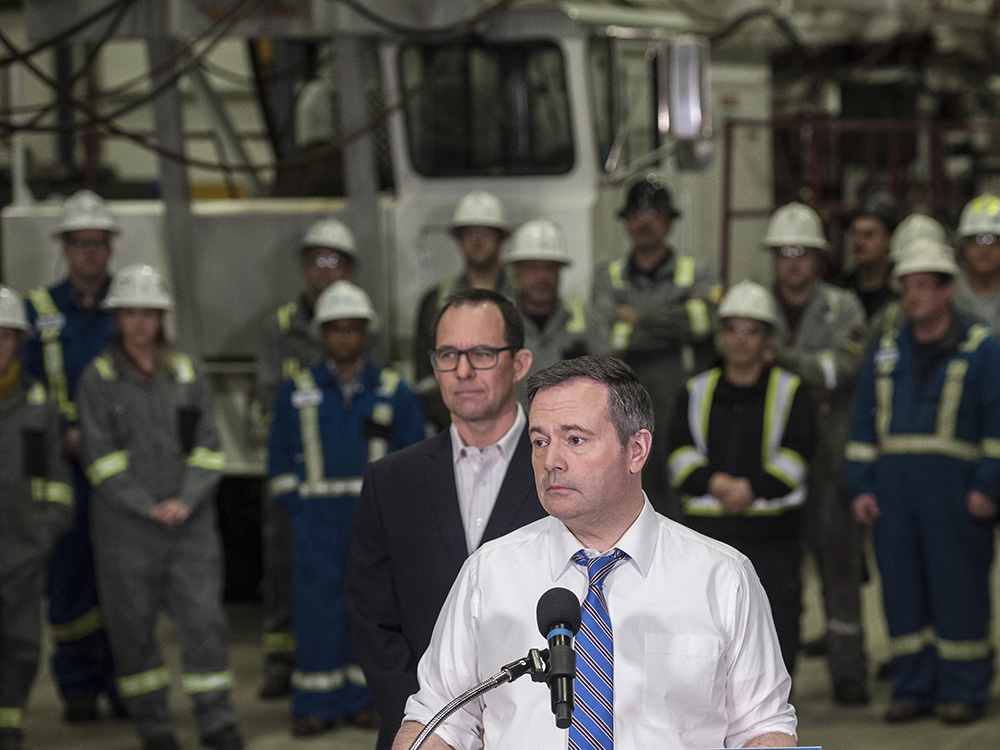 Speaking in Leduc, the premier said the province is facing stiff headwinds with the coronavirus, which could lead to a significant global downturn.

“It’s just one more challenge being thrown at Alberta and all I can say is that’s exactly why we need announcements like today,” Kenney said.

I think we’re doing everything we reasonably can to get this economy moving again and yet we are being sideswiped by global events that are beyond our control.”

A series of new reports from credit rating agencies and banks underscores the risks facing Alberta’s economy, oil prices and the budget.

CIBC Capital Markets said the budget shows Alberta is making progress reducing spending. “However, the recent decline in oil prices is a clear risk should it persist,” it states.

A study by Scotiabank economist Rebekah Young states the government’s medium-term spending constraint was warranted, as the trajectory of provincial debt was on “an unsustainable path following two successful commodity shocks.”

In an interview, Young said Alberta will be disproportionately affected by the economic fallout of the coronavirus, compared to the rest of Canada, because the reverberations will be felt through lower oil prices.

“There is just that big dark cloud on 2020 that struck me when I read the budget. They will definitely be hit by it in the near term,” she said.

And there are still ongoing risks facing pipelines that Alberta needs to get oil to market.

“The main risk is that a lot of things need to align for this budget to work,” added Adam Hardi, an assistant vice-president of Moody’s Investors Service.

“A lot of those factors to align are outside the control of government, the key being a rebound in the energy sector.”

Previous : Trudeau calls for input from industry, citizens, Indigenous groups on climate
Next : ‘Prudent’ Suncor expects to spend next 6 years trying to secure approval of replacement oilsands mine