How should Finance Minister Travis Toews craft a new Alberta budget as geopolitical tensions are rippling through the global economy, inflation is surging and oil prices appear poised to crest above $100 a barrel?

The answer: Very carefully, with a close eye on the downside.

“I wouldn’t ratchet my price expectation up because we are in a very volatile (time) — the higher the price goes, the more volatile things get,” said Peter Tertzakian, deputy director of the ARC Energy Research Institute.

“Forecasting the price of oil is an impossible task in the best of times and now, here we are when the oil market is acutely stressed from the COVID shock and staring down the barrel of a potential conflict in eastern Europe,” added Rory Johnston, market economist at investment firm Price Street.

“It is really anyone’s guess where we go from here and . . . being conservative is important.”

As the Alberta government prepares to release its new budget on Thursday, many analysts are predicting oil prices could soon eclipse US$100 a barrel and head even higher if tensions intensify between Russia and Ukraine.

Russia, one of the world’s largest oil and gas producers, sent troops into eastern Ukraine this week, prompting the U.S. and other countries (including Canada) to announce Tuesday the introduction of the first round of sanctions against it.

It also prompted the International Energy Agency to put out a statement saying it’s “monitoring with growing concern Russia’s recent statements and actions, and their potential implications” for global energy markets.

“At this stage, oil is trading in the fog of war,” said Johnston.

In Alberta, the fog rolls in as the province is set to unveil a budget that could balance the books for the first time since 2014-15.

In an interview, Toews said oil prices trading above $90 a barrel have not affected the budget’s energy price assumptions — set a while ago — or where Alberta is headed with a new financial plan.

“We are not considering $90 or $100 oil. We’re taking, I would characterize it as a credible but cautious approach,” Toews said.

“We have seen a ton of volatility.”

Yet, expectations for higher oil prices are growing and geopolitical strife has captured the attention of markets in recent days. 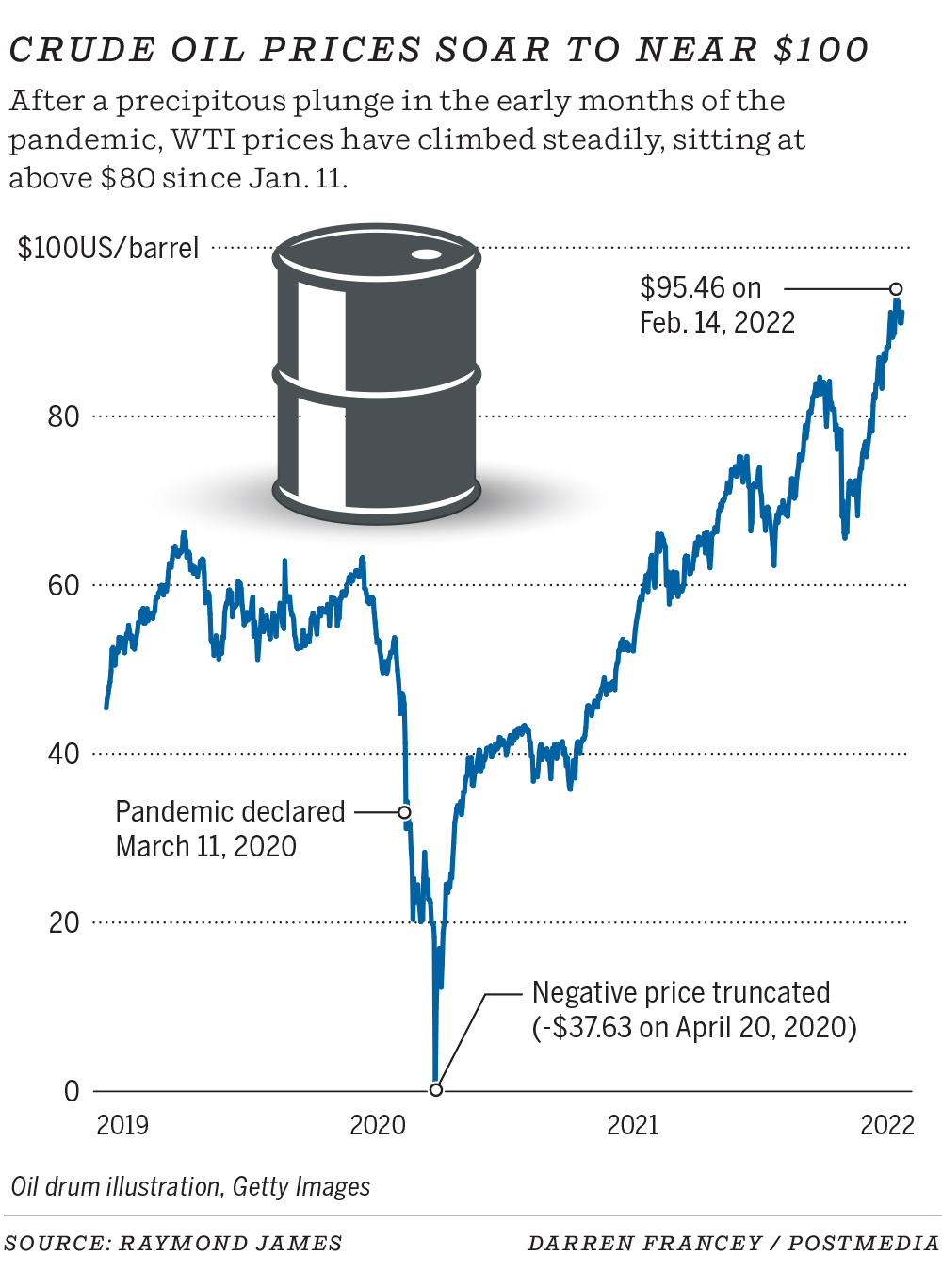 Earlier this month, a note by JP Morgan said any disruption to oil flowing from Russia could easily send crude prices soaring to $120 a barrel. A report by RBC Capital Markets last week said there is “good visibility” for oil prices this summer touching $115 a barrel or higher.

“It just seems like $100 is inevitable,” Al Salazar, vice-president of intelligence at energy analytics firm Enverus, said in an interview.

“Anything higher than that is possible, certainly when you’ve got the threat of western sanctions on potential energy (supplies). It’s really just adding to this inflationary fire that we’ve seen.”

For the Alberta government, oil prices are a huge driver of royalties, revenues and economic activity.

Toews wouldn’t comment on the prospect of a balanced budget, saying progress made during the past three years is “contributing to getting us to a more sustainable fiscal future.”

Inflation is another wild card facing the province, with an interest rate hike expected from the Bank of Canada in the coming months.

The Consumer Price Index in Canada jumped by 5.1 per cent in January, its highest level since 1991, propelled by rising energy and food prices.

“We have to anticipate increasing interest rates and capital costs,” Toews said.

“The best thing governments can do to beneficially and durably deal with inflation . . . is to manage spending — basically spend less, borrow less, tax less.”

When it comes to forecasting energy prices, prudence makes sense, given the experience of two years ago.

In February 2020, the provincial budget forecast oil averaging $58 a barrel for the year, even as WTI prices were mired around $47 and sinking — on the way to plunging briefly into negative territory that spring as the pandemic hit home.

In 2022, oil prices have shot up by more than 20 per cent and the broader question is what effect it will have on economic growth and energy demand.

“Let’s say oil stays at $95 for the next six months. You would never build a budget on that, you would just deliberately keep it conservative because you just don’t know what is going to happen to the downside.”

As oil prices move closer to triple-digit territory, energy analysts are also watching to see if — or when — it spurs more production to come online through increased drilling.

The Canadian industry is on pace to see unprecedented revenues this year approaching $200 billion, Tertzakian noted.

However, most oil and gas companies in North America are focused on capital discipline, not opening the taps to bring on additional output.

“All of a sudden, geopolitics are back and independent oil companies are not responding to price signals to increase production,” said Tertzakian.

“And that’s where we’re at today.”

Previous : U.S. sanctions on Russia not likely to disrupt energy markets
Next : Oil heading higher as Ukraine tensions escalate; price depends on what happens next