Diversification will help gird Calgary against volatile energy markets, yet one thing is still clear in 2022: rising oil and natural gas prices will turbocharge growth in the economy.

However, it’s not fuelling a massive job bonanza, yet.

Propelled by soaring commodity prices, the Calgary region will lead the country’s 13 largest cities in economic growth in 2022 and in the following three-year period, says a new forecast by the Conference Board of Canada.

“Stronger oil prices remain great news for this city, whose name is virtually synonymous with the mineral fuel,” says the report released Thursday.

Energy markets are blistering this year, with benchmark U.S. crude prices closing at US$108.26 a barrel on Thursday. U.S. natural gas futures climbed to an eye-popping US$8.78 per million British thermal units, reaching their highest point in 13 years.

Several key components of the city’s $131-billion economy are moving in the right direction, with more construction activity and a booming market for homes, while the technology sector is raising record amounts of venture capital and creating jobs.

Yet, you can’t underestimate the effect of soaring commodity prices on overall economic growth when the primary and utilities sector — which includes agriculture, mining, and oil and gas — accounts for 29 per cent of the city’s gross domestic product, said board senior economist Robin Wiebe.

“It’s hard to beat oil prices when it comes to Alberta,” he said.

“Stronger resource markets led by oil are the key to it all. That’s the main reason we think Calgary will do so well.”

The local economy was pummelled in 2020 by a collapse in global energy demand and the pandemic. It partially recovered last year as more businesses reopened, jobs came back and oil prices began to edge up, ending the year at $75 a barrel. 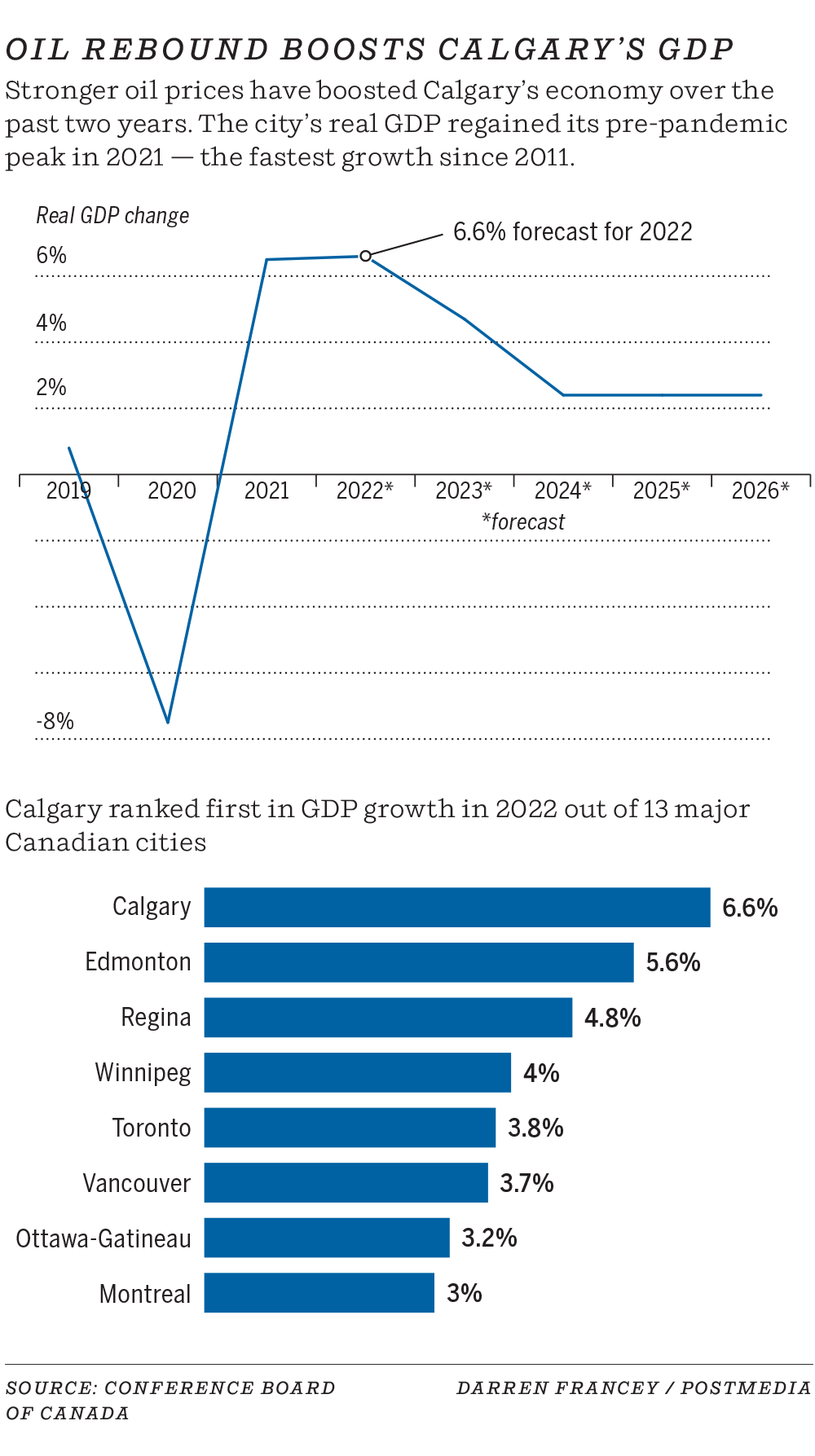 Yet, the city’s unemployment rate remains high, sitting at 7.7 per cent in March, as some sectors side-swiped during the pandemic are still struggling.

The study forecasts the jobless rate will average 7.5 per cent this year before slowly dropping to 6.8 per cent by 2026. Yet, overall employment in the Calgary region is expected to grow by 37,000 jobs in 2022.

Energy prices have skyrocketed with increased demand and the invasion of Ukraine by Russia, the world’s largest oil and gas exporter.

The financial turnaround in the oilpatch can be seen in a series of stellar first-quarter results that have rolled out of the city’s largest energy companies in the past few weeks.

While revenues are rising rapidly, additional spending that would power new production — and jobs — has been much slower to return as companies focus on maintaining financial discipline and returning money to investors.

“The truth is the strong commodity prices and return to profitability of our energy companies is great, but it’s not driving huge employment gains yet,” he said in an interview.

“I’m not expecting to see massive employment growth in Calgary from the renewed strength of oil and gas — where I think we’re going see most of the job growth and turnaround in the commercial real estate market is through new industries that are really hitting their stride.”

Many petroleum producers are operating with smaller workforces than in the past due to technology and efficiency gains, while industry consolidation has continued over the past two years.

Alberta Central chief economist Charles St-Arnaud pointed out the value of oil production in the province reached a new high of $14 billion in March, well above the 2014 peak. Yet, resource sector employment (including energy) in the Calgary region has fallen by 17 per cent in that time.

Across the entire province, support activity jobs for oil and gas extraction are still slightly below where they were before the pandemic — at just under 42,000 positions in February, down from 71,000 in 2014, said University of Calgary economist Trevor Tombe.

“The biggest effect of the oil-price increase is really just in corporate profits and the government budget. It has not clearly manifested itself in terms of increased employment,” said Tombe.

While a huge upswing in industry employment isn’t expected immediately, Kenney believes the effect of higher prices will filter through the economy with rising wages as Alberta moves into a tighter labour market.

“It would be incredibly wrong to write off energy. It is our largest, it’s Canada’s largest, industry,” Kenney added.

“A rising tide lifts all boats, and a profitable oil and gas sector will be reflected broadly in the economy. But like I say, I don’t think we’re going to see massive new employment coming out of oil and gas in the short term.

“I do think if this commodity price run carries on, that inevitably there will be more investment in exploration and production.”