There are so many economic risks facing the province these days it feels like Albertans have been dropped into a minefield wearing a blindfold.

Each step comes with trepidation.

Unemployment is high. Investment is low. Oil prices are weak and COVID-19 cases are growing.

The pandemic has disrupted key segments of the economy, such as tourism and the hospitality industry, and forced rapid digital transformation on many companies.

However, there are signs some businesses are innovating, finding ways to grow, taking bold risks to uncover new rewards.

Consider the case of Exergy Solutions.

The Calgary-based company hosted a news conference Thursday for the provincial government, an event designed to highlight

and its plan to modernize intellectual property laws.

has its roots firmly planted in the energy sector.

Founder and CEO Billy Rideout is a chemical engineer who worked for Suncor Energy for 17 years after moving to the province from New Brunswick.

A big chunk of the small company’s work, about 70 per cent, is tied to the energy sector.

Yet, there it was in June, completing a project to use 3D printing technology to create 200 ventilators, which were donated to Alberta Health Services to help hospitals deal with an expected surge of patients during the pandemic.

“It was something that society needed and in the span of about three months, we went from nothing to designing a ventilator. And this is something we’ve never done before,” Rideout told reporters.

“Innovation requires people to be bold . . . take risks, fail fast and fail cheap, and look at what society needs.”

The project required assistance from other players and companies — Suncor funded the development — but they pulled together with a single aim, obtaining Health Canada approval and fabricating the machines in a matter of weeks, not years.

That same kind of attitude is required on a larger scale, to take risks and embrace innovation, as Alberta strives to pull out of a deep economic recession.

“There is a pioneering spirit in the province. It’s right in our DNA,” Rideout said in an interview.

“We just need to put these things in the forefront and start trying.” 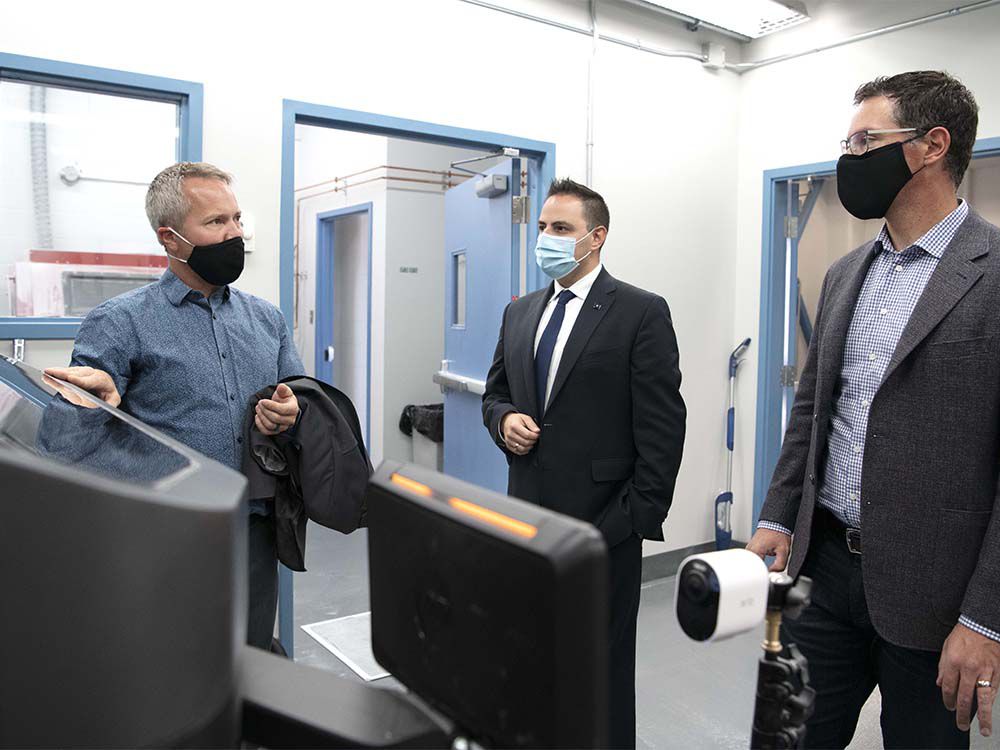 Since Rideout founded the company with his wife about six years ago, Exergy has been growing and now has a lab at the Life Sciences Innovation Hub at the University of Calgary.

The company has doubled its revenues in each of the past three years.

Two years ago, it had 10 workers; now, it has 35. Rideout expects to eclipse $10 million in revenues shortly and hopes to eventually grow his company to 150 workers.

He noted Exergy is also working on projects to help eliminate tailings ponds in the oilsands and reduce greenhouse gas emissions.

The point here is that for all the many reasons to be concerned about the province’s economic future, there are reasons for confidence, such as the talent available across Alberta.

“The challenge is, it’s a long road.”

At Thursday’s news conference, embracing the technology sector was a constant refrain by Doug Schweitzer, the minister in charge of jobs, economy and innovation, and his cabinet colleagues.

It was only a year ago the UCP government didn’t seem all that interested in the tech sector,

to grow the industry.

, recently putting $175 million into the Alberta Enterprise Corp. to expand access for startup firms to venture capital, and creating the Innovation Employment Grant, which will be available to smaller companies that invest in R&D.

But the government shouldn’t think its work is done; that’d be like congratulating the arsonist after they’ve put out the fire.

Schweitzer, who took on the new cabinet role last month, has been meeting with technology sector leaders this week to hear directly from the industry.

“We are seen by some — this is just feedback we’re seeing — that we haven’t been as welcoming as we could,” he said.

Listening with purpose, not dictating, will be key to moving forward.

Sandi Gilbert, managing director of Calgary-based private venture fund InterGen and chair of the National Angel Capital Organization, said the story of Exergy making ventilators is a perfect example of a company pivoting, using its skills, talent and agility to meet a pressing need.

But there is more work to be done by industry and government to build the innovation ecosystem in Alberta.

“I am feeling the momentum. I am feeling quite excited about the opportunities ahead,” Gilbert said.

“(But) if you look at what is being spent in other provinces around digital transformation or the innovation economy, we have a big gap.”

Aside from pandemic-related concerns, there are other economic challenges to overcome, and attracting capital and creating jobs remain at the top of the list.

There are also opportunities for the bold.

“Sometimes we overthink what is needed,” said Rideout. “You see an opportunity, you work on it. And it will blossom into something.”