Albertans are used to waiting for new pipelines to be built.

But waiting for Ottawa to find a solution to anti-pipeline blockades is creating more anxiety for Alberta businesses and the Kenney government.

this week as his government strives to resolve protests against the Coastal GasLink pipeline project that have stopped rail shipments and led to layoffs in parts of the country.

“Our members, our farmers, rely completely on this rail network. We can’t pipeline our grain,” said Scott Bolton, CEO of the United Farmers of Alberta Co-operative, which has 110,000 members across the province.

“This situation just can’t go on much longer and it needs to be resolved. It’s as simple as that.”

His comments come as the economic toll is escalating, with rail lines in parts of the country being pinched by the blockades. The protests were set up in support of some hereditary chiefs of the Wet’suwet’en Nation in British Columbia who oppose the Coastal GasLink development in that province.

Via Rail announced Wednesday it will

because of service interruptions. The head of the Canadian Manufacturers & Exporters has estimated for every day the blockades continue, about $425 million worth of manufactured goods moved by rail sits idle.

Alberta Chambers of Commerce president Ken Kobly, one of 34 business leaders who signed a letter Tuesday to the prime minister calling for Ottawa to “work urgently” on a resolution, doesn’t think the federal government has taken the economic effect of the situation seriously enough.

He pointed out ships are waiting at the Port of Vancouver, and products such as propane and chlorine aren’t getting to customers.

“We need to come to a peaceful solution, but we also need some sort of reassurance from the government of Canada: What is the timeline here?” he asked.

A chorus of business groups and provincial premiers pressed the federal government Wednesday to do more to resolve the blockades that have sprung up around the country.

, although it was torn down by counter-protesters before a Court of Queen’s Bench justice issued a 30-day provincewide injunction against the protesters in the afternoon. 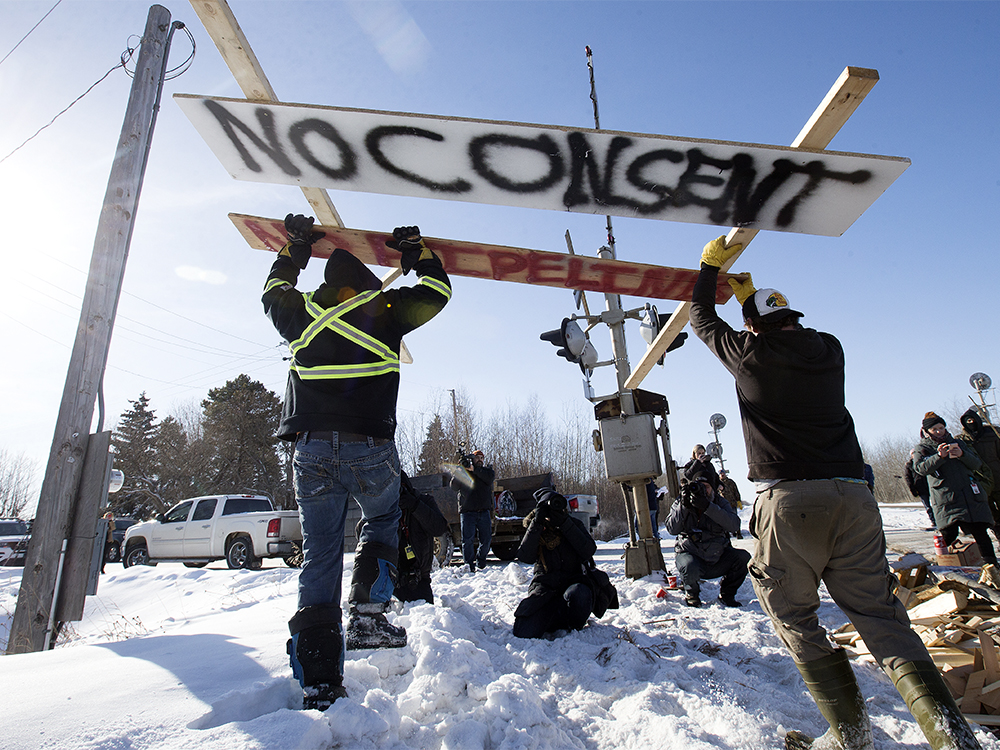 Speaking earlier in the day, Premier Jason Kenney said in cases where judges issue injunctions to stop illegal blockades, “it’s the job of the police to enforce those injunctions.”

He also blasted the Trudeau government, saying he was perplexed by a lack of national leadership on the issue.

“What is happening here is anarchy, extended illegal protests contrary to the orders of the courts that are shutting down large parts of the Canadian economy,” he told reporters in Calgary.

In Quebec City, Premier Francois Legault said he wants to see Ottawa set a deadline to end the blockades.

The frustration level is rising and the longer the situation remains unresolved, the more it will grow.

found 39 per cent of Canadians surveyed believe the protesters are conducting justified and legitimate protests by shutting down rail lines and roads, but 61 per cent disagree.

The online poll of 1,301 people for Global News, conducted between Feb. 14 and 17, found 53 per cent of those surveyed support police intervention to end the blockades of key transportation corridors, while 28 per cent oppose such action.

Dan Kelly, CEO of the Canadian Federation of Independent Business, wrote a letter Wednesday to the prime minister, urging Ottawa to work with the provinces and police to ensure rail service is immediately resumed.

He noted one unnamed manufacturing member in Alberta uses steel that is shipped by rail, and if the blockades aren’t lifted, “the business owner told us that he can last only 30 days before being forced to lay off almost 400 employees.”

“The business community is certainly ramping up the pressure on (the federal government) but we’re under no illusion . . . that there’s an easy solution here,” he said in an interview.

Other business groups say there needs to be progress and urged a collaborative approach.

“I don’t think dialogue alone will get us there. There needs to be some action. Dialogue is a tactic; it’s not a strategy,” said Adam Legge, president of the Business Council of Alberta.

“We’d like to see some more action, but we don’t think use of force is appropriate action.”

For companies affected by the situation, the lack of clarity is complicating an already uncertain situation.

“It is impacting my business because it is not arriving and people are getting nervous. I used to think I was always doing the right thing by (selling) all made-in-Canada products,” she said.

“I am not blaming anyone in particular, I am just saying my business is at risk.”