LETHBRIDGE — The winds of change are pushing Mark Kokas in a new career direction.

Nearly two years after being laid off as an electrician in Alberta’s flailing oil and gas sector, the 42-year-old is training to become a wind turbine technician.

“It is tough to find work right now. It’s not like it was before,” said Kokas in a class at Lethbridge College, one of two institutions in Western Canada that offers training and the only one with a one-year certificate program.

“Oil and gas used to be our bread and butter, but it isn’t any more. There’s going to be a really hard push now to get people trained where the industry wants them to be,” he said.

“It’s been an eye-opener going into a different industry. There’s more than oil and gas. It’s pretty cool.”

The one-year course to become a wind turbine technician comes with a warning label on the college website: “Those afraid of heights need not apply.”

“Most don’t have a warning label. We do. Our students end up working in an office 300 feet in the air, so obviously safety is a big priority,” said instructor Chris DeLisle.

“We need to make sure you’re not scared of heights.”

Inside the training tower used in the Lethbridge College Wind Turbine Technician program.

DeLisle said that with the downturn in the oil and gas sector, alternative energy sources such as wind are a natural fit for many who are laid off. About four out of the 16 people in his class have worked in the oil sector in some capacity, he said.

“With Alberta looking to kind of lead the rest of the country now into renewable energy, wind is … at the forefront, so it’s going to be around for a while.”

Wind power is eliciting optimism at a time when Canada is trying to reduce its carbon footprint.

With their giant 80-metre-high turbines stretching as far as the eye can see and 45-metre-long blades turning gracefully in the breeze, wind farms in areas including southern Alberta are becoming more common. 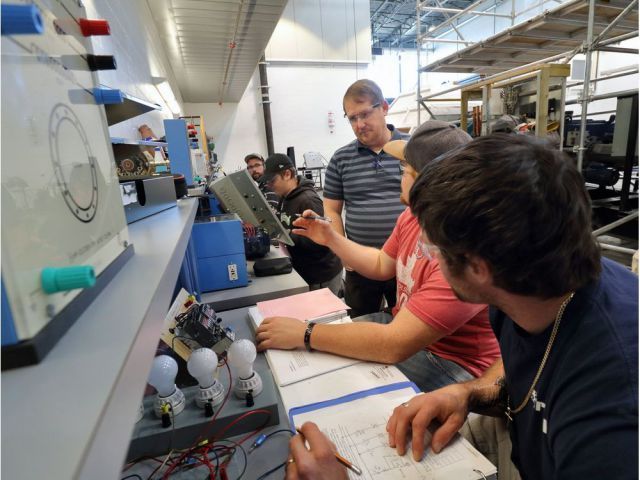 Instructor Colin Winder leads a class at Lethbridge College, the only college in Western Canada that offers a one-year certificate as a wind turbine technician.

The Canadian Wind Energy Association estimates that if Alberta were to use wind energy to fulfil a commitment to add 5,000 megawatts of renewable energy by 2030, it would generate $8.3 billion in investment along with employment.

“I only wish I was laid off earlier, so I could have started earlier and I could already be working,” said Kokas. “There shouldn’t be an issue of getting a job at the end of this class.”

DeLisle said the course includes a lot of electrical training, as well as how to repair fibreglass windmill blades and learning the inner workings of the turbine itself. 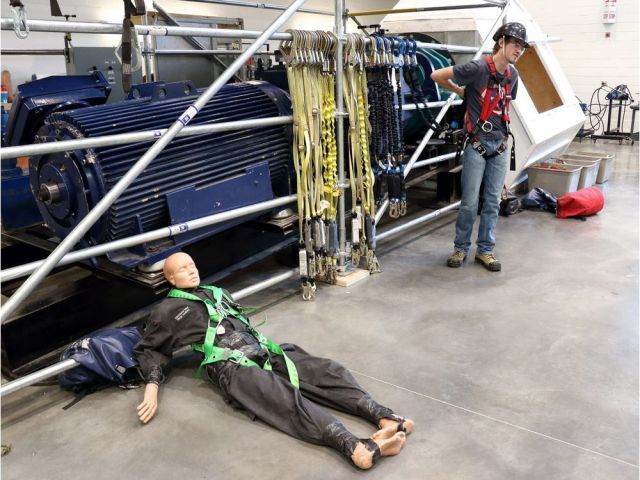 Student Ryan Hanna checks his harness during a safety class.

“Yeah, that’s one of our former students that didn’t make it through the program,” he said with a laugh.

“We use him for all the different rescue scenarios. If somebody was to get hurt inside the hub, they need to bring them out and bring them to the ground. It’s a mock-up for rescues.” 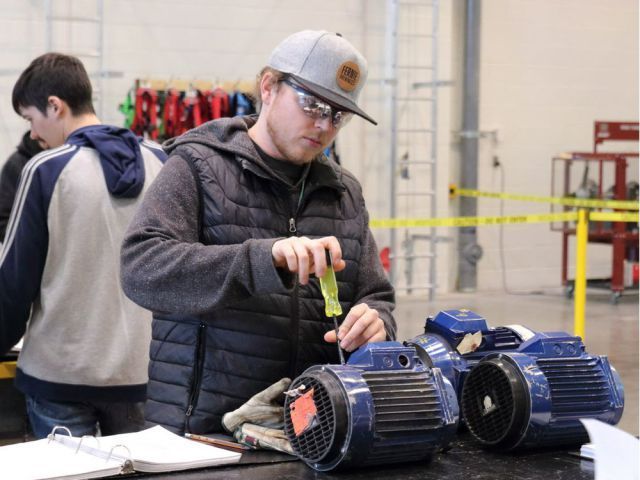 Student Ian Page works on a project during a class at the Lethbridge College Wind Turbine Technician program.

Oscar Diaz-Kennedy has spent the last few years landscaping and working on construction projects. At 24, he said he can see which way the wind is blowing.

“I’ve just seen how the world is going and how Alberta is changing from oilfields going to renewable energy,” Diaz-Kennedy said.

“I decided I wanted to be ahead of the loop a little bit.”

Previous : BioAmber announces record revenues for the second quarter 2017 and purchase of Mitsui equity stake in Sarnia Joint Venture
Next : Korea-owned company says it will fire up halted project after two years on hold