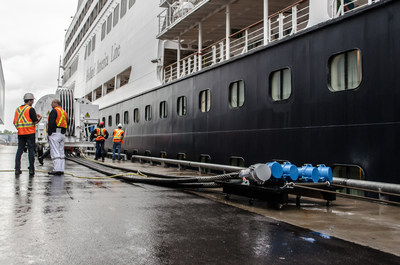 MISSISSAUGA, ON, Aug. 14, 2017 /CNW/ – Schneider Electric Canada, a world leader in shore power technology, has announced the Port of Montreal Shore Power solution for the new Alexandra Pier is now successfully commissioned. On Saturday, August 12, the Holland America Cruise Ship Veendam shut down her diesel engines after docking at the new Alexandra Cruise Terminal in Old Montreal.  The ship was connected to the electrical power grid to provide the necessary power to the ship while in port.  In doing this, all air pollution caused by the ship’s diesel engines was effectively eliminated.

The total cost of the project is $11 million with funding coming from the federal government, the provincial government as well as the Montreal Port Authority. The commissioning procedure was executed flawlessly.”Working in concert with our various partners and improving air and water quality are among the MPA’s main guidelines for sustainable development. Now completed, this shore power project will result in a significant reduction in greenhouse gas (GHG) emissions, offsetting virtually all the GHG emissions for which the MPA is responsible,” said Sylvie Vachon, President and CEO of the MPA.

Schneider Electric commited to sustainability at COP22 Marrakech as an official partner.  Schneider Electric is fully committed to fighting climate change and is proud to be a key actor in the Port of Montreal shore power project.  Creating a sustainable future is key to Canada’s economic well being.  Providing green solutions that help contribute toward the reduction of green house gas emissions is just one of the ways that Schneider Electric is helping Canada create a sustainable future.  Juan Macias, President of Schneider Electric Canada said: “The Montreal Port Authority has demonstrated environmental leadership through the implementation of shore power at the new Alexandra Cruise Terminal in Old Montreal. With the support of the Federal Government and the Quebec Government, the Montreal Port Authority can be proud of this innovative and sustainable solution that reduces greenhouse gas emissions and improves the quality of life for port communities and the world at large.”

The Montreal Port Authority estimates that the shore power project will eliminate upwards of 2,800 tonnes of green house gases annually. This is comparable to reducing the distance driven by passenger vehicles by over 10,000,000 kilometres or replacing upwards of 100,000 incandescent light bulbs with LEDs, according to the Greenhouse Gas Equivalencies Calculator.

Schneider Electric is a world leader in shore power solutions, with over 50 deployments in North America alone. The Port of Montreal shore power solution represents the first cruise terminal deployment in Canada for Schneider Electric and is a significant demonstration of its capabilities to design and build a sophisticated solution incorporating international standards that enforce safety and interoperability for ships calling on the Port of Montreal.

About the Port of Montreal
Operated by the Montreal Port Authority (MPA), the Port of Montreal is the second largest port in Canada and a diversified transshipment centre that handles all types of goods: containerized and non-containerized cargo, liquid bulk and dry bulk. It is a leading container port served by the largest container shipping lines in the world. The Port of Montreal has its own rail network directly dockside. It is connected to the two national rail networks and a highway system. The Port operates a passenger terminal. All other terminals are run by private stevedoring firms. Port activity supports 16,000 jobs and generates $2.1 billion in economic benefits annually.

About Schneider Electric
Schneider Electric is the global specialist in energy management and automation. With revenues of US$26 billion (~€25 billion euros) in FY2016, our 144,000 employees serve customers in over 100 countries, helping them to manage their energy and process in ways that are safe, reliable, efficient and sustainable. From the simplest of switches to complex operational systems, our technology, software and services improve the way our customers manage and automate their operations. Our connected technologies reshape industries, transform cities and enrich lives. At Schneider Electric, we call this Life Is On
www.schneider-electric.ca