After years of heated political battles over the oilsands, a question looms — are passions cooling for a more peaceful future?

In the last decade, the oilsands have landed in the crosshairs of environmentalists who have taken aim at Alberta over the province’s high greenhouse gas emissions and tried to block pipeline projects intended to open new markets for its bitumen resource.

Political division over the oilsands has flared particularly in British Columbia, where the new NDP government is trying to stop the already-approved expansion of Kinder Morgan’s Trans Mountain pipeline — much to the chagrin of Alberta’s New Democratic government.

After taking office in 2015, her NDP government introduced an ambitious climate change plan that includes a broad-based carbon tax, a revamp and increase to the existing carbon levy on large emitters such as the oilsands and, notably, an emissions cap for the oilsands — which allows greenhouse gas emissions to grow from their current level of about 70 megatonnes but sees the province commit to keeping them under 100 megatonnes.

“The reality is that the campaign against the oilsands has shifted and it’s nowhere nearly as intense as it once was. And environmentalists understand, many of them, that we have made great strides in the last few years,” said the premier.

Notley said the issue around pipelines has become marine safety and tanker traffic, not the oilsands’ carbon footprint.

“We don’t see the opposition in B.C. as being anti-oilsands anymore,” she said.

However, Mount Royal University political analyst David Taras noted that even if you take climate change out of the equation, the pipelines in question face opposition because they are shipping what is perceived to be dangerous, “dirty oil.”

“The whole thing could just blow up into a crisis … it’s just waiting for the final match to light up the kindling.”

The situation is also playing out around TransCanada Corp.’s proposed Energy East pipeline to the Atlantic coast, which faces opposition from mayors and environmentalists in Quebec. The National Energy Board’s recent decision to consider indirect greenhouse gas emissions in its review of the pipeline project angered industry and Notley’s government.

Taras said the Alberta NDP has little to show so far from its strategy around oilsands and pipelines, but the politics are “fascinating” as Notley is pitted against her comrades in the B.C. NDP and the federal party. She is allied with the federal Liberals when it comes to Kinder Morgan, but on Energy East the Trudeau government’s intentions are murkier.

As an opposition politician, Notley was a fierce critic of the Progressive Conservative government’s stewardship of the oilsands, decrying the “Third World environmental regulation system” in place. The NDP also for years demanded a greater economic take from the oilsands through a revamped royalty system.

But Taras said that by default, Alberta’s premier must be a champion of the resource, given its economic importance to the province.

The oilsands, still in their commercial infancy, were a footnote in the conflict between Peter Lougheed and Pierre Trudeau over the National Energy Program, though the reviled federal program impacted pricing on oilsands production.

It was co-operation between the federal Liberals and Alberta’s PCs that helped spur the development boom in the oilsands in the 1990s and early 2000s.

But Jean Chretien’s move to sign Canada on to the Kyoto Protocol drew the wrath of Ralph Klein, who warned that the international deal to reduce greenhouse gas emissions would harm the oilsands.

“The commitment (Canada) ended up signing on to was unrealistic from the outset,” said Gary Mar, who served as Klein’s environment minister during part of the Kyoto debate. 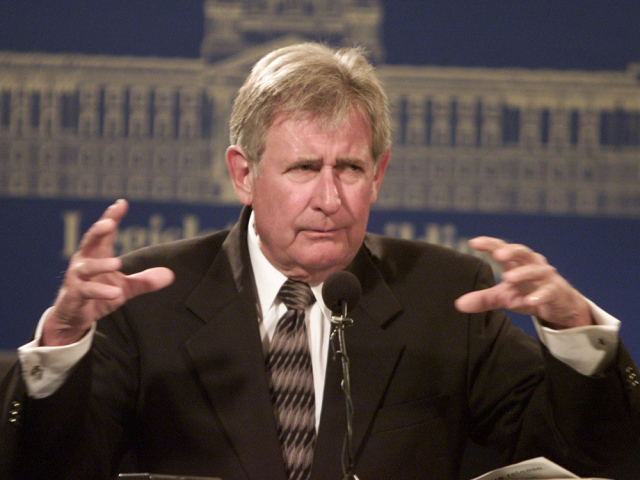 While the federal Conservative government elected in 2006 withdrew Canada from Kyoto and was staunchly pro-oilsands development, the oilsands were increasingly found in an unflattering spotlight both within the country and internationally — fuelling opposition to the proposed Keystone XL pipeline to the United States Gulf Coast.

The Stelmach government responded by implementing a $15-a-tonne carbon levy on large emitters, massively investing in carbon capture and storage and launching a public relations campaign that stressed the economic importance of the oilsands and the province’s efforts to reduce their environmental impact. 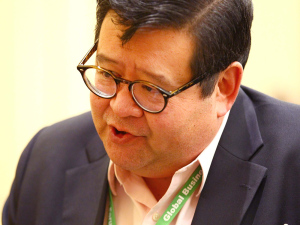 Gary Mar talks to media at the 2017 Global Business Forum.

Mar, who served as Alberta’s envoy to Washington, D.C., under Stelmach, believes the province should have been even more aggressive in combating environmentalists in defence of the oilsands.

“We didn’t do enough, fast enough,” he said. “We should have been bloodying peoples’ noses when they’re telling untruths about the oilsands.”

With the oilsands likely to remain at the centre of political debate in the province, some are calling for a harder line on the issue.

The new United Conservative Party, the NDP’s likely main rival in the 2019 election, says Notley’s policies are responsible for the exodus of foreign players from the oilsands and have cooled both development and the provincial economy.

Candidates for the party’s leadership have called for the repeal of the NDP’s climate change initiatives and a bellicose approach toward provincial and federal governments when it comes to pipelines and carbon pricing.

“Putting our industry at a competitive disadvantage and not having a significant impact on global emissions is not the best path forward,” said UCP interim leader Nathan Cooper.

But Notley said that approach would be counterproductive — and leave Alberta at the mercy of a federal government determined to address climate change.

She said the future viability of the oilsands and the fate of needed pipelines hinge on taking appropriate action, a lesson she feels wasn’t learned by previous governments,

“To not be honest about the environmental challenges associated with the oilsands resource … they undermined our industry and they undermined key things that needed to happen,” she said.