Painting a dire economic picture for the province on Wednesday, Premier Jason Kenney urged the rest of Canada to step up for Alberta as he left for Ottawa to meet with fellow premiers.

Kenney noted economic aid doled out to industries such as the auto sector during the recession a dozen years ago, and insisted Alberta needs similar relief as it spirals into another deep fiscal hole as a result of the

“Albertans expect at least that kind of help for an industry that’s done more than any other to create jobs, wealth, opportunity and government revenue for social programs — that is the energy industry,” Kenney said at the Calgary International Airport before departing for Ottawa and a first ministers conference Thursday and Friday.

A price war instigated by “two unfriendly regimes” in

also seeks to torpedo North American energy producers, said Kenney, and must be parried by aid from Ottawa in the form of flow-through shares to accelerate cleaner oilfield technology and remediate abandoned wells in Alberta.

$100 million in loans for energy firms

to clean up out-of-service wells.

Alberta has had Canada’s back.

Now its time for Canada to have Alberta’s back. pic.twitter.com/cGhWubbC0R

On Wednesday, West Texas Intermediate fell by US$1.38 to close at US$32.98 a barrel, nearly 24 per cent below its value a week ago.

The price for Western Canadian Select closed at US$20.90 a barrel, according to Net Energy.

Kenney said if that differential widened into the mid teens, it would be a “complete disaster” for the local industry.

In response, regulations such as those tamping down methane greenhouse gas emissions must also be relaxed to lend relief to a beleaguered energy sector whose oilfield workers are bound to feel the bite of more layoffs as they head home in the early spring, said the premier.

He also reiterated his demand for the release of $2.4 billion he said is owed to Alberta from a fiscal stabilization fund for provinces feeling the pinch of plunging revenues.

“These are the messages I will be taking with a sense of urgency to Ottawa today,” said Kenney, adding the first ministers meeting will be refocused toward the latest pressing realities.

“This is not asking for a favour.”

He noted Ottawa’s just-announced $1-billion aid package to help employers and Canadians struck by the effect of COVID-19 on a day the WHO declared the spread of the virus to be a global pandemic. 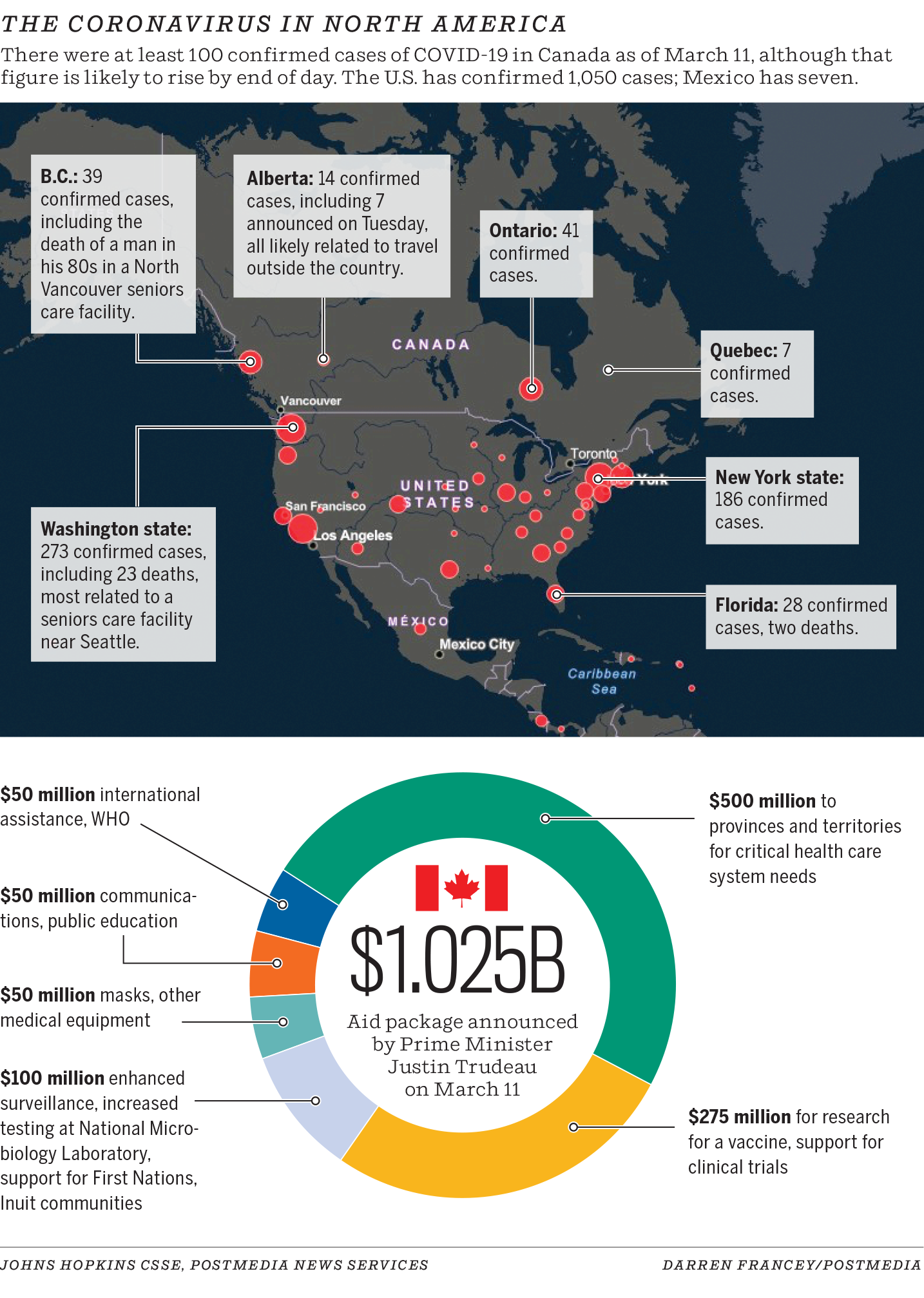 Kenney said he hadn’t yet seen the details but demanded immediate loosening of employment insurance rules to help those affected by the virus.

“We don’t want anybody to feel they have to go to work to make a paycheque if they are not healthy,” he said.

But his main message was for Ottawa to assist an oil and gas industry, some of whose players are approaching a tipping point after five years of fragility.

“Energy companies . . . are massively cutting their capital budgets for 2020, this is going to have a very negative effect on working men and women in the energy services sector, which in so many ways together with agriculture are the heart of the rural Alberta economy,” he said.

And he accused Ottawa of taking its eye off of what urgently matters to Canadians and particularly Albertans.

“Enough with dealing with every fashionable issue out there, the virtue signalling, the UN Security Council and all the rest . . . we need total focus on economic issues,” he said.

“We’ve had Canada’s back, we need the government of Canada to have our back.”

Asked if other Canadian leaders whose provinces have sales taxes might suggest that Alberta follow their example to stabilize its rocky revenues, Kenney said he doesn’t expect to hear such a message he called wildly untimely.

“I just get a strong sense of solidarity around the table for the people of Alberta,” said Kenney, adding a new PST would “further hammer” an already vulnerable economy.

But he said the reaction to Alberta’s fiscal requests to Ottawa has been underwhelming since last spring and confined to “nice conversations . . . my message is we’re running out of time here.”

Previous : Race to Curb Virus After Case at Canadian Mining Forum That Drew 23,000
Next : After 50 years of trying to diversify its economy, Alberta is still stuck on oil