CALGARY – After failing to secure Western Canadian oil via the scrapped West-to-East Energy East pipeline back in 2017, Irving Oil Ltd.’s finally been able to get federal approval for a new route to connect the oilsands to its refinery on the East Coast.

But this time it will circumvent provincial and environmental opposition faced during efforts to build that pipeline, as the oil will be shipped on foreign tankers from British Columbia to its refinery in Saint John, New Brunswick, via the Panama Canal.

Irving spokesperson Candice MacLean told the Financial Post the company had received approval from the federal government for “sourcing additional Canadian crude for our refining operations.”

“From Western Canada to offshore Newfoundland, we’re expanding our reach as we continue to pursue solutions that help create energy security for our country,” she said in an email.

Irving had filed an application to the Canadian Transportation Agency on April 16, requesting permission to use the roundabout route “on an urgent basis.”

The company was already in discussions “for prompt acquisition” of Canadian oil “for immediate delivery to its refinery through the Panama Canal,” via medium-sized crude tankers known as Aframax.

“It is critical to our customers, to our business, and to energy security throughout Atlantic Canada that we are able to use foreign crude oil tankers to access Western Canadian crude oil on an urgent basis and going forward for one year to allow for effective and flexible supply chain planning and to strengthen the link between Canadian oil producers and our refinery in this challenging and uncertain time,” Irving chief refining and supply officer Kevin Scott wrote in the application.

Irving Oil was an early backer of the $15.7-billion Energy East project that was proposed by TransCanada Corp. in 2014 to connect oilsands to the East Coast. 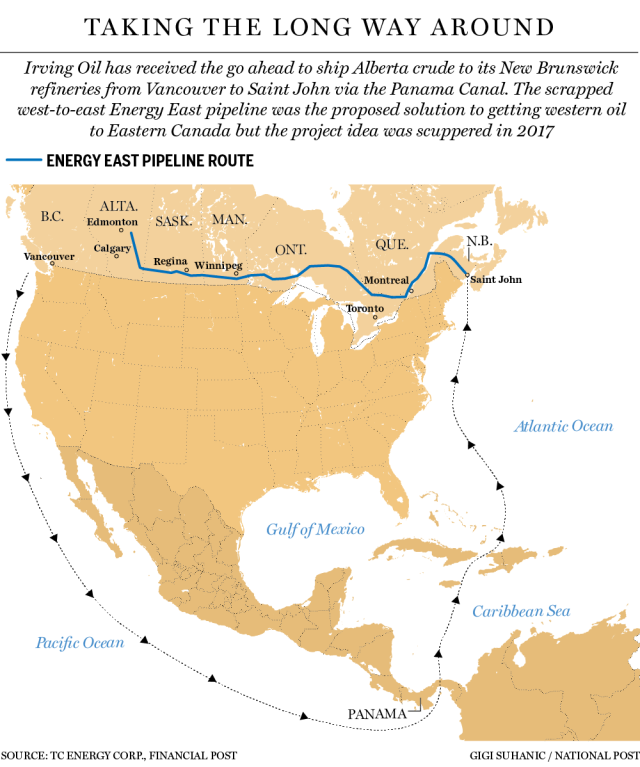 Irving had committed to build a new $300-million terminal at its Canaport facility in Saint John to take shipments from the proposed pipeline. But TransCanada — now known as TC Energy Corp. — shelved the project in 2017 amid opposition from Quebec and Ontario governments and entrenched opposition from some environmental groups and local communities.

Irving’s new solution to access the oil will purportedly see Western Canadian oil travel 6,300 nautical miles, or 11,771 kilometres, according to Sea-distances.org, more than twice the length of the abandoned 4,600-kilometre Energy East pipeline.

Irving Oil is also looking to source Canadian oil delivered through ports in Texas and Louisiana.

“Further, Canadian oil is also available from Canadian crude producers at Gulf Coast terminals in the United States,” Scott wrote in the application. “To maintain flexibility with crude suppliers, Irving Oil needs to have the option to acquire Canadian oil both in British Columbia and the Gulf Coast.”

Some analysts believe the West Coast and the U.S. Gulf Coast could become a longer-term option for Irving, which has the ability to process a large variety of light and heavy crudes at its Saint John refinery, Canada’s largest oil refinery with a capacity to process 320,000 barrels per day.

Irving’s circuitous route is seen as a novel way to get around regulatory logjams in Canada that have stalled a number of pipelines.

“We never looked at this pathway,” said Dinara Millington, vice-president research at the Canadian Energy Research Institute, who has studied the subject extensively.

Millington said the federally owned Trans Mountain pipeline expansion and TC Energy-backed Keystone XL projects will boost Canadian oil shipments to both B.C. and the U.S. Gulf Coast, “so if Irving can secure those ships for longer-term, yeah, it just has to be economic at the refinery gate.”

Pricing dynamics between heavy oil benchmark Western Canadian Select, West Texas Intermediate and Brent crude oil benchmarks could also lead Irving to source more WCS over the long term. The WCS benchmark was up 7 per cent to US$15.06 per barrel in midday trading Monday, trading at nearly a US$5 discount to WTI.

“You’d always have heavy sour crudes at a discount to WTI or Brent, so that in itself might make an economic case for Irving,” Millington said.

Irving would not say directly whether the move to bring Western Canadian oil to the East Coast from the U.S. Gulf Coast was a long-term strategy, given the 830,000-barrels-per-day Keystone XL pipeline project is now under construction.

“At this time, we are focused on working together with our partners on the immediate next steps required as we move forward with this initiative,” Irving’s MacLean said in an email.

In April, TC Energy secured a $1.5-billion investment and loan guarantees from the Alberta government and began construction on KXL pipeline, which is envisioned as a bullet line between Alberta and heavy oil refineries on the U.S. Gulf Coast.

Girling has previously stated that the Energy East project, which was proposed when Keystone XL was in regulatory limbo in the U.S., would likely not be revived given uncertainties associated with pipeline regulation on Bill C-69, a controversial legislation governing the energy sector that was approved by Ottawa last year.

TC Energy has also signed more natural gas customers onto its long-haul pipelines between Western Canada and Ontario, which would have been repurposed if the Energy East project was built.

Meanwhile, work on the 590,000-bd Trans Mountain Expansion project is also under way to expand crude shipments between Alberta and B.C.

Initially envisioned as a new export route to move Canadian oil to Asia, CERI’s Millington said the barrels on TMX could also make their way to the Canadian East Coast.