As you might expect, on Day 1 of the gathering in Beijing, the hallways were filled with discussions about U.S. President Donald Trump’s decision to withdraw the United States from the Paris Agreement. What, if any, impact would this have on the global transition to clean energy?

As we’ve documented in our annual Tracking the Energy Revolution reports, a confluence of economic, political, social and environmental forces have created the conditions to deliver $2 trillion of clean energy investment over the past five years.

“We underestimate the power of this energy transformation. You can’t model it…. It goes faster than expected…. It will happen, and best thing you can do is be at the forefront.”

1. With over 750,000 electric vehicles sold in 2016, raising the global stock to two million, the world is on track to hit a 2025 milestone for EV deployment consistent with the contribution required from the sector to limit climate change to 2℃ (the IEA’s modelled two-degrees scenario, or 2DS).

2. Similarly on track with the two-degree scenario is the contribution of energy storage technologies, which reached almost 1 gigawatt (GW) of deployment in 2016.

3. Strong annual capacity growth from solar PV and onshore wind was enabled by record-low long-term contract prices in Asia, Latin America and the Middle East. Both technologies have bright prospects, driven by cost reductions and policy improvements in key markets—putting them on track for levels of deployment consistent with the two-degrees scenario. That said, other renewable power technologies aren’t yet on track.

Thanks to this progress, global emissions have been flat for three years running, according to the IEA. Overall, however, most of the technologies that require deployment to achieve the two-degrees scenario are not yet on track.

Notably, this includes energy efficiency—for buildings, lighting, appliances, shipping, aviation and both light- and heavy-duty vehicles—which, according to the two-degrees scenario, would deliver a leading 40 per cent of emission reductions. 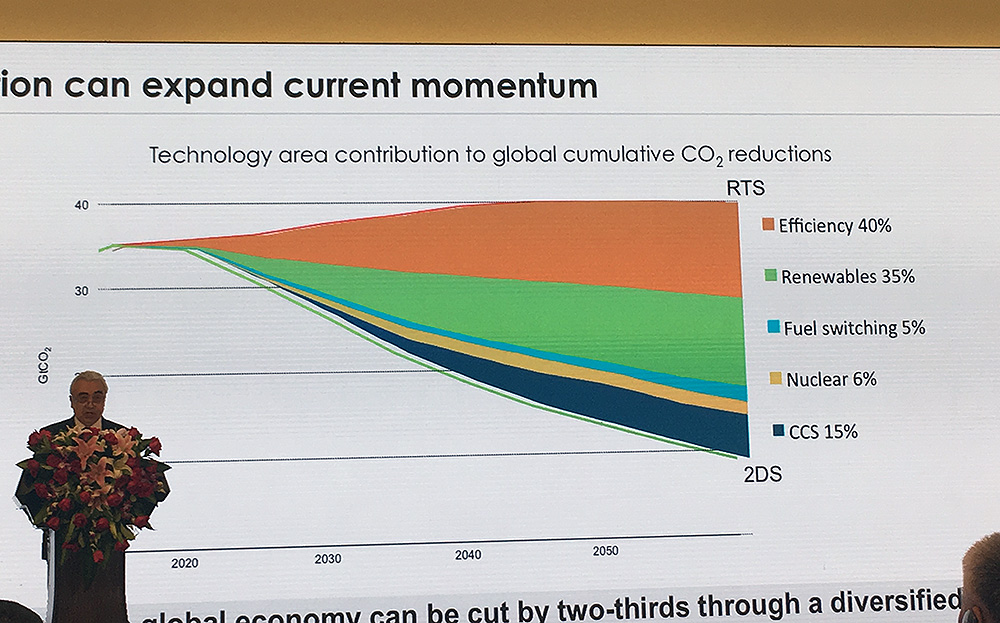 Research, development and deployment (RD&D) will be key to unlocking further technological progress—and will require significantly more investment from governments and companies alike. Within the energy sector, for example, corporate investment in RD&D remains dominantly focused in oil and gas, with more than twice as much investment as in clean energy.

Looking at combined public (which dominates) and private RD&D investment, the IEA has found it totals only $26 billion and has declined slightly from 2012 to 2015.  While $26 billion might sound like a lot, consider that the top three information technology companies in the world spend more than $40 billion per year on RD&D.

Despite the challenges that lie ahead, the atmosphere at the Clean Energy Ministerial is electric. As the minister of energy from Sweden, who will host next year’s Clean Energy Ministerial, noted, “We underestimate the power of this energy transformation. You can’t model it…. It goes faster than expected…. It will happen, and best thing you can do is be at the forefront.”

This article was co-authored by Dan Woynillowicz, policy director at Clean Energy Canada

Previous : China’s electric vehicle boom is paving the way for the rest of us
Next : U.S. State Department issues presidential permit for Enbridge line 67