The Notley government has been trying to build the case for taking aggressive action to create more value and find new markets for Alberta’s energy bounty.

Its interventionist blueprint calls for more petrochemical facilities to be built in Alberta by offering royalty tax credits, more refineries to be constructed and more upgrading to occur at home, with incentives acting as a lure to hook private-sector investment and jobs.

Some of it — such as last month’s sudden call for expressions of interest for more refineries — offers scant detail and seems to be built more on hope than homework.

The latest step in this “made-in-Alberta” energy strategy centres around the partial upgrading of bitumen and holds much more promise.

But it’s not without risk.

Premier Rachel Notley announced Tuesday in Calgary her government signed a letter of intent to provide a $440-million loan guarantee to Value Creation Inc., which is looking to construct a $2-billion partial upgrading facility east of Edmonton.

The privately held company is considering building the first commercial-scale partial upgrader in the world using its own proprietary technology. It would turn 77,500 barrels of bitumen per day into a higher-value medium synthetic crude and ultra-low sulphur diesel.

If the company decides later this year to proceed, the development would create an estimated 2,000 construction jobs and 200 full-time positions, once it starts operating in 2022.

Increased employment is only part of the appeal.

If partial upgrading technology can be fully commercialized and the benefits spread across the industry — through this project and others now under consideration — it would unlock greater value for oilsands producers and more revenue for provincial coffers.

“There is a promising set of technologies that are aimed at creating new upgraded bitumen products,” Notley told reporters.

“We have been spending, as Albertans, decades sitting around, wringing our hands over the fact that we are not getting full value — or anything close to full value — for the resources that are so fundamentally important to the economy.”

The NDP government is determined to promote the value-added component of the energy sector using public money.

It is providing $1 billion in royalty credits to build new petrochemical plants, and up to $1 billion in loan guarantees and grants through a separate Petrochemicals Feedstock Infrastructure Program.

Partial upgrading is the third leg in the energy diversification stool.

The technology is designed to reduce the thickness of molasses-like bitumen, requiring less diluent to move it through pipelines.

The idea of public involvement in partial upgrading was initially suggested in the province’s 2015 royalty review. Last year, the provincial Energy Diversification Advisory Committee said an immediate priority should be to support the commercialization of multiple technologies on this front.

“With additional access to markets, partial upgrading could dramatically increase the number of refineries we can sell our bitumen to,” it stated.

The Notley government promised last February it would offer up to $1 billion to kick-start partial upgrading on a commercial basis, providing $800 million in loan guarantees and $200 million in direct grants to several projects.

That’s the financial exposure for Albertans. But there are potential rewards to consider.

Alberta Premier Rachel Notley speaks during a Calgary press conference announcing more investment in upgrading and refining of oil within the province. The announcement took place at the McDougall Centre in Calgary on Tuesday morning January 22, 2019. Gavin Young/Postmedia

The technology would curb greenhouse gas emissions by up to 16 per cent per barrel, and partial upgrading is expected to increase pipeline capacity by up to 30 per cent as it lowers the need for diluent.

By improving the quality of the crude, the technology should also reduce the discount on the product.

In 2017, a study by the University of Calgary’s School of Public Policy noted there were more than 10 different partial upgrading technologies under development.

Based on building a single facility capable of processing 100,000 barrels per day, it concluded the value uplift could be as much as $15 per barrel of bitumen — and it would add $505 million annually to Alberta’s economy.

Report co-author Kent Fellows said Tuesday the province’s loan guarantee makes sense, as it helps reduce some of the risk to private investors who are typically wary of spending big sums on new technology.

“There is a lot of public benefit here, first and foremost in terms of getting more value for the resource,” he said.

Producers are also receptive to the concept.

Ben Brunnen, a vice-president with the Canadian Association of Petroleum Producers, said the announcement is intended to encourage investment “in value-added for our sector, so overall it’s a positive.”

However, any major government investment inherently comes with risk, as was seen with Alberta’s involvement in the bi-provincial upgrader in Lloydminster three decades ago, or the North West Sturgeon refinery today.

With a provincial election just around the corner, another consideration is whether this project would survive a change in government.

United Conservative Party MLA Prasad Panda said in a statement that, if elected, the party “will immediately review this proposed loan guarantee to assess its viability, and whether it is a prudent risk for Alberta taxpayers.” 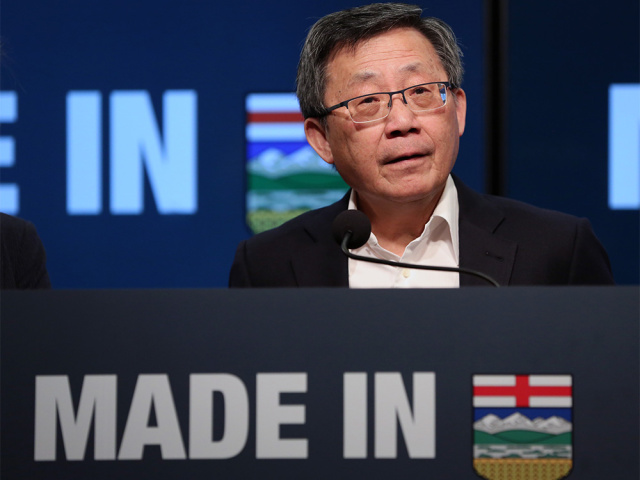 Columba Yeung, chairman and CEO with Value Creation Inc., speaks during a Calgary press conference announcing more investment in upgrading and refining of oil within the province. Value Creation Inc. is receiving a provincial loan guarantee to support construction of new upgrading infrastructure. The announcement took place at the McDougall Centre in Calgary on Tuesday morning January 22, 2019. Gavin Young/Postmedia

Yet, Columba Yeung, CEO and majority shareholder of Value Creation, appeared confident in the project’s future on Tuesday, declaring the proponents have already spent around $700 million and the development is “shovel ready.”

The company must still finalize all its financing, although the province’s loan guarantee will help assure private-sector investors about the future of the oilsands, he added.

If the government is going to invest or intervene in the energy sector, putting money into partial upgrading holds appeal with potential benefits for workers, the industry and the province.

But a $440-million loan guarantee still comes with plenty of risk for Albertans as we chase the elusive goal of generating more value in the energy sector.

And as more projects are rolled out by the government, the exposure keeps on growing.