Almost two-thirds of British Columbians believe the oil and gas sector is a critical industry to the country, according to a recent poll.

It’s more evidence that support is growing for pipelines and the importance of the energy sector to Canada.

Yet, that doesn’t always show up in the way elected officials act.

Consider that eight of nine councillors in the city of Victoria just voted to explore suing oil and gas companies for their part in climate change, prompting a sharp response from Alberta’s premier.

“The hypocrisy of this proposed lawsuit is astounding,” Rachel Notley said in a statement Friday.

“While Victoria is pumping over 100 million litres of raw sewage into the ocean every day, the hardworking people of our energy sector are reducing emissions, investing in clean technology.”

Victoria passed a resolution last week to track all of its costs tied to climate action, while the city strives to slash its own greenhouse gas emissions by 80 per cent.

Councillors also want to examine, through the Union of B.C. Municipalities, the prospects of local governments launching a class-action lawsuit against fossil fuel firms “to recover costs arising from climate change.”

The pronouncement comes just a month after the oilpatch pushed back against a move by Whistler’s council to send out letters to global petroleum producers — including Canadian Natural Resources — calling on them to pay their share of the community’s bills associated with climate action.

Victoria’s action takes the fight up a notch.

It is an attempt to recoup climate change costs from “the companies that have profited from the burning of fossil fuels,” Coun. Ben Isitt declared at a meeting last week.

The way Isitt talks publicly (he didn’t return several phone calls), only fossil-fuel companies are responsible for climate change or “profit” from producing products such as gasoline or plastics — not the consumers who use energy, the governments that tax it, or the other industries using fuel that emit greenhouse gases.

Yet, as Victoria’s own climate change plan points out, cities are a big part of the problem. They consume nearly 80 per cent of global energy and account for more than 70 per cent of GHG emissions.

If their own logic holds true, then shouldn’t the civic government consider suing itself?

“If they buy into the argument they’re making, one would suggest they might find a better approach of grounding all air traffic in Victoria,” said Mark Scholz, president of the Canadian Association of Oilwell Drilling Contractors.

To be clear, the industry needs to do more to lower its emissions. So do all industries, all Canadians, and all countries.

However, it’s awfully convenient to find a sole scapegoat to blame for a complex global problem that requires serious solutions.

As the International Energy Agency pointed out in a recent report, total energy demand is to grow by more than 25 per cent as the world is expected to add 1.7 billion people by 2040.

The question of who should pay will head to the courts sooner or later, he predicted.

“No one is saying taxpayers aren’t going to need to pay some of the costs here,” Gage said.

“The oil and gas industry cannot say we’re going to take all of the profits — make big profits from this product that we know causes these types of impacts — and we bear no responsibility for the harm.” 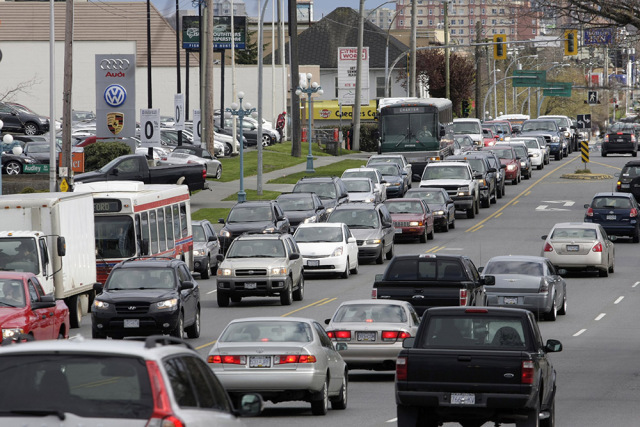 Rush hour traffic in Victoria. Should the transportation sector anticipate a similar law suit from the city?

But don’t hold your breath.

In the past, government and industry leaders haven’t spoken up enough about what they are doing to lower emissions per barrel or the broader importance of the energy sector to the country.

Those in industry and political circles are fighting back against motions such as the recent Whistler letter-writing charade and Victoria’s action.

“There is a well-orchestrated campaign that, at times, has been successful at attacking our industry. But then you see Canadians stand up, certainly in the Whistler example, very quickly,” said Canadian Association of Petroleum Producers president Tim McMillan.

“That sort of nonsense has to be called out and called out at the highest level of the political system,” Scholz added.

It’s the grandstanding aspect of Victoria’s action that led Geoff Young to be the only local councillor to vote against it.

As an economist, he supports a carbon tax to reflect the costs tied to energy consumption, but he thinks the notion of a class-action lawsuit is “nonsense.”

“Do we really want all of the energy providers, the oil and gas companies, to stop providing oil and gas to Victoria, or are we just posturing?” Young said.

“We’re suing them for doing something … but if they actually stopped doing it, our city would collapse into ruin.”

Other politicians are also speaking out.

After a news conference to promote public money for a solar energy project, Natural Resources Minister Amarjeet Sohi and Calgary MP Kent Hehr both poked holes in the notion industry should be sued.

“I don’t think there is a municipality or city or town that has not benefited from the prosperity and jobs and revenue that has been created by the natural resources sector,” said Sohi.

And that’s a vital point to remember.

But it’s not so constructive once it turns back at you. And it doesn’t solve a thing.