Here’s something that seemed unfathomable just a few months ago: Alberta could balance its budget books much sooner than anyone had expected.

In fact, it might happen in the next budget that’s coming out in just 40 days.

Now, a surplus isn’t my bold prediction for the new year, but it is based on analysis by University of Calgary economist Trevor Tombe. He did some interesting number-crunching this week, examining the impact of red-hot oil prices on the province’s finances.

With West Texas Intermediate crude closing at US$83.82 a barrel on Friday, a balanced budget for 2022-23 “looks entirely possible, if not likely,” he noted.

“Given where prices are — and where futures prices are projected to be — it might be hard to have anything but a balanced budget when they release it,” Tombe said in an interview.

“If the budget is not balanced, then it will be because the government chose not to report a balanced budget.”

The UCP government announced Friday the new fiscal blueprint will be released by Finance Minister Travis Toews on Feb. 24.

Pre-budget consultations are ongoing. Decisions will be made in the next few weeks on key price assumptions for energy commodities and revenues, said Toews.

“I am not going to make any projections or predictions on surplus or deficit for the upcoming budget year,” he said in an interview.

“I am going to say this: Over the course of the next year, a surplus within the fiscal year ‘22-23 is absolutely possible.”

Possible and probable are two different things, but the scale is starting to tilt towards likely, unless the province adopts extremely conservative price assumptions or books a large contingency expense.

It is a stark shift from the bleak days almost two years ago, when an oil-price war between Saudi Arabia and Russia was escalating and the pandemic started, sinking crude prices into negative territory.

The province’s deficit ballooned to almost $17 billion last year as revenues collapsed during the pandemic and resource royalties evaporated.

Today, global oil markets have largely discounted concerns about the impact of the Omicron variant on energy consumption.

Since the start of 2022, benchmark U.S. oil prices have shot up about 12 per cent. To balance the provincial budget for the fiscal year that begins in April, the province needs prices around $71 a barrel, Tombe said. 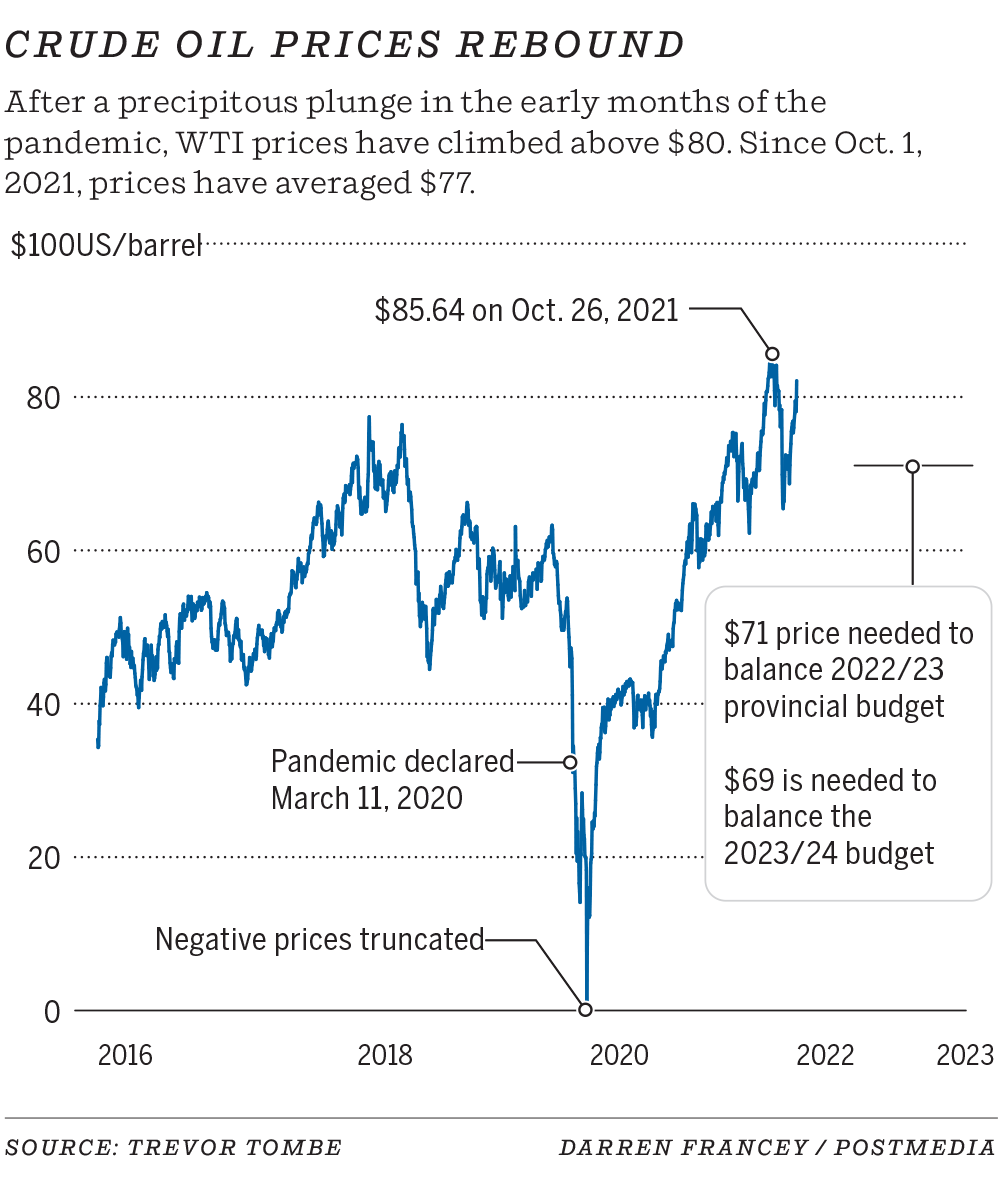 The 12-month forward strip price for oil on Friday sat at $79.72 a barrel, according to Peters & Co.

Higher oil prices in the past 12 months have already made an impact.

In November, the province’s mid-year fiscal update showed the 2021-22 deficit dropping to $5.8 billion, down from a jaw-dropping $18 billion from the initial projection made in last February’s budget. Bitumen royalties soared 413 per cent during that period.

The update also envisioned a $3.3-billion deficit in the 2022-23 budget year, based on WTI oil prices averaging $64 a barrel.

Every $1 jump in the price of oil over the course of a year will increase provincial revenues — through royalties, higher corporate taxes and personal income taxes — by $400 million to $500 million, Tombe estimated.

“Instead of the $3.3-billion deficit, we might be looking at something like a $3-billion surplus,” he added.

Tombe isn’t the only expert who sees a financial reversal on the horizon.

As energy commodity prices climb and the province’s economy expands — set to lead the country with GDP growth of six per cent this year — the prospects of a surplus are strengthening, said Conference Board of Canada chief economist Pedro Antunes.

“It wouldn’t take much, in terms of oil prices at $80 a barrel, to bring that into positive territory … It’s entirely possible,” he said.

“Not that long ago, we were looking at sustained $10-billion-plus deficits for a number of years.”

Credit rating agencies, which downgraded Alberta in recent years after oil prices fell and the province endured two brutal recessions, are also keeping an eye on the situation.

“The direction of oil has surprised on the upside and much of that is falling straight to the province’s bottom line,” said Douglas Offerman, an analyst with Fitch Ratings in New York.

“To the extent the province isn’t forced to go to the (debt) market to cover both operating needs and capital needs, it’s putting less of a burden on future budgets — and on future taxpayers.”

Balancing the books would also spark a new conversation that seemed improbable a year ago: What should Alberta do with any surplus?

Taxpayer-supported debt is expected to top $101 billion by the end of March. Debt servicing costs are nearing $2.5 billion annually, while interest rates are expected to increase in the next year.

However, inflation is also putting pressure on expenses.

“Once we are in surplus as a province, obviously at that point we have an accumulated deficit that we have to deal with,” Toews said. “But there will be decisions to be made around ultimately paying down debt, reinvesting in the Heritage trust fund.

“It will be a good day when we’re considering what to do with our surplus.”

A return to balanced budgets would also be a welcome sign for business operators.

Halting the long string of deficits would provide confidence to companies to make investments and hire staff by alleviating concerns about the need for higher taxes in the future, said Alberta Chambers of Commerce CEO Ken Kobly.

A new chamber survey of more than 340 business operators shows almost three-quarters say a balanced budget is important to them.

“It is top of mind for businesses at this time,” Kobly said.

“If businesses have to operate within their budget, so should their government.”