CALGARY — Jason Kenney, running to be Alberta’s next premier, is lunching on a salad at the Blackfoot Diner, a popular truck stop eatery just outside Calgary’s downtown, but offering red-meat economic policy proposals to his base in historically conservative Alberta.

While the province’s demographics and leanings are changing, and some of his United Conservative Party’s social policy proposals have met with staunch opposition and protests, his core economic promises of reducing corporate taxes, eliminating carbon taxes, and reducing regulatory timelines to encourage new investment are finding some currency as the economy sputters.

He is no ideologue, he says, highlighting that he agrees with his rivals in the NDP on “the strategic importance” of petrochemical diversification and he doesn’t want to “upset the apple cart” of gas-to-plastics projects in the province.

“I think we’ve demonstrated in my support for the federal acquisition of (the Trans Mountain pipeline) and oil curtailment that we aren’t going to be taking some kind narrowly rigid, ideological position on these questions,” Kenney said. “We’re prepared to be pragmatic.”

Kenney, 50, and Rachel Notley, the NDP’s popular 54-year-old leader running for a second term, agree on little else.

Edmonton-born Notley’s economic platform is focused on “a more directed, strategic approach” to investments and infrastructure in the province, centred on expanding the petrochemical subsidy program.

The contrasting styles have drawn comparisons with economic platforms of two popular former Progressive Conservative premiers — with pundits noting that Notley is channelling Peter Lougheed’s government-directed spending, and Kenney is inspired by the market-oriented policies of Ralph Klein.

To be fair, both the UCP and NDP have invited comparisons with Alberta’s popular past premiers on themselves. Notley has specifically referenced Lougheed in campaign speeches and Kenney has spoken of restoring the “Alberta Advantage” of low taxes championed by Klein.

The election on April 16 will determine which of the past premier’s economic visions will prevail. Unemployment stands at 7.3 per cent, real GDP growth will languish at 0.5 per cent in 2019, according to TD Bank Group forecast, and debt is estimated to be 80 per cent higher to $64.1 billion next year from 2014/15 levels. The way out of the morass isn’t all that clear given delays on all three active export pipeline projects. What’s clear is the province’s economy has not recovered to pre-2014 levels — both Kenney and Notley agree on this, too — and the electorate is seeking to vote on policies that can deliver a speedier rebound. 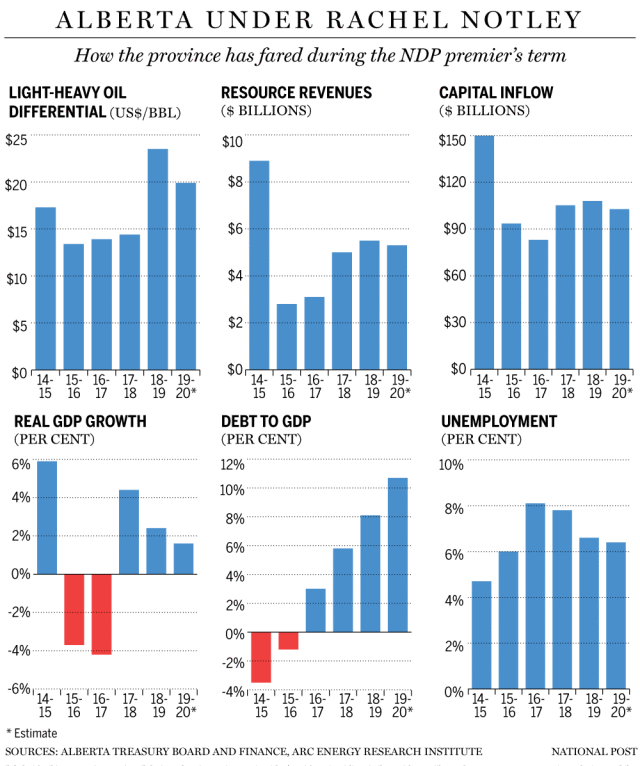 A week before calling an election, Notley stood in a southeast Calgary industrial fabrication yard against a backdrop of pipes to announce $70 million in royalty credits for an early stage, $600-million petrochemical plant proposal from Inter Pipeline Ltd. to produce acrylic acid, used to make plastic products.

The petrochemical diversification program has proven to be one of the NDP’s most popular economic policies. Days after the writ dropped, Notley said she would double the incentives available through it from $3.6 billion in total credits to $7 billion if re-elected.

“The more value add that we have in Alberta, the more we hedge against the price of the feedstock commodity going down,” Notley said in an interview, adding that she believes $7 billion in credits could attract $75 billion in spending on projects.

The province’s petrochemical program is one in a series of examples of the NDP focusing on “strategic investments” in industrial infrastructure that Notley says will pay for itself and return money to taxpayers. She has also pledged $1.3 billion to expand the province’s industrial highway network.

Given these promises, and what she invested in during her first term, Mount Royal University’s Bratt said Notley truly is “an heir to the mantle of Lougheed.”

In her first term, Notley formed a liquefied natural gas investment team to study the potential of Alberta supporting a project off the West Coast to lift local natural gas prices. Her government also announced a controversial plan to spend $3.7 billion buying railway cars to move crude oil out of the province amid steep discounts for domestic heavy oil.

Despite attempts to diversify the province’s oil and gas economy, Notley has been sharply criticized by economists for tabling a budget update right before the election that showed non-renewable resource revenues “appears quite important to the government’s deficit reduction plan,” according to a report from National Bank Financial.

“Fact is, over the coming six years, resource royalties are expected to outgrow the remaining revenue pie by a margin of 3:1,” the report from March 22 states.

Despite the big-ticket spending, Notley says her government still plans to balance its budget as planned in 2023, even with the promises made in this election campaign.

Regardless of whether there’s a return on investment, the level of spending has opened Notley and the NDP up to criticism that Alberta’s debt is on track to hit $96 billion by 2024.

Even though the province announced a lower-than-expected deficit for the current fiscal year, ratings agency DBRS kept its “negative trend” tag on the province given Alberta’s continued dependence on resource revenue amid higher spending, leading “debt-to-GDP forecast to reach approximately 20 per cent” by the end of this month.

DBRS cut Alberta’s credit rating one notch to AA in 2017, and said “Alberta’s fiscal outlook remains the weakest among all provinces, risks remain tilted to the downside.” The agency held its rating steady after the province’s 2018 budget.

Kenney believes the $3.7-billion oil-by-rail purchase is “the single largest expenditure in Alberta’s fiscal history” and vowed to scrap the deal if elected. “It’s a responsibility that belongs to the private sector and under the right market conditions, they’ll move more oil by rail,” he said.

Notley says Kenney’s promise to shred the deal is “ridiculous” and would end up costing taxpayers money and also “extend and expand” the need for oil producers in the province to curtail their production given a lack of new export pipelines.

But several executives in the energy sector have told the Financial Post, on condition of anonymity, they are concerned about cancelling the railway contracts and fear it would lead to another period of punishingly high discounts for Canadian oil.

“The industry is not unified on that proposal but we look at it as an insurance policy,” Explorers and Producers Association of Canada president Tristan Goodman said of the oil-by-rail deal. “We think we need an insurance policy involving rail.”

Energy investor Ninepoint Partners’ Eric Nuttall believes Kenney would back down from scrapping the crude-by-rail deal “despite what is being said on the campaign trail.”

“I appreciate his ‘free markets’ angle but this is one issue where, given how much of it has been screwed up by multiple levels of government, the risk/reward merits the continued involvement of the Alberta government into 2020,” Nuttall said. “It’s not a risk worth taking.”

Most economists and energy executives in Calgary are upbeat about other aspects of Kenney’s economic platform.

While Goodman wouldn’t comment on specific policy measures, the small- and mid-sized oil and gas producers he represents are looking for improvements on fiscal issues like taxes, on regulatory burdens and on new pipelines.

Research done by the University of Calgary’s School of Public Policy has formed the basis for much of the UCP’s economic policies so far.

The UCP asked School of Public Policy research director on tax and economic growth Bev Dahlby to study its plan to cut the corporate tax rate from 12 per cent to 8 per cent. Dahlby found it would lead to 6.5 per cent higher real GDP growth.

However, the school’s experts declined to comment for this piece over concerns they’d be seen as endorsing the party.

Given where the UCP is polling in Calgary, Kenney may not need an endorsement.

In the course of 30 minutes at the Blackfoot Diner, Kenney was interrupted by supporters wishing him well three times — a reflection of the UCP currently polling at 51.4 per cent support in the city, close to 17 points ahead of the NDP.

Kenney rolled out his platform before the writ dropped, announcing plans for cancelling the carbon tax, cutting corporate taxes and rolling back regulations.

“The fundamental difference I have with the NDP is that they seem to think the only way to diversify or get the economy going is to pick a handful of winners and losers. Our view is to get the fundamentals right,” Kenney said.

For her part, Notley doesn’t believe corporate tax cuts are an inefficient way to attract investment “particularly in a place like ours where we are already a very competitive province relative to other provinces around investment.”

“I don’t think, in the oil and gas sector anyway, it’s a particularly helpful strategy and I think a more directed, strategic approach will work better,” she said.

Interestingly, the corporate tax cuts espoused by Kenney could have a larger effect on investments in petrochemical projects than on upstream oil and gas producers.

Outside of the oilsands, few exploration and production companies have high corporate tax burdens because they reinvest all or most of their earnings into new production, said Tertzakian, who is one of the top energy economists in the country, and was a member of Notley’s oil and gas royalty review panel.

Kenney plans to announce additional policies about speeding up regulatory approvals at the Alberta Energy Regulator later in the campaign. “I want to meet or beat Texas when it comes to timelines and approvals and I truly believe we can do that without reducing health or safety standards,” he said.

Kenney, who was a prominent cabinet member of Stephen Harper’s federal government, has also promised to appoint a minister responsible for cutting red tape.

The former federal minister is looking to replicate “the experience of the (Gordon) Campbell Liberal government of B.C., which successfully reduced by 41 per cent the regulatory burden of the British Columbia economy, making them something of a model for North America.”

Experts in B.C. say, however, believe the Campbell government drew its inspiration from a neighbour.

Comparisons between Notley and Lougheed and between Kenney and Klein seem very accurate, but are also deeply ironic, Mount Royal University’s Bratt said.

Lougheed’s “fiercest critic” was Grant Notley, Rachel’s father, and at that time the NDP’s lone member in the legislature. Kenney, meanwhile, was a “thorn in Klein’s side” in the 1990s when Klein was in the premier’s office and Kenney was with the Canadian Taxpayers Federation.

Now Notley and Kenney are trying to channel Albertans’ fond memories of both former premiers, both deceased, as they seek the province’s highest office.

“The memory of Lougheed — it’s an older memory but it’s a less divisive memory than the memory of Klein,” Bratt said.