Oil’s meltdown spread in to the June contract as the price plummeted US$10 in New York.

West Texas Intermediate plunged below zero on Monday for the first time in history as May futures neared expiration, leaving traders in a panic as they tried to avoid taking delivery of physical barrels. On Tuesday, the losses spread to the following month’s contract — highlighting that a massive supply glut is driving the rout rather than a technical quirk.

The Texas Railroad Commission opted to put off a decision on whether to impose oil-production quotas. The state’s main energy regulator said it would not take a final vote on curtailing output during a closely-watched Tuesday meeting.

Oil is a “dangerous market to trade in right now,” said Pierre Andurand, founder of Andurand Capital Management LLP, in a Bloomberg TV interview. The market needs shutins to happen now, he said.

The collapse of later contracts underscored the severity of the crisis rocking oil in the age of coronavirus. Storage tanks, pipelines and tankers are rapidly being overwhelmed by a vast oversupply caused by slumping fuel demand as countries are locked down to contain the pandemic.

A lot of retail investors, especially those in the USO, after witnessing what happened to the May contract are trying to get out fearing that the same will happen in June, according to Tariq Zahir, commodity fund manager at New York-based Tyche Capital Advisors LLC.

We will never let the great U.S. Oil & Gas Industry down. I have instructed the Secretary of Energy and Secretary of the Treasury to formulate a plan which will make funds available so that these very important companies and jobs will be secured long into the future!

“A lot of retailer investors are looking at it and realizing that they are losing money hand over fist,” Zahir said. “It’s undeniable that the USO is having a having a very big effect on the June contract and it wouldn’t be surprising if we go substantially lower.”

In the market for global benchmark Brent crude in London, the immediate contract was at its biggest discount, or contango, to the following one in data since 2008. U.S. marker WTI’s June contract was halted three times early in New York to manage the volatility, CME Group Inc. said.

Brent crude futures for June slumped 29 per cent to US$18.20 a barrel.

The collapse is reverberating across the oil industry, with prices traded below zero across America on Monday. WTI Midland in Texas — a flagship marker for the U.S. shale industry — was at -US$13.13 a barrel, while crude in Alaska was at -US$46.63. 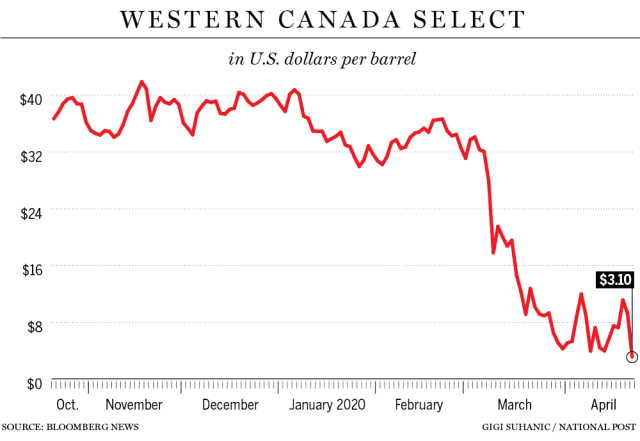 There are signs that these stunningly low prices are here to stay as tanks across the globe fill up. Royal Vopak NV, the world’s biggest independent storage company, said almost all of its space is sold.

Crude stockpiles at Cushing — America’s key storage hub and delivery point of the WTI contract — have jumped 48 per cent to almost 55 million barrels since the end of February. U.S. nationwide inventories are estimated to have increased another 14 million barrels last week, according to a Bloomberg survey.

Countries fighting the virus pandemic have been on lockdown for weeks, drastically cutting road and air travel and stopping most economic activity. Many governments are extending confinement measures, further ravaging demand.

It is forcing refineries from Asia to Europe and the U.S. to use far less crude. Portuguese processor Galp Energia SGPS SA said Tuesday it will suspend operations at its Sines refinery for a month as its storage tanks are nearly full.

The speed and scale of the crash has been so massive that it has left plans for unprecedented production cuts by OPEC and its allies completely ineffective. To make matters worse, the supply reductions only start from next month, and the current market continues to be awash with crude.

Saudi Arabia said it is ready to join OPEC+ for more measures to stabilize the oil market. Russia said that it is monitoring prices closely, but hasn’t decided on Venezuela’s call for an OPEC+ committee meeting.

“This is the kind of price that focuses minds in oil-producing nations, and minds are so focused they’re probably telekinetic at this point, or at least bending spoons,” said Kevin Book, head of research at ClearView Energy Partners.