The Creekside Solar Now installation features a total of 60 solar PV modules mounted on six boat sheds, with a generating capacity of 2.5 kilowatts per shed. That’s more than enough energy to power almost two single family homes in B.C. The system will feed 459,000 kWh of clean electricity back into the grid over its lifetime, and help to offset a portion of the energy used at the nearby Creekside Community Recreation Centre. Over 30 years, Creekside will generate $62,000 in electricity at current utility rates.

Clean Energy Canada is also working with the Vancouver Public Library to install solar panels at the main downtown location, as part of the expansion project, which will also include a rooftop public garden. The expansion is expected to be done in 2018.

By putting solar energy systems in high-profile public spaces, Solar Now aims to spark a conversation about how Vancouverites can benefit from switching from fossil fuels to solar-powered electricity.

As part of Vancouver’s Greenest City Action Plan, the City has a goal of eliminating Vancouver’s dependency on fossil fuels. In 2015, Vancouver City Council adopted the Renewable City Strategy (RCS) – Vancouver’s 30 year plan to help us achieve this goal by reducing energy use and then transitioning to 100 per cent renewable energy. Vancouver is committed to reducing our carbon emissions by 80 per cent before 2050.

The Solar Now Creekside project was made possible through collaboration between the City of Vancouver and the North Growth Foundation, with support from Clean Energy Canada (a project of the SFU Centre for Dialogue), the Great Climate Race, Bullfrog Power and the Community Energy Association. 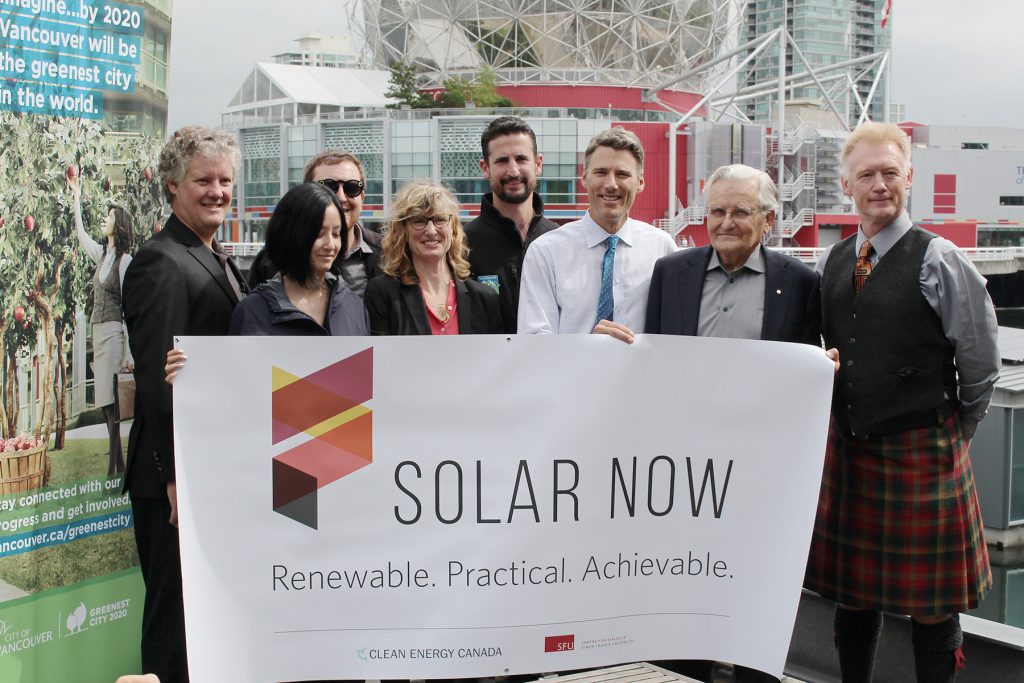 “Vancouver is committed to be fossil-fuel free by 2050 (or sooner), and projects like Solar Now are terrific examples of how renewable energy is an efficient, affordable solution to reducing Vancouver’s climate pollution. By creating enough energy to power a small neighbourhood block, Creekside’s Solar Now will make power cheaper and cleaner in False Creek, contributing to a healthier city for years to come.”

“Renewable energy is ready for primetime, and projects like Solar Now can help make that real for people. Clean energy is an investment that pays off—not just by providing affordable, reliable power but by creating jobs and sparking new areas of economic growth for British Columbia. Vancouver’s commitment to 100 per cent renewable energy puts our city at the forefront of the clean energy transition, and in the company of leading cities around the world.”

“Solar Now is leading by example with practical ideas to tackle climate change. It has become evident that we can be independent of fossil fuels by 2050, by transitioning to solar, wind, smart grids and new storage technologies. The solar panel installation at the Creekside Paddling Centre demonstrates that we have the technology, and encourages people to adopt it.”

“Solar power keeps getting more affordable, and once you install the technology, the fuel — sunlight — is free. As homeowners and businesses invest in renewable energy, they start to pay more attention to how much electricity they use, and that often leads to less energy being wasted in the long run. Renewable energy is a sustainable and cost-effective way to meet and diversify our electricity needs, and it can help us combat climate change.”

“Climate change affects all of us and we all have to do something about it—which is pretty daunting. We started the Great Climate Race to help people rally around solutions to climate change in their own communities, and Solar Now helps make that vision real by bringing people face-to-face with clean energy. It’s exciting to see these solar panels go up at Creekside and to think of all the people who will pass by this location on foot or by bike each day.”

For more information about the Renewable City Strategy, visit vancouver.ca/renewablecity 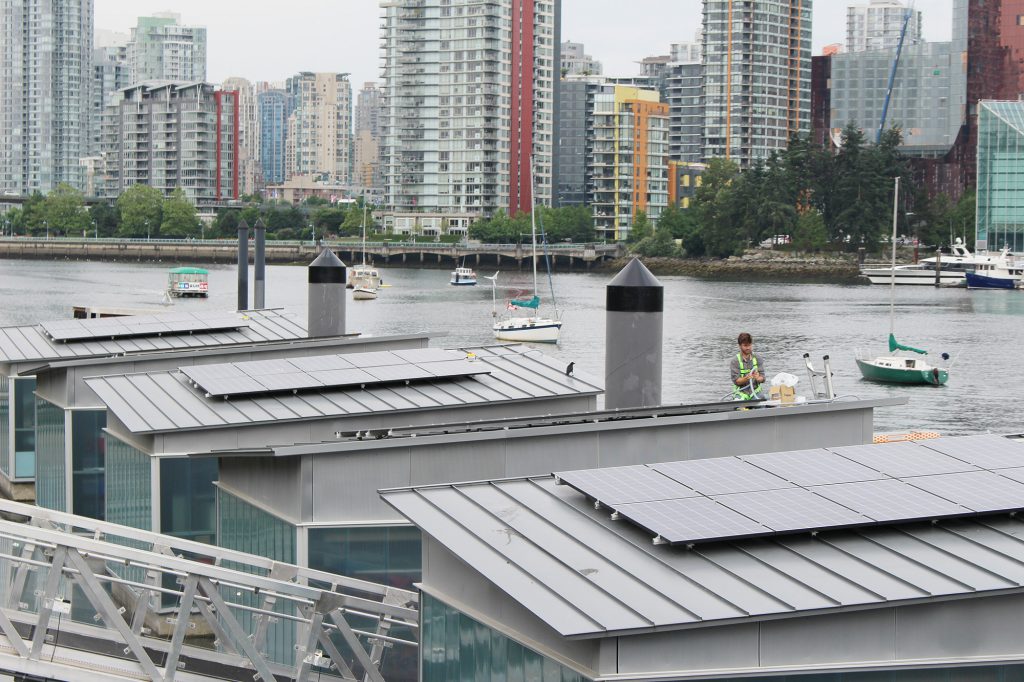 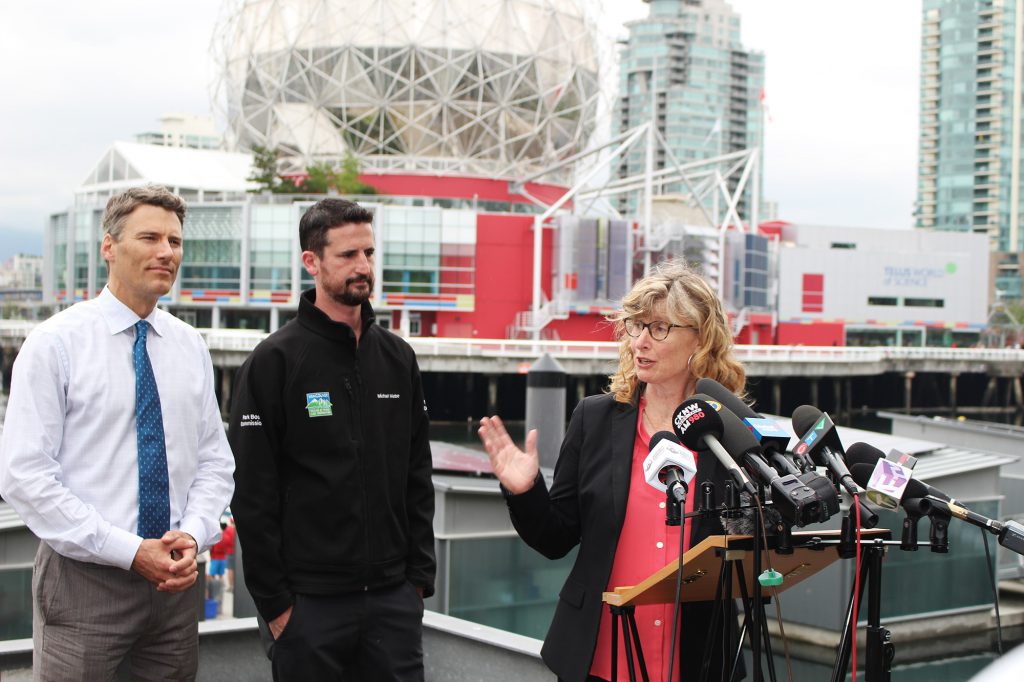 Previous : How Canadian mines could supply the clean energy transition
Next : When the oilsands hit pay dirt