What was meant to be a unified show of support for the energy industry at a rally Monday at times turned contentious, with one city councillor abruptly ending his speech midway through and the mayor sometimes being booed during his remarks.

The pro-pipeline event, which was supported by all 14 Calgary councillors in addition to Mayor Naheed Nenshi, was organized by Canada Action, a movement that supports the natural resources sector. Thousands turned out at Municipal Plaza over the lunch hour, chanting “Build Our Future” as the rally got under way.

But some members of council were heckled as they stood at the podium to declare their solidarity with those in the struggling oil and gas sector, including Coun. Peter Demong.

“This is not a time to be talking about boycotts or trade embargoes. We want to encourage trade, not restrict it,” Demong said, describing Alberta oil as “one of most ethical sources of energy on planet.”

“Wow. Really? And you guys call yourselves Canadians? Wow,” said Demong, before stepping away from the podium.

Nenshi, who immediately took over, faced a mix of cheers and discontent from the audience.

Nenshi said it’s also important to note that “standing up for Canadian energy doesn’t mean we don’t believe in and care about climate change,” a point met with some booing.

“Well, for those of you who are saying, ‘No I don’t believe in climate change,’ good luck changing hearts and minds because we have to be able to say that there is no difference between standing up for the economy and standing up for the environment,” he said, as jeering turned to applause.

“We can do both and that’s what people in the oil and gas sector do every single day.”

Later booed again as he began delivering remarks in French, the mayor had a message for the crowd.

“Let me give you a little bit of advice,” he said, switching back to English. “If you want someone to listen to you, you have to speak their language.”

Frustrated rally attendees — holding pro-energy signs with messages ranging from “I (heart) oil & gas” to “Quebec hypocrisy” — said feelings of Alberta separatism are as prominent as they can recall. They said Prime Minister Justin Trudeau and the federal government are to blame for the predicament in which Alberta finds itself.

“They won’t get my vote next time,” said Pat Fryers, who added that Premier Rachel Notley has been “a great spokesperson for us.”

Fryers said she attended because the pipeline is “a product that our country needs” to be economically successful. Her son, a geologist, finds himself unemployed due to the state of the economy, she added.

The rally was also attended by Alberta energy minister Margaret McCuaig-Boyd, who dismissed the notion that divisiveness, and even separatism, would in any way help Alberta’s energy sector.

“I don’t think that’s the solution,” McCuaig-Boyd said. “I think we’re always better together to work. I’m a proud Canadian. Despite the frustration I feel about how we’re being treated in Alberta, I’m still a proud Canadian. . . When we’re divisive, we’re not going to get anywhere.”

Fryers said she hoped Calgary’s municipal leaders could help push the issue with their counterparts across the country.

“I’m not sure what they will be able to accomplish but I think it’s good that they’re here with the rest of us,” Fryers said. “Hopefully they can influence in their own way towards getting us a pipeline built.”

A motion urging council to declare its support for Alberta’s energy industry was also passed unanimously in a 15-0 vote at Monday’s meeting, but not before it underwent some significant tweaks on council floor.

Councillors endorsed key clauses including a declaration that the steep differential for Canadian crude constitutes a “crisis” for the country, and that council “unequivocally” declares support for Alberta’s energy sector.

Large parts of the rest of the motion were referred to council’s Intergovernmental Affairs Committee for further work.

The wording of the proposal, initially brought forward by Coun. Jeromy Farkas, provoked some annoyance from his council colleagues. 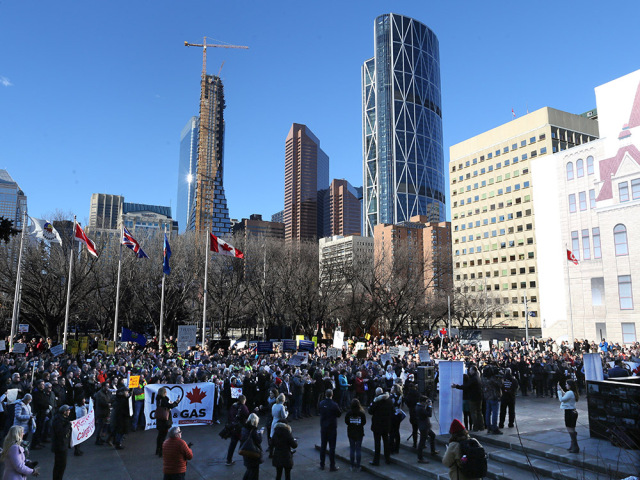 About 1,000 people turned out for the pro-pipeline rally at Calgary city hall on Monday.

Nenshi called it “factually incorrect,” pointing out that a total of $50 was spent by one councillor to attend a workshop about an environmental strategy document called the “Leap Manifesto.”

“I don’t accept notices of motion that have factual inconsistencies in them, especially from someone who is decrying misinformation,” Nenshi said Monday. “Take it out.”

— With files from Meghan Potkins